The typical dynamic consumption-saving under certainty model can be written as:

Where $T\leq \infty$ (finite or infinite horizon), $\beta \in (0,1)$ is the subjective discount factor, $y_t$ is the individual's income and $c_t$ is the individual's consumption in every time period. Finally, $u(\cdot)$ is the agent's subutility function, with $u^{\prime}>0$ whose concavity is usually related to the agent's preference for consumption smoothing. The argument is equivalent to the one justifying that an individual will reveal risk aversion iff his utility function over wealth is strictly concave. The argument that leads to consumption smoothing is the following: The first order condition for the problem is the well known Euler equation

I have two questions regarding this argument which are somehow related:

If my thinking is correct this would imply that the desire for smoothing doesn't play any role on what the individual does at the end, as this possibility is open only when $\beta =(1+r)$ holds, and furthermore, it would be optimal to smooth out consumption even to an agent with a strictly convex utility function.

Although it is true that the First order Conditions for a strictly convex utility function will yield the same solution as that of a strictly concave one, the second order conditions are entirely different. Instead of finding a maximum, you are indeed finding a minimum. In other words, FOCs are necessary but not sufficient.

Intuitively, a strictly convex function means the marginal utility of consumption is increasing. As such, you would like to allocate as much consumption to a given period as possible.

For instance, take $u(c)=c^2$. Although it is still mathematically true that $u(c_{1}) = u(c_{2}) \Rightarrow c_{1} = c_{2}$, allocating one more pound/dollar/etc from, say $C_{2}$ to $C_{1}$ would increase the present value of your lifetime consumption. You can see this below, by comparing the case of consumption smoothing (c) with the average of non-smoothing (shifting consumption from one period to the other). The utility of the former is below that of the latter. Thus, you would rather allocate all your lifetime wealth to a single period. 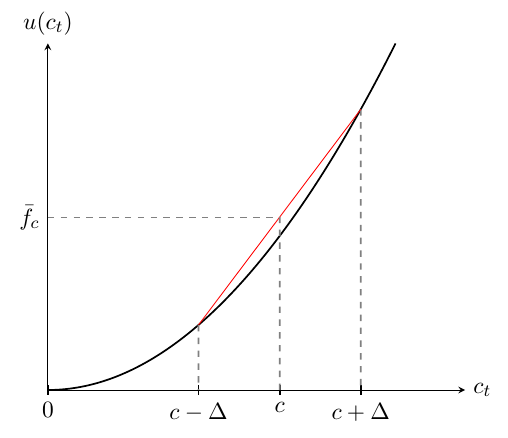 However, in this case $U^∗=1/2$, which is smaller than simply setting, say $x^∗=1$ and $y^∗=0$ (which gives $U^∗=1$). What is going on? Here, you can show that the SOC is positive, which is not the case of a maximum, but actually, of a minimum. So actually, the optimisation problem (what this exercise truly is) is that of a minimisation.

The argument relayed in the question as regards consumption smoothing is flawed. Consumption smoothing does not mean consumption equality over periods, but rather, tendency to avoid corner solutions, or near-corner solutions. So it has nothing to do with whether, in the context of this family of models, $\beta (1+r) =1$ or not (after all, in a more comprehensive model, this condition is the long-run equilibrium one, and it does not hold for the transition towards equilibrium).

Consumption smoothing in the intertemporal setting has similarities with "variety in consumption" in a static setting with more than one goods: there, with a concave utility function, we get convex indifference curves and so interior solutions, i.e. a solution where the consumer consumes a mix of goods available, not just one, or very few of them, given the linear budget constraint

As general equilibrium theorists point out, timing of consumption can be seen as just one more feature of a good, and so, when the same good has a different "consumption time stamp", it is a different good after all.

So, in the basic two-period setting, we have a bivariate intertemporal utility function

To examine its indifference curves we fix the value of the function at $\bar U$ and we examine the second derivative of $c_2$ with respect to $c_1$:

For the indifference curve to be convex we need this derivative to be positive, and so we need the second derivative of the period-utility function $u$ to be negative, $u''()<0$.

Then with a linear budget constraint with negative slope (say for exogenous endowments per period),

we can get the familiar graphical solution of interior tangency at the optimum, which excludes corner solutions we would have obtained if the indifference curve between present and future was concave (and so the period-utility function was convex).

So it is all about the utility function and has nothing to do with the Euler equation taking a specific value.

Not the answer you're looking for? Browse other questions tagged mathematical-economics utility consumption dynamic-optimization or ask your own question.