When would prices increase according to Malthusianism?

Malthusians and Neo-Malthusians believe that, eventually, the population of the earth will be exceed the number of people able to be sustained by the earth's food production. As such, they advocated different forms of population control.
However, it appears that an increase in the population beyond that of the food supply would cause an increase in the overall real price for food.
Proponents of Malthusianism, evidently, are not waiting for food prices to rise before advocating population control, but I do not see how we should be worried until the real price of food increases.
If Malthusianism is correct, how soon before the population crash would prices begin to rise?

This question rests on a few assumptions.

So let's dig into them.

In accordance with the theory, cross-country evidence indicates that technological superiority and higher land productivity had significant positive effects on population density but insignificant effects on the standard of living, during the time period 1–1500 AD. In addition, scholars have reported on the lack of a significant trend of wages in various places over the world for very long stretches of time. In Babylonia during the period 1800 to 1600 BC, for example, the daily wage for a common laborer was enough to buy about 15 pounds of wheat. In Classical Athens in about 328 BC, the corresponding wage could buy about 24 pounds of wheat. In England in 1800 AD the wage was about 13 pounds of wheat. In spite of the technological developments across these societies, the daily wage hardly varied. In Britain between 1200 and 1800, only relatively minor fluctuations from the mean (less than a factor of two) in real wages occurred in Britain. They peaked at around 1450 and in 1800 they were actually significantly worse.

So to go back to the source, Malthus didn't predict a population explosion at all (or food price rises for that matter). In fact, his theory was specifically that population growth fluctuated with economic development such that the prices of wheat (in terms of wages) remained relatively stable over two millennia.

This was known as the Malthusian Trap, where technological advancement would always be matched by (not exceeded by) population growth, resulting in the stagnation of living conditions.

Since the time of Thomas Malthus, new evidence has emerged that, while the trap may exist, many societies break out of it, and achieve explosive growth in living conditions. This is generally termed, the "breakout". In A Trap At The Escape From The Trap?$^1$, Andrey Korotayev suggests that this breakout leads to social upheaval, and may have played a role in events like the revolutions in Latin America, or possibly even the formation of the US. Unfortunately if we delve too far down the social macroevolution road we wind up having to have the Guns, Germs, and Steel discussion, and that's straying dangerously off topic, though I also want to throw in a reference to Huntington, as another great and accessible read on the really big picture.

But moving back to your assumptions. Let's assume that population and technological growth became uncoupled by the "breakout". Now all of a sudden standards of living are at all time historical highs. Under Malthus we would expect the population growth rate to also be at historical highs.

In fact much of the developed world is at "peak population", facing major demographic shifts as baby-boomers age out of the workforce faster than they are being replaced. Japan faces a "demographic crisis"$^2$$^3$, the US shows substantial aging and even China's growth rate has slowed dramatically and is now lower than the US's.

In fact, according to the UN, the projected world population over the next several decades looks like this: 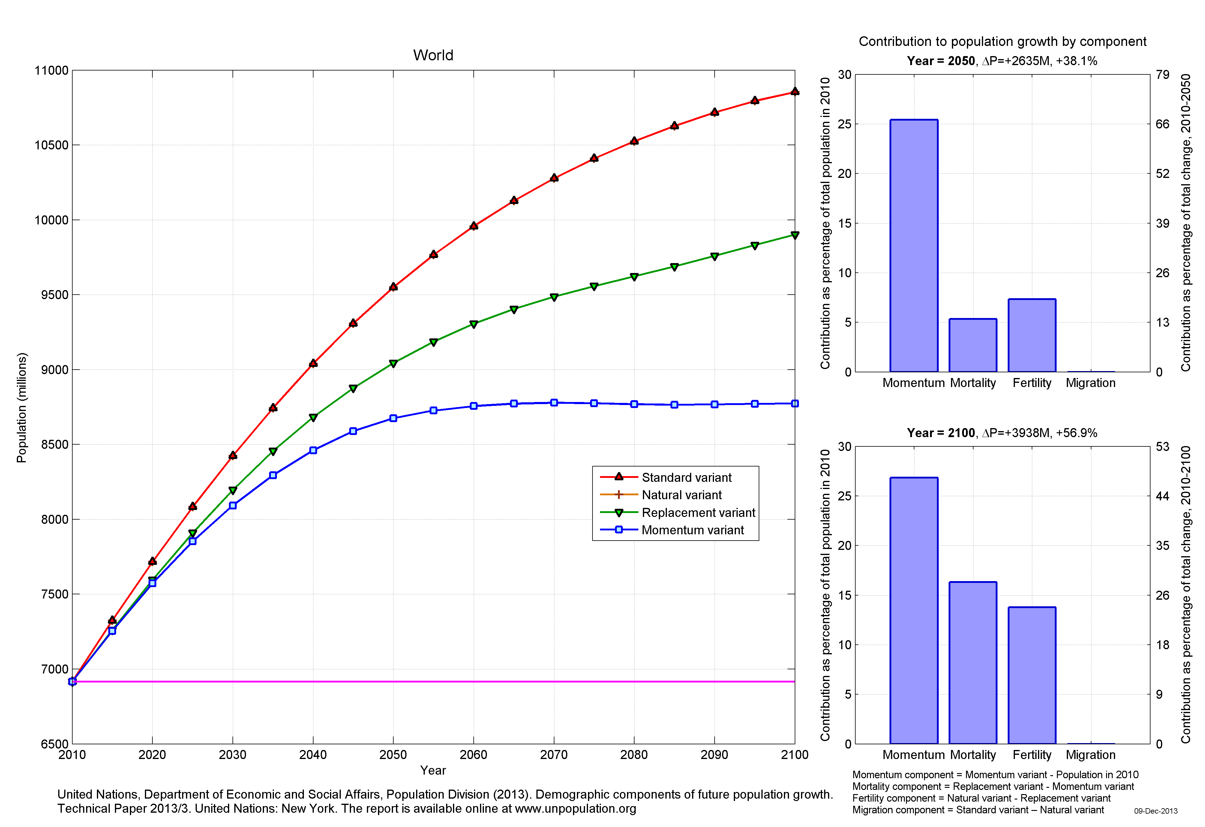 Which you may notice is not an explosive growth. For more information on this, I'll defer to the experts at the Population Division of the Department of Economic and Social Affairs, and their technical paper

Cause and also Cause

Lastly, you're assertions rely on the assumption that increased population means food prices go up.

But that's not how numbers work.

Prices are denominated in currency.

More people (without a correlating rise in currency), actually means there's fewer dollars per person. In that scenario, food prices would go down (although probably slower than wages), leading to shortages. Price is a way of rationing scarce resources, but it's not the only way. The other way to ration is queueing, or shortage. This is what we see happen in developing nations. Rice is not more expensive, there just isn't enough rice there.

In the event that the population increased, and central banks also increased money supply, than standard economic models would predict that the prices of all commodities (not just food) would rise, since the relationship to amount of quantity over the amount money would have changed, or roughly

This would be conformant with standard economics, and not reliant on a Malthusian population collapse.

The only way we would expect prices to rise dramatically without central bank intervention would actually be after the collapse, as people accumulated currency, and would trade more currency for food.

In the event of a zombie or post-nuclear apocalypse, cash will decline in value relative to commodities, so stock up on rations and bullets because dollars won't help.$^4$

$^3$: Current research. You'll have to take my word or pull the data from St Louis Fed and BLS yourself.

Not the answer you're looking for? Browse other questions tagged supply-and-demand price-level or ask your own question.

2
Is Price Level equivalent to Inflation when looking at AD/AS and Phillips Curve graphs?
0
Significance of Y-axis in Aggregate Supply curve (AD-AS model)
2
Why does an increase in money cause a proportionate increase in price level according to classical/neoclassical economists?
1
What is autocorrelation of prices?
9
Why does the Brexit cause a fall in crude oil prices?
1
Why the prices for very popular items do not increase?
0
Why hasn't the huge increase in supply provided by Airbnb decreased prices?
6
Why do some businesses choose scarcity as their business model instead of raising the price to meet the demand?