Usage of natural gas in 1970 (where was the demand elasticity?)

The following historical graph of US Marketable Natural Gas volume has me puzzled: 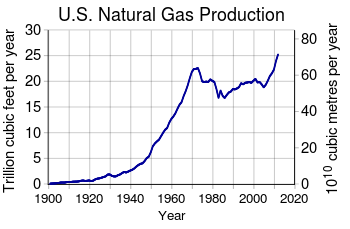 How was the gas used in 1970 (a peak production period), given that we would seem to be using a lot more gas now? Normally, I think of natural gas as having relatively inelastic demand because it relies on fixed distribution networks which are time-consuming and expensive to build.

In 2010, the graph shows less gas being produced than in 1970, but considering the huge increase in the retail use of natural gas for heating in recent decades, how can this be? Apparently there was some huge, elastic demand in 1970, which I presume was some industrial process. What would that have been? Before you say "power generation" look at this graph: 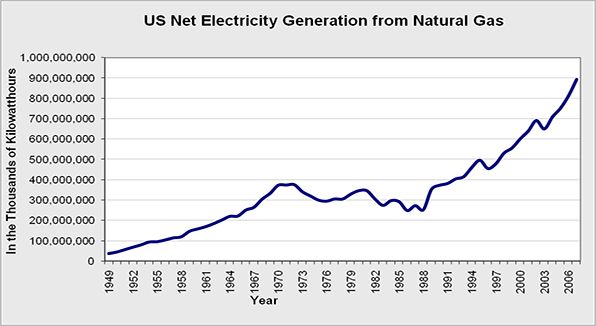 So, we are using a LOT more natural gas now compared to 1970 both in homes and for power generation. So, what is this huge extra use of natural gas in 1970? Where was it going?

I think there may be some misunderstandings. Firstly: the first chart shows domestic gas production. "Domestic" doesn't refer to residential-only use - it just means natural gas produced within country, rather than imported by pipeline or on ship. Secondly: the second graph does not show the amount of gas uesd to generate electricity. It shows the amount of electricity generated by gas. There's a huge difference. The latter is the former multiplied by the volume-weighted efficiency of the generation fleet. And thirdly, you discuss the lack of responsiveness because of the need for gas infrastructure, but the period under consideration is 40 years, which is the long run: that's sufficient time for replacement of capital; pretty much all costs are variable over 40 years in gas.

Natural gas gets used directly for heating, including in industrial processes; it also gets used for electricity generation. The latter also had a local peak around 1970. The amount of electricity generated by gas turbines very closely tracks domestic gas production until about 1990.

What's happened over the last 40 years is that energy efficiency has improved. There has been fuel-switching, so that some processes that were done using gas now use coal or electricity; and some processes that did use coal now use gas. There have been net efficiency gains over time, just as you'd expect. Some of this was outside the residential sector, and some is within it.

Some energy efficiency improvements have come about through improvements in boiler technology such as the mainstream appearance of condensing gas boilers; as well as a better understanding of maintenance. And improvements in building heat tightness, from enforced tighter building controls, better materials, better construction techniques. In the UK, we've also seen the replacement of open gas fires with central heating systems, which tends to be more efficient too, and that may have played a role in the USA over the last 40 years.

And particularly, from 1990, the upward trend in electricity generated from gas (the second graph) is stronger than the domestic increase in gas production. Around 1990, there was the introduction of a new type of process, the combined cycle gas turbine (CCGT), which increased the gas-to-electricity efficiencies from around 30% to around 55% - i.e. almost doubling. By 2007, CCGTs had displaced pretty much all the old open-cycle turbines, resulting in almost twice the electricity generated from the same amount of gas.

Not the answer you're looking for? Browse other questions tagged microeconomics supply-and-demand usa energy-economics commodities or ask your own question.