GDP calculated using expenditure apporach is like this: GDP=C+I+G+(X-M) However on this site: http://www.singstat.gov.sg/statistics/visualising-data/charts/share-of-gdp-by-expenditure

The data is avaialable for C, G and net exports, but there are two variables: Gross Fixed Capital Formation and Changes In Inventories. Since there is no 'I' variable, can I assume that the sum of those two variables are equal I?

The authoritative source here is the United Nations System of National Accounts, SNA.

The basic principle underlying the measurement of changes in inventories of finished goods is that output should be recorded at the time it is produced and valued at the same price whether it is sold, otherwise used or entered into inventories for sale or use later. In effect, goods only enter inventories when they are not immediately used for sale or other use in the period they are produced. Similarly, goods are withdrawn from inventories when the demand for the goods exceeds the amount produced in a period. No output is recorded when goods produced previously are withdrawn from inventories and sold or otherwise used unless a storage activity as described be low in section F takes place.

Second, the components of "Investment" (officially called Gross capital formation), as stated in page 282 of the aforementioned document is:

This and following pages go about explaining each of them, and how to measure them.

Finally, the document provides a worked example of the table of "uses of output" (the expenditure approach of GDP). Here is a screenshot of a section of that worked example, presented in page 291. You can see that change in inventories are indeed treated as part of "Gross Capital Formation": 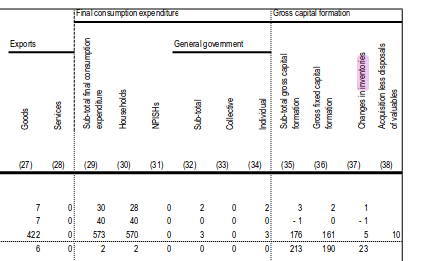 1
How Does GDP Differ From NNW as an economic measure?
4
Why is GDP equal to the sum of revenues?
4
Why use the income approach to approximate GDP if it relies on the value produced by the expenditures approach?
3
What's the difference between gross fixed capital formation and gross private domestic investment?
1
GDP per capita and trade relationship
2
Congruence of GDP as calculated by production and by consumption
0
Do I make correct conclusions about international trade (and ways to increase GDP) from the expedenture approach formula for GDP?
0
Assumptions in GDP calculation
1
Treatment of natural disasters and wars in consumption of fixed capital