What is the actual paradox in the Paradox of Thrift?

I understand most of the reasoning, but don't understand what the actual paradox here is, as I believe there can be up to three potential paradoxes:

I'm sure it's one of the three, as they were commonly repeated when I did some research on the internet, but can't quite make out which one it is.

macroeconomics saving
Share
Improve this question
asked May 3 '17 at 6:29

The Wikipedia article has several different quotations over time, though I would state the claimed paradox as a variant of (2), possibly something like 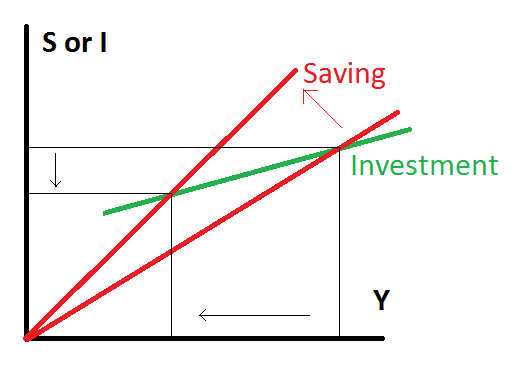 which suggests that the paradox seems to depend on the the combined relationships between income and savings and between investment and output, together with some macroeconomic tautologies. If the relationships were different, or if the tautologies did not cause changes in equilibria, there might not be a paradox

The paradox is that as people attempt to save more, the total amount of savings decreases.

Before I explain how this can be so, we need to understand a couple of things:

First of all, when economists talk about savings in aggregate, they consider the full spectrum from at one end saving a lot, through zero savings (quickly spending exactly what you earn) through to the opposite of saving - which is borrowing. I.e. "borrowing less" can be described as "saving more". Similarly the process of repaying existing loans will be described by economists as "saving more".

Then you need to consider the effects of our "fractional reserve banking" monetary system. In this system loans create money and repaying loans destroys money. This means that if an economy moves to a state where the rate of repayments of existing loans is greater than the rate of taking out new loans then the money supply will shrink (at least without any QE or similar).

Put these facts together and we can have a situation where we have "more saving" (which to an economist may just mean less borrowing), leading to a shrinking money supply. Given that savings are money - then if there is less money around then our ability to save as much as before, diminishes.

Not the answer you're looking for? Browse other questions tagged macroeconomics saving or ask your own question.

14
Larry Summers on the causes of secular stagnation
1
What's the actual relationship between deflation, spending and saving?
1
What is the difference between 'actual' and 'potential' interaction between buyers and sellers?
3
What does it mean when the natural rate of unemployment is greater than the actual rate?
1
The growth rate in the Solow model
0
The relationship between profit and wages
2
Why do many papers not write the actual utility function?
3
Do open market operations permanently increase the money supply?
1
long run growth of money supply