I assume that you're interested in gross value added as a national accounting concept (which is the most frequent use of the term). In that case, it is formally defined by the UN's System of National Accounts as "the value of output less the value of intermediate consumption". Here is a table from the freely available old version of Understanding National Accounts showing this breakdown for the nonfinancial corporate sector of France:

This definition is made on the production side, but gross value added can also be broken down into income. On the income side, it includes worker salaries, as another account excerpted from Understanding National Accounts shows: 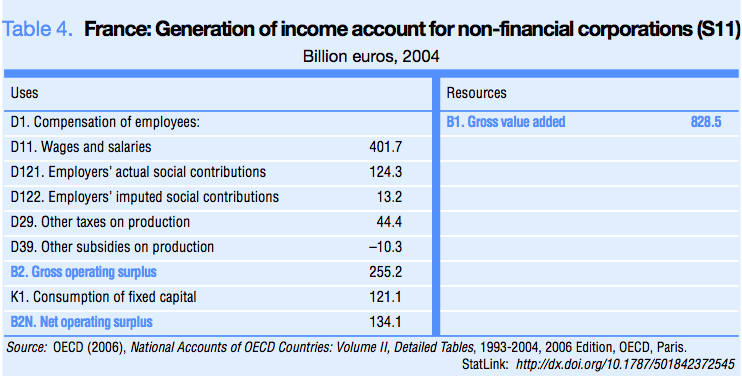 Combining Tables 3 and 4, we see how the initial "output" accruing to a firm can be progressively whittled down:

Finally, note that all these definitions are quite generic and meant to apply to many levels of aggregation: firms, industries, areas, sectors, or entire economies. The tables with gross value added above show the "production" and "generation of income" accounts for the non-financial corporate sector, but all national accounts constructed using the same principles provide an analogous account for other sectors—including households, government, the total economy, etc.

Looking at a Profit & Loss statement of a company,

It essentially is this concept that coincides exactly (in a narrow sense) to the fundamental production function with constant returns to scale, and factors of production only Capital and Labor, that moreover are being paid their marginal product:

Due to homogeneity of degree $1$, we have the production function

So all of $Y$ goes to the factors of production that appear in the right-hand side.

But $rK=$ Depreciation Charges + Profits (or minus Losses), and $wL=$ Personnel Costs. So in reality, $Y$ is Value Added rather than Gross Sales (and most econometric studies where production functions are estimated, regress Value Added on labor and capital, rather than Gross Sales). An issue here could be how one views interest costs, which are also returns to capital (irrespective of the fact that they do not belong to the shareholders -the company employs this capital and pays a fee for its use)

Of course the concept of production function can be enhanced to include separately materials and energy for example, in which case the appropriate dependent variable becomes Gross Sales.

1
What is considered a “final product” for gross domestic product?
5
Calculating the cost of a year without land-tilling
0
Since it doesn't change the money supply, how can an “expansionary” fiscal policy alone spur economic growth?
3
Difference between the International Dollar and PPP
0
Present Value Analysis
0
Inflation vs GDP growth as factors driving down the US debt-to-GDP ration post-WW2
1
How were unit labor costs estimated by Gali and Gertler (1999)?
0
How to assign a set of parameters to a macroeconomic model in Matlab?