How did reducing the employment gender gap impact the US economy?

In the United States, women have been replacing men in the workforce, or rather were from sometime prior to 1976 until the mid-90's. (The general upward trend is from the recent recession, sorry, I'm recycling a graph from another presentation).

Presumably, this occurred when a more qualified woman got a job over a male counterpart as women entered the workforce.

Given that, one would expect the economy to grow substantially as overall productivity rose.

Yet US GDP growth did not appear to outpace the world over that period, since not all the world liberalized their gender roles simultaneously. 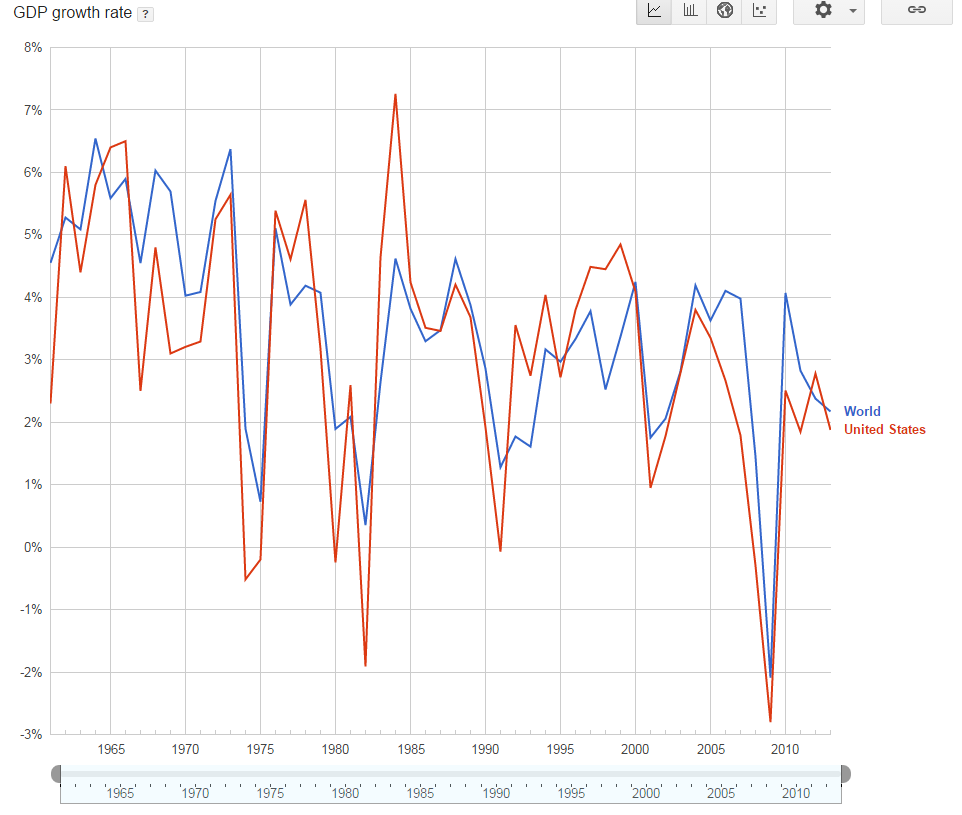 Is there a flaw in the reasoning, or were the effects simply not visible at the scale I've looked because the data was too volatile or confounded by external factors.

I'd be interested in any studies that dealt with this topic and offered potential causal mechanisms for breaking the presumed link between (again, the presumed) increased efficiency, and output growth.

I'm eyeballing that the unemployment rate of man rose by 3% while the rate for woman fall by 13. Clearly not all of those newly working woman replaced man.

You choose a rather long period with incredible changes to the US economy; The one I think responsible for the effect you saw being the shift from manufacturing to service.

The Situation in 1977 can be seen on Page 10 (4 in the original numbering) of the 1977 Census. It shows 44% of all employees working in manufacturing and 39% in service (Retail + "Selected services industries".

Contrast that to the 1997 Economics Census (Page 20 or 14) where "Retail Trade" alone employed more people than manufacturing - and Services almost double compared to manufacturing.

That shift favored woman (and probably was only possible due to more woman choosing not be stay-at-home moms) which explains the diminishing employment gap.

Answer:
From the research that I have done in order to answer this question, I believe that the following premise is flawed:

Presumably, this [women replacing men in the workforce] occurred when a more qualified woman got a job over a male counterpart as women entered the workforce.

My Reasoning:
In the early 1900s, women's rights became an important issue in the Western world. Women began entering the work-force during World War II in order to replace the men who had gone to the fronts. The wages of women, however, were much less than the wages paid to men (in some cases, it was only 60%).
It was not until the 1960s that the women's rights movement, now called "feminism," began to gather momentum, and President Kennedy signed the Equal Pay Act of 1963. This supposedly allowed for wages to be set by the job and not influenced by the sex of the worker. While this law reduced the wage gap, the gap continued to exist and still exists today.

6
How does inflation impact the welfare of the economy?
0
How to distinguish Full-time (FT) employment and Part-time (PT) employment when calculating employment rate?
1
How do the wages affect the employment
0
Why would the economy return to equilibrium at full employment after a supply side shock?
0
How does Infrastructure impact on Aggregate Supply?
2
How will asteroid mining impact the economy?
1
How exactly did Venezuela's economy fail?