I am interested in a system where the state prints new money to cover all its expenses. (There is no direct tax collection.)

I'm interested in anything you might have to say about this system, but to keep things concrete:

(2) Have economists studied this system? Are there any consensus views?

(3) Does it have a googlable name?

I recall Milton Friedman mentioning this system somewhere in his work, but only in passing, with a negative remark along the lines of "it wouldn't be a very good system".

It seems to me that such a system would correspond to a perfectly implemented flat rate tax-on-wealth. A possible downside is that people would invest the money in "something without inflation", but this of course holds true for any system with any positive amount of inflation.

It's called seigniorage. This actually goes on to some degree in every country. I don't think any country has ever relied solely on this to cover all its expenses. (Those that come close usually suffer from hyperinflation.) 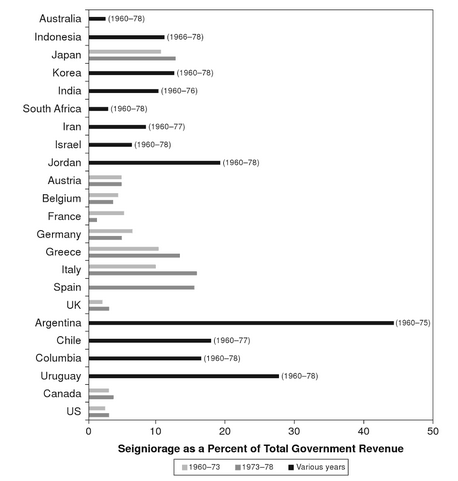 Note that although the printing of money by the government is sometimes dubbed an "inflation tax", this is mostly a metaphorical expression, because it isn't really a tax.

Historically, there are only two incidents able to dodged the ills effect of the inflation, both happen in Japan.

The first inflation nullified by Japanese bureaucrats propaganda on patriotism to encourage people to put money in the bank than spending. (those saving eventually funding Japan militarism expansion).

The second one is nobility in natures. Together with series of policy to protect civil necessity, the high inflation from 50's to end of 60's, effectively destroyed traditional rent seeker: rent control prevent landlord increase rental at wills; payment to the noble families(according to Japan monarchy system) are fixed and become worthless when the inflation goes sky rocket. But once the general public income starts picking up the pace, the inflation start dropping. Because the tax collection in place are able to pay off the government expenses and allows the government dodge the ill effect of actual inflation.

In shorts, inflation is a "process" or tools to achieve some economy objective, it should not be the objective itself. It is all about correct tool apply at the correct time and the correct place.

I am interested in a system where the state prints new money to cover all its expenses. (There is no direct tax collection.)

I'm interested in anything you might have to say about this system, but to keep things concrete:

If one wants to take a very strict definition of "tax", it may be possible that some resource-producing countries have no "tax." Instead, they have revenue from commodity exports. However, such cases are somewhat of a stretch.

(2) Have economists studied this system? Are there any consensus views?

Modern Monetary Theory (MMT) is one school of thought (part of post-Keynesian economics) that examines the details of government funding. The argument is that all government spending is effectively "paid for" by issuing money.

However, MMT theory also argues that "taxes drive money." In order for government-issued money to have non-zero value in exchange, it is necessary to have taxes, which can only be paid using the government-issued currency. If taxes were abolished, the currency would have zero value (or the prices of goods expressed in the currency unit "go to infinity," which is effectively a hyper-inflation.

MMT is popular on the internet; you can easily find a lot of information via a search engine. One academic site is fairly central: http://neweconomicperspectives.org/

Of course, not everyone agrees with MMT. But the online debates would cover the issues that this question discusses.

As for a consensus view, the argument that taxes are needed for the currency to have value is probably close to consensus, although the wording would be different. The Fiscal Theory of the Price Level is a theory that the expectations of future taxation (primary surpluses) is what drives the value of the currency. If only money were issued, interest rates would have to be 0% forever, and that allegedly gives rise to unstable equilibrium (with prices expected to shoot off to infinity). There is lot of related discussion with regards to the "governmental budget constraint" and "Ricardian/non-Ricardian" policies.

Schools of thought that rely on the quantity theory of money would view the rapid creation of money as being a direct cause of hyperinflation.

(3) Does it have a googlable name?

As I noted above, searching for:

should give a lot of material to read.

This is essentially an elaboration of the "taxes drive money" idea from Brian Romanchuk's answer.

If the population of a country do not like their governments currency then they have several options. The could use barter or promissory notes or the currency of another country. If everyone does this then the government's currency becomes valueless, making "taxation by inflation" impossible.

However, if the government says that everyone must pay tax in the government's currency or our police (who are paid in government currency and so have good reason for wanting to maintain its value) will come and lock you up then everyone needs to obtain government money to pay their taxes. They obtain this money by trading goods or services to the police. Thus the money circulates and retains value.

Not the answer you're looking for? Browse other questions tagged inflation taxation government-spending or ask your own question.

4
Has any country attempted to inflation adjust capital gains before taxation?
4
How to determine regressive tax
1
Difference between pigovian tax and sin tax?
0
Can infrastructure costs be covered by taxes on flat sales/rents?
0
Wealth tax and share holdings
1
How much revenue could an 100% land value tax be able to generate for the Indian government?
1
Differentiation in a inflation tax calculation