Has worker productivity decreased since the election of Donald Trump?

Anecdotally, I know that myself and others have felt distracted, depressed and anxious since the election of Donald Trump.

Are there any studies that have objectively sought to measure worker productivity since the election of Donald Trump?

What was their methodology, and what were the results?

If no such study does exist, can you describe any similar studies and what the methodology is?

I think it's too early to identify econometrically an effect of Trump in the economy. Recall that the election was the 8th of November, and his victory came partly as a surprise. He took some time to define his cabinet and got into office the 22nd of January. Thus, any effect of a Trump's "dummy" might only partially be reflected in data for Q4 of 2016, and perhaps not fully in Q1 2017. The release of (worker's productivity) for Q2 2017 is the 9th of July (soon), where we might see more of Trump's effect on the economy and productivity.

The best we can do at the moment is simply look at how the economy has evolved since Trump (see here for a related exercise for Obama).

For example, the favourite measure of labour productivity among economists slowed down in Q4 of 2016 and did not increase in Q1 of 2017:

Similarly, there was an increase in workers productivity in the manufacturing sector in Q4 of 2016, which slowed down considerably in Q1 of 2017: 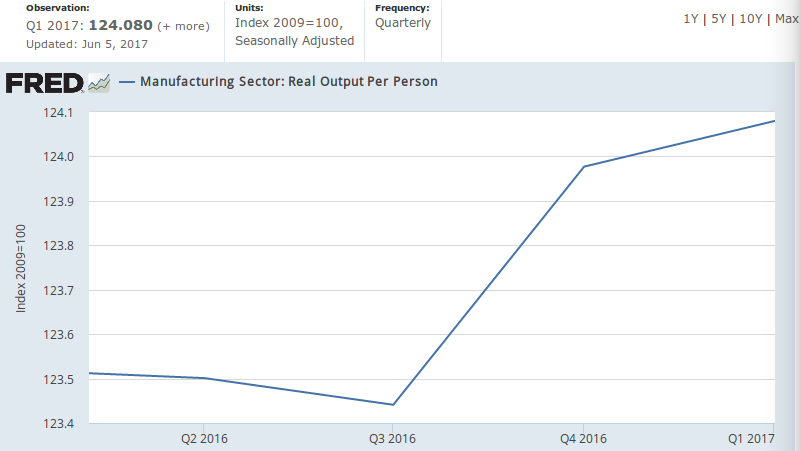 How these developments are related to Trump is not clear though. Some news reports about these data releases make no mention of a Trump effect (e.g. here (Q4 2017), here or here (Q1 2017)).

Another example comes from the stock market. Here is an analysis showing the performance of the stock market under different presidents, after their 100th days in office. I show the main table below: 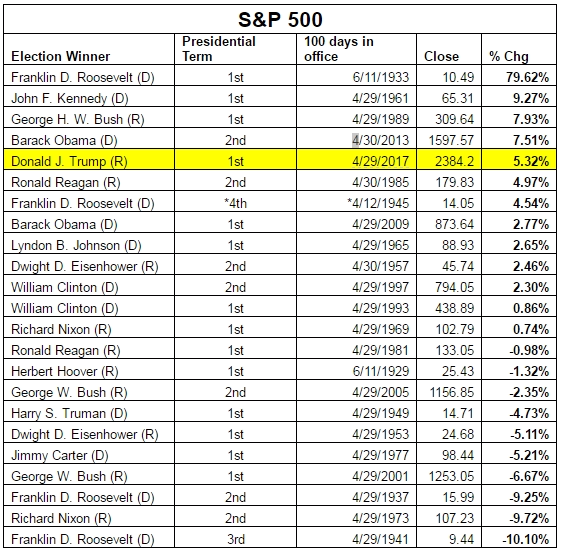 Not the answer you're looking for? Browse other questions tagged reference-request productivity or ask your own question.

6
Has Stack Overflow been economically beneficial to programmer productivity?
4
Present-bias vs future-bias
6
Why has increased productivity over the last 100 years not affected how much people work?
16
Productivity vs real earnings in the US -- what happened ca 1974?
4
Empirical explanation on divergence between productivity and wages since the 70s
5
Can we see the computer age in the productivity statistics?
3
Reference request: Gender wage gap / Minority wage gap
0
The relationship between profit and wages
1
Measuring productivity with the Törnqvist index
0
Literature recommendation