How much does a public sector pay rise actually cost the UK government?

This is something that's in the UK news at the moment. Public sector workers have experienced a 1% annual cap on pay increase since 2013.

Government ministers are appearing on TV saying that they don't have the multiple billions required to fund an increase to bring it in line with the private sector.

Despite the headline figure (let's call it £6 billion), how much does the pay increase actually cost the government? I'm thinking that VAT receipts, income tax receipts and corporation tax receipts (from an increase in spending) would surely all go up?

The Public sector trade union did an analysis of lifting the cap in 2014. The report is here. Unlike the IFS analysis presented above, Unison estimates the net cost of an increase in public pay by 3%, using a microsimulation model. They estimates are summarised in the table below: 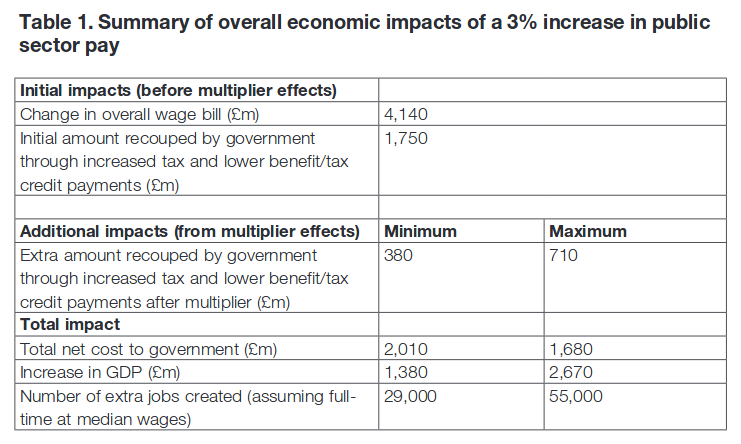 The key here is that a gross increase in the cost by approx. £4 billion reduces to a net increase between £1.7 and £2 billion (or £2.2; see Table 6a). The difference between scenarios depends on the assumption of the fiscal multiplier, which can range between 0.34 (used by the Office of Budget Responsibility), and 1.02 (upper bound used by the IMF). Naturally, the larger the multiplier is the higher the benefit from the wage increase, and the lower the net cost.

The Institute for Fiscal Studies provided an analysis of the 2017 general election Labour and Lib Dem manifiesto, which included a lift to the 1% public pay cap increase. As the report states:

Our analysis of the Labour plan implies that, compared to the current government’s plans, by 2021–22 a Labour government would need to provide departments and local government with an additional £9.2 billion per year to pay for the higher costs of employing public sector workers. Of this, £2.9 billion would be for the NHS. Comparing the Liberal Democrats’ plans to the current Conservative government’s plans, it would necessitate an extra £5.3 billion per year, of which £1.6 billion would be for the NHS.

The table below summarises their conclusions: 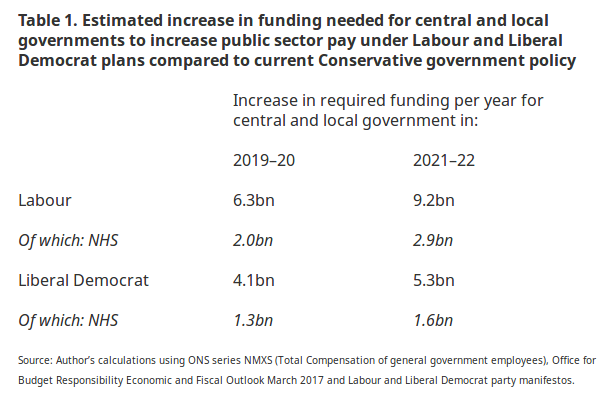 As the report states, any forecast is highly dependent on the state of the economy (uncertainty due to e.g. Brexit):

These Figures are highly sensitive to the forecasts of the economy. For the Liberal Democrats, the cost will be higher if inflation is higher in 2018–19 and 2019–20 than is expected by the OBR currently, or lower if inflation is lower. Under Labour’s policy if private sector earnings growth performs less well over the coming years than is forecast by the OBR (it has consistently underperformed OBR forecasts in recent years), then it would cost less than is implied by Table 1. Conversely, if private sector earnings growth performs better than forecast, and public pay is increased faster too, then the cost to departments and local government of Labour’s policy would be higher too.

Notice that these figures are gross cost estimates. I.e. they do not include indirect costs or benefits associated with it. For example, further costs might arise due to how the spending is financed. Such increase in spending would certainly require (i) more taxation, and/or (ii) more borrowing (cuts also possible, but less likely, due to party manifestos). The former could change incentives to work or invest (affecting growth), whereas the latter means higher borrowing costs, which have to be paid too. Regarding the benefits, if you have some belief in the fiscal multiplier, you could expect that part of that increase might be offset by extra revenues (income, VAT, etc) due to higher GDP (e.g. via consumption) from public workers. If this is a permanent increase, then such change in consumption is likely to be higher (at least according to the permanent income hypothesis).

Not the answer you're looking for? Browse other questions tagged government-debt government government-spending or ask your own question.

5
What's the difference between public debt, government debt and national debt?
1
How does reducing government spending increase the money supply?
4
How do government purchases crowd out the private sector?
0
Does Medicaid or Medicare represent a higher risk to the Federal Government Solvency and Debt going forward?
0
How do the Government, Firms and the Foreign sector pay their debts in this circular flow of income?
1
What is the public spending / government expenditure share of GDP in Europe?
0
What are the 'Public Account Liabilities' of the Government of India?