This is a basic question, but I cannot find the answer to it. In short, equilibria are often conditioned on a specific strategy. E.g., given A's strategy, B updates her beliefs to xyz. My problem is that often an action could be a part of the equilibrium path for many different strategies, so how does B know which strategy A is following?

Below is an example that might clarify the question.

Consider a classic signaling game (2 types, 2 actions) à la Spence. Suppose furthermore that there are two equilibria: one pooling, one separating. In the pooling eq., say, both types of senders send "Low". In the separating, the "Strong" type sends High, the Weak type sends Low.

The part that I struggle with is: how does the receiver know what equilibrium path they are in? For example, say the receiver observes "Low". If we are in "pooling world", then the receiver's posteriors are just going to be her priors. If, however, we are in "separating world", then she can update to p(Weak|Low)=1. But observing "Low" alone does not tell the receiver what strategy the sender is following, so how can she possibly update her beliefs? It seems to me that she would need to have beliefs not only about types, but also about strategies being followed.

Sorry if this is idiotic, but this has puzzled me for a while.

This is a common source of misunderstanding with regards to the concept of equilibrium. The specification of an equilibrium (at least in the standard theory of a one shot games) is agnostic about how the players figured out they are in that equilibrium, and, by definition, assumes players know the ex-ante strategies of their opponents.

We do not need the complications of incomplete information games for this confusion to arise. Think of a simultaneous coordination game: both players playing heads is a NE, but how does player 1 know player 2 is going to play heads, since playing tails could also be a NE? In dynamic and incomplete info games this problem might be exacerbated, but the core issue is the same: equilibria assume the players are best responding to the true (ex-ante) strategy of the other players and therefore that they know which equilibrium is occurring.

How to make sense of this? Well, for starters we could accept it as the way things work, assuming that equilibria arise from some learning/evolutionary process, and once an equilibrium is known, no player will want to deviate. This might make sense in simple coordination games, but is unsatisfying in the example you give. To remedy this, we could make assumptions on which equilibria will occur (i.e., refine the set of equilibria), so that in the surviving equilibria, beliefs are more clearly specified. There are many different ways to go about this, but, a refinement that was developed to assuage your concern in particular is the Intuitive Criterion, which eliminates eq. where (shamelessly copying from wiki) "some type $\theta$ who could benefit from a deviation that is assured of yielding him a payoff above his equilibrium payoff as long as other players do not assign a positive probability to the deviation having been made by any type $\theta'$ for whom this action is equilibrium dominated." Notice, this eliminates the pooling eq. since the high type alone could profit by deviating to $high$, which would signal to the Receiver that the separating equilibrium is in play.

Lastly, the option that is least practical but perhaps most theoretically satisfying is to give up on equilibrium all together and admit that from an epistemic perspective rationalizability is the strictest prediction implied by rationality :)

In signaling games, beliefs as well as strategies constitute an equilibrium. In other words, beliefs are a part of the equilibrium object. By deciding which equilibrium to focus on, you also (partially) determines the beliefs consistent with that equilibrium. The key restriction is that beliefs be derived from Bayes' rule using sender's strategy and the prior.

Consider the following game, where P1 is the sender and the common prior is Type I realizes with probability $p$. 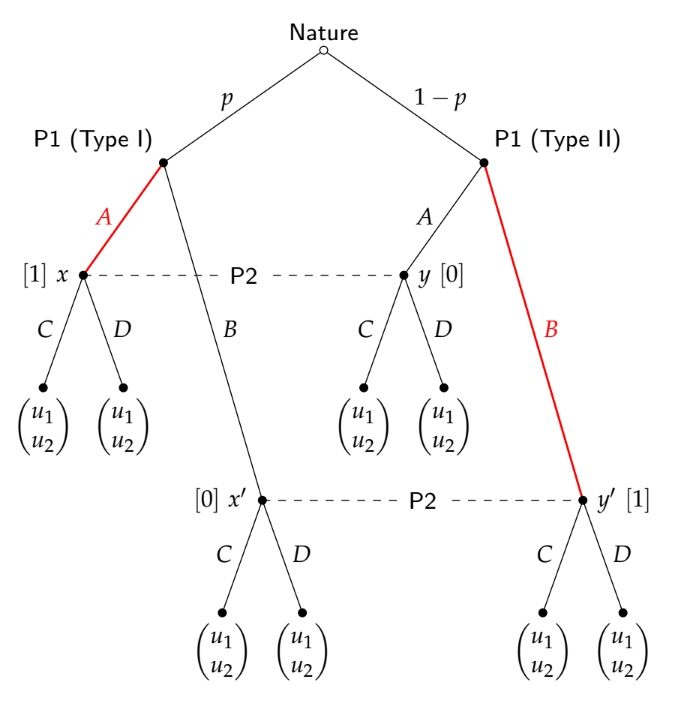 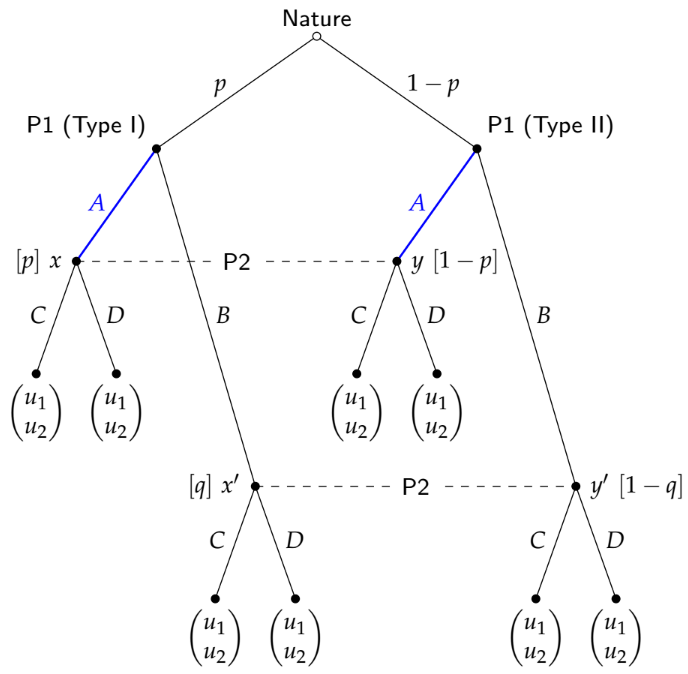 The bottom line is: you cannot talk about an equilibrium separately from the beliefs. By talking about a particular equilibrium, you also implicitly restrict the set of beliefs consistent with the said equilibrium.

Not the answer you're looking for? Browse other questions tagged game-theory signaling or ask your own question.