Why do we use tax brackets?

Majority of countries (if not all) use tax brackets to define how much tax should the earning workforce pay. So we could have something like this.

The breakpoints are what I am going to ask about. It has been proven in other schemes, such as the UK's Stamp Duty Land Tax that separating tax into categories like this leads to clusters on the lower bound of the breakpoints. My understanding is that this is not a desired effect and the distribution on the scale should be more fluid.

I come more from the software engineering side as opposed to the economic side, so I assume that in the past it was easier to calculate tax using this system and that's why it was chosen. Humans would not be able or willing to do complex tax calculations had we used rules that can be charted for example as S curves.

However, I wonder if we could have a better system today? (Assuming the current system is not sufficient.) Are there any proposals or significant movements that are not satisfied with the current tax system?

Note: I am not making assumptions about how the collected money is being spent, or how much is being collected. This is purely about the curves behind the tax brackets and clustering.

I think you've misunderstood how the (UK) income tax brackets work. They work differently to how stamp duty used to work.

Stamp duty brackets used to be absolute rates: so when the purchase price crossed over the bracket threshold by £1, the marginal rate would be huge, as the whole purchase price was taxed in the higher rate. Hence the clustering.

The way tax brackets currently work is a fixed marginal rate that increments at set intervals. Solving the amount of tax to be paid can be done with a pocket calculator and basic algebra. Using a curve implies a constant change to the marginal rate implying every dollar earned will have a slighly different tax rate and you need to use calculus to figure out how much to pay.

At the end of the day, the people running the tax office are not going to care about having a beautiful curve for tax rates as they are dealing with all of us incompetent tax payers paying the wrong amount of taxes. As well, complicated tax calculations hurt small business owners and the self-employed, who can't be expected to be using calculus just to pay their taxes.

Politicians are smart enough to realize just because it's pretty that doesn't mean it's practical. You've got to consider the audience of people actually implementing the rules.

Why not use a smoothly changing incremental rate? "A steady curve"

First, as it has been clarified that the bracket changes are on incremental income then there are no major discontinuities in the average rate even though there may be in the marginal rate. So one might put the question in reverse: why would you have smoothly changing marginal rates?

There is more interest in the simplification and flattening of income tax.

UK taxes on employee income have two components which together comprise the margin rate at which tax is taken. National Insurance was a 'welfare stamp' with an upper income limit, though it has since been used to increase higher rate income tax by 2% without affecting the headline rates that gets most attention

There are some difference in tax in Scotland & Wales, so strictly these numbers apply to England and Northern Ireland.

It is pretty bonkers! 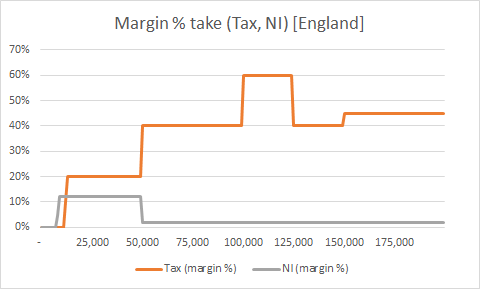 But even with all this, when you look at overall amount taken as a % of income ("the average % rate") this is relatively smooth and curved even given the bonkers changes in margin rates. 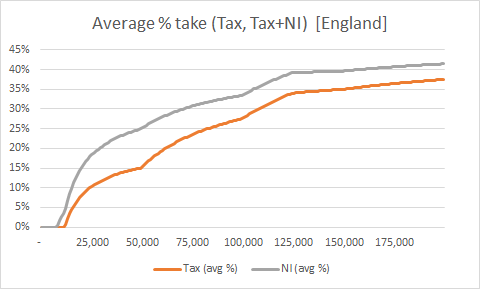 How would you implement algebraic rates

If you are after smoothly changing average % rates as you can see this is entirely possible with a piecemeal set of marginal rates.

Guardian - UK has longest tax code in the world

I have been asking myself this question for a long time.

Indeed using a steady curve (instead of brackets) for linking income to tax rates would be simpler and clearer.

Everybody could easily calculate their tax rates at a given income. Or if he or she is traumatised by maths in school: government could publish look-up tables anyway.

So why don't states do this?

The only explanation I can imagine is that

a) politicians are often maths- and formula-averse, or

b) they are not but they feel that a majority of population is formula-averse and that they would not meet the necesssary level of understanding in the electorate, so it is unattractive for them to propagate such an improved system, or

c) bureaucrats in financial authorities are change-averse and do not suggest that solution to politicians.

All of these are weak reasons. But still I do not see better ones.

2
Can Apple use its off-shore cash to do Apple stock buy-backs tax free?
1
Why is corporation tax regarded as a direct tax?
3
Who really pays transaction taxes like VAT or sales tax?
1
Wasn't Laffer Wrong?
6
Why use marginal rather than average tax rates in incentive analysis?
2
Economics of disparity in wages and in 'financial quality of life'
1
Why tax investment?