What is one dimensional, ordered type?

I am reading papers about moral hazard. What is one dimensional, ordered type $\theta\in\Theta$?

What is one dimensional, not ordered type $\theta\in\Theta$?

Could you please give an example?

Judging from the reference you provide, this refers to whether the set $\Theta$ is ordered or not. For example, natural numbers or the alphabet are ordered sets. In the context of moral hazard problems, examples could be effort, or ability. Since this is a numerical variable, it is an ordered set.

In the paper you mention, the phrase "one dimensional, ordered type..." is not found. However, the paper states that:

... differences among sellers are assumed to be parameterized by a single unobservable characteristic $\theta \in \Theta$. Then the family of utility functions can be written in the alternative form,

If seller $i$ has $\theta_i$ units of the characteristic we may therefore refer to him as being of "type $\theta_i$.

The first bold statement refers to the one dimensionality of the unobserved type, whereas the second refers to it being a numerical variable, which means $\Theta$ is an ordered set.

Conversely, a non-ordered set contains elements which have no intrinsic order. For instance, you can think of a case where agents do not know the city where they are to be located. The set "cities" is unordered because cities do not necessarily hold a particular order in a one-dimension set. You can add a second dimension (e.g. population), where you could order them based on city size.

I would say that having ordered sets facilitates algebraic analysis, since it enables the introduction of monotonic strategies, whereby an important outcome variable is a monotonic function of the agent's type. In effect, this seems to be important in the paper, when the author states that:

A seller of type $\theta_i$ brings to market a product that is valued equally by each of the set of potential buyers, $J$. This valuation, $V_i$, measured in dollars, is an increasing function of $\theta$ and (possibly) also of the intensity of sales-related activity, $y$:

The bold emphasis highlights precisely the monotonicity enabled by the order property of $\Theta$. Another example is given in Athey (2001): 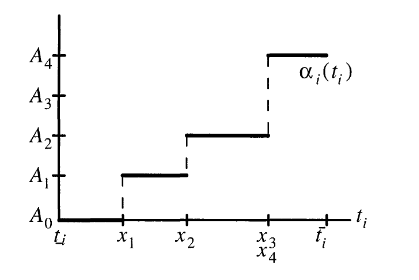 In response to the second reference you give (here), in the phrase

We now show that Riley equilibria may not exist when types are not ordered.

the "ordered" adjective refers to the second interpretation given above (i.e. of monotonicity). First, they assume that

Consumers are uniformly distributed in the unit interval, $\theta in [0,1]$

which is an ordered set. However, because both the utility function and the cost function are quadratic, it results that

... the types in the extreme points have the strongest preference for one of the contracts and are the most costly to serve.

which means that the utility and cost functions are not monotonic over $\theta$.

Not the answer you're looking for? Browse other questions tagged microeconomics utility supply-and-demand choice-theory asymmetric-information or ask your own question.

4
How does one calculate compensating variation for multiple price change?
4
What is the classic paper that derives borrowing constraints from asymmetric information?
2
difference between screening game and moral hazard game
1
My Challenge in Econ 101 explanation of Marginal Benefit = Marginal Cost
5
Multidimensional screening and convexity of the surplus/rent function
3
Moral hazard vs hidden information.
3
Signalling in a moral hazard contract with informed principals (that know their own type before contracting)