What is the standard error on quarterly GDP figure? [closed]

The government and media seem to judge whether it is in a good economy right now based on its quarterly GDP figure.

However, I wonder how its figure is trustworthy. Even if the quarterly GDP is +1.2%, the actual figure should be +0.3 to +1.9% in 95% CI. Or -0.8% to 3.0%. Or something like that. But the point is that it should never be at the exact point, especially given that the figure is frequently updated later.

So how much standard error is it considered to include?

I've never seen standard errors reported alongside official figures (e.g. here for US, here for UK). You would expect they could calculate/report them, since GDP is computed from samples (so randomness is explicitly involved in the design). It is more common to see standard errors reported for GDP forecasts though. For example, check Figure 2.1 of the latest Bank of England Inflation report (data here).

Regarding GDP, what is very common however is the publication of revised figures. That is something both the US and UK include in their quarterly reports (see links above), and also common in many (in not all) countries. Comparing actual and revised figures gives you an idea of the uncertainty involved on preliminary estimates. For example, in the release notes for quarterly GDP of the US economy (see link above), towards the end there is a section called "Updates to GDP", which contains:

The table below shows the average revisions to the quarterly percent changes in real GDP between different estimate vintages, without regard to sign.

The Bank of England also provides its estimates of the past uncertainty (what they call "backcast", in opposition to "forecast"). This is available in the last sheet of this dataset.

Another interesting example comes from the Euro Area. Eurostat produces quarterly "Preliminary GDP flash estimates" for the Euro Area for selection of periods: 30, 45, and 60 days after the end of the quarter. As the page states, there is "a trade-off between timeliness and accuracy". An example of subsequent revisions are: 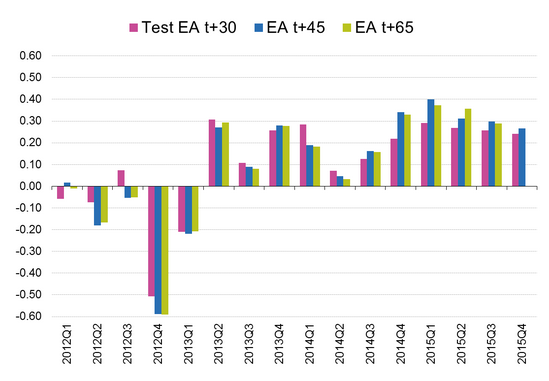 Not the answer you're looking for? Browse other questions tagged gdp statistics or ask your own question.

4
How to measure GDP in practice?

12
What is the Gross Domestic Product (GDP)?
1
If I employ someone to destroy a building, what is the net GDP impact?
3
What is the Credit-to-GDP gap exactly?
1
In what country outside of the EU is the public sector the highest percentage of GDP?
0
Quarterly GDP growth terminology: YoY vs QoQ
0
How to calculate Real GDP from quarterly change
0
what is potencial GDP?
0
How does FRED Quarterly Real Gross Domestic Product and USA GDP growth rate match?