Did JP Morgan mitigate the effects of the Great Depression?

Not really. While it's possible that the Morgan intervention softened the initial stock market decline, the vast majority of the ultimate collapse in securities prices, commodity prices, industrial production, and the banking sector took place after the purchases had been liquidated.

First some history: the bankers' pool intended to lift the stock market was assembled at the J.P. Morgan & Co. offices on October 24, 1929, "Black Thursday", the initial day of market chaos. They pooled their resources and directed broker Richard Whitney to place high bids on blue chip stocks at the NYSE to lift the confidence of the markets. This stemmed the crash on Thursday and led to a rally that continued the next two days. Indeed, the following Sunday's New York Times lauded the "carefully arranged" plan to boost the market, and mentioned that the inclusion of the First National Bank in the buyers' pool the next day confirmed to Wall Street that "the danger of panic had been averted". Some history of these events is provided in the Wikipedia article on the crash.

Alas, the Monday and Tuesday immediately following this confident appraisal - October 28 and 29, 1929 - are known as Black Monday and Tuesday, respectively. They experienced the second and fourth largest daily percentage DJIA declines in history, combining for easily the largest two-day percentage decline in history. Most newspapers at the time described the bankers' pool as waiting to intervene until late Tuesday, when they cut margin requirements and placed buying orders (see AP article). An AP article describing the crash on Monday opened with "powerful financial interests stepped aside today and let the stock market drop...". Finally, on Wednesday the bankers' pool entered with strong buying orders, leading to the third highest daily percentage DJIA increase in history. The next day the pool apparently stepped away from the markets once more.

It kept going like this for a little while, with some more volatility in markets over the next few weeks but eventual stabilization and partial recovery. Finally, the banking group quietly wrapped up its activities in February 1930, with press accounts mentioning that it "come out about even".

Given all this, it's possible that the bankers' pool offered some initial stabilization of the markets. (Although even that's not clear: from press accounts, it seems just as likely that volatility was increased by the erratic day-to-day decisions of the pool.) But again, any significant effect seems unlikely, because the vast majority of the carnage in the Great Depression took place after the pool had been liquidated in February 1930. To convey some sense of this, the following graph shows (in log points) the fall of the DJIA, industrial production index, and wholesale price index in the US starting in September 1929. As you can see, the initial declines in late 1929 and early 1930 - although substantial - are far smaller than the eventual ones. This is in line with the modern consensus view on the Great Depression, which emphasizes the role of the gold standard and its propagation of adverse monetary and banking shocks, rather than the initial market crash itself. 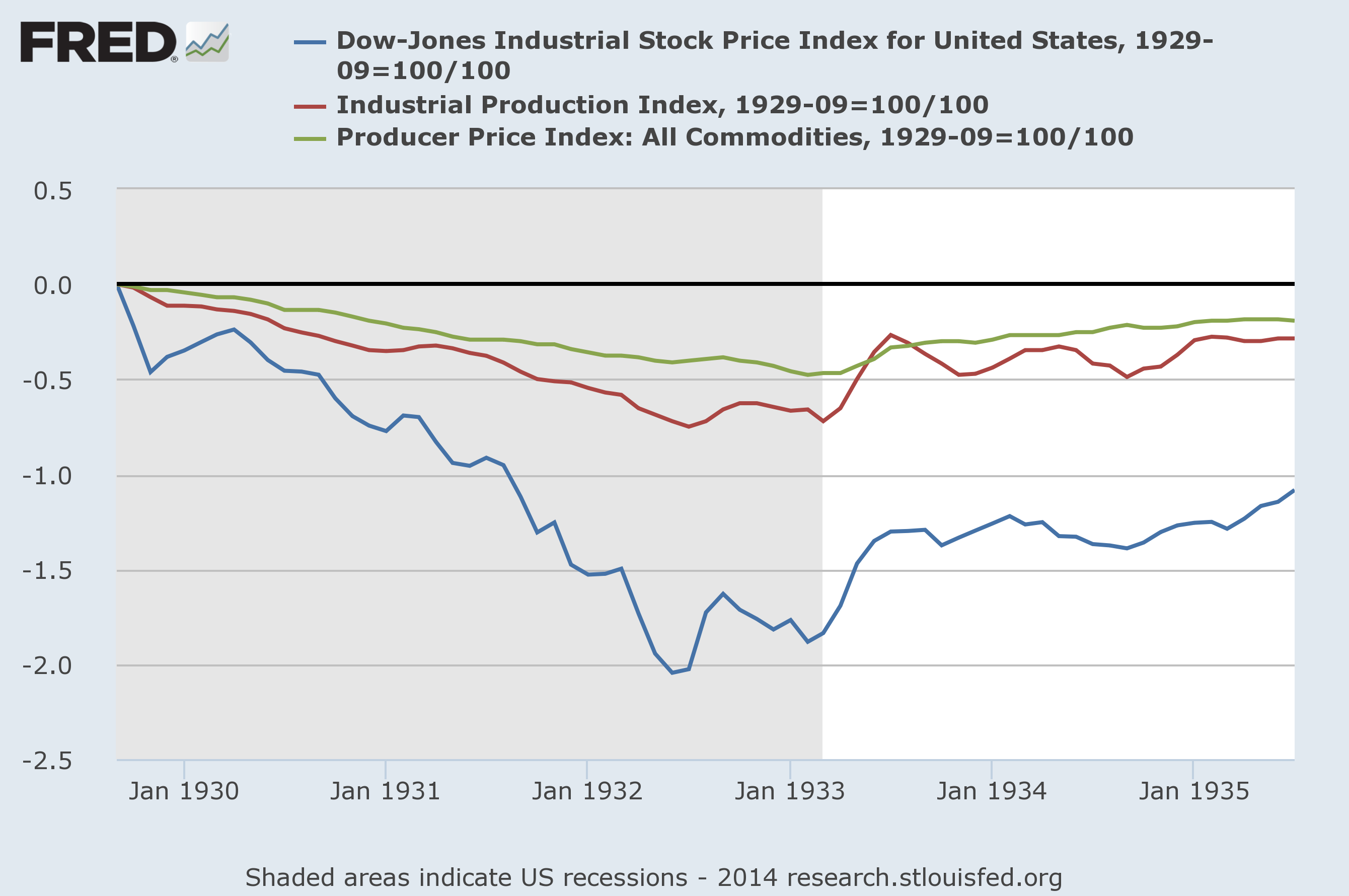 This is all an interesting contrast with the more famous and successful case of intervention, performed in the Panic of 1907 by J.P. Morgan himself. (The original J.P. Morgan was long dead by 1929, though his eponymous son and firm lived on.) In 1907, Morgan engineered a wide variety of rescue measures, making large deposits in struggling banks and large call loans to brokers. These measures are thought to have helped end the panic.

The key difference, I think, is that the 1907 panic was a fairly conventional acute crisis in the banks and money markets: recent nominal growth and seasonal demand for currency meant that interest rates were already high, and then a run on banks and trust companies led to more hoarding of currency and extremely high interest rates. Extremely expensive margin borrowing led to a collapse in securities prices, which endangered the banks further (they were more exposed to stocks, through various channels, than they are now), leading to more run pressure, and so on. In this environment, where banks and firms were sound - and money markets would loosen - if only the panic would stop, it was possible for a few decisive interventions to swing momentum in the other direction.

The Depression was much different. Thanks to the Federal Reserve, seasonal fluctuations in currency demand and (to an extent) panicked currency hoarding did not lead to a spike in money market rates, which actually fell drastically in late 1929 and 1930 rather than spiking as they did in 1907. Also unlike 1907, the banking crisis did not coincide with the initial stock market collapse - instead, it only started with the Bank of United States failure in December 1930, and in the initial stages was arguably due to fundamental insolvency rather than illiquidity. (Since both nominal real estate prices and food prices collapsed, mortgage default rates - residential, commercial, and farm - were all extremely high.)

Not the answer you're looking for? Browse other questions tagged stock-market or ask your own question.

9
Why do falling oil prices take stocks with it?
10
Is belief in future dividends the only long term value of stock?
3
Why does the stock market tend to grow over time
0
What mechanisms are at work when the market falls dramatically one day and then rises just as dramatically the next?
2
By buying stocks, am I as an individual measurably affecting the economy?
0
How does the stock market correlate with the economy?
2
Why is it relevant for a company to use dividends to incentivize shareholders to maintain ownership of the company's stocks?
1
Efficient market hypothesis and different performances between countries