What is the economical advantage coming from the ability to speak English?

I'm very much interested in the difference between anglophonic and non-anglophonic countries stemming just from the language skills. I'll be grateful for any references regarding the topic.

What is the approximate annual economical gain of a country stemming purely from investments in English language classes?

I think this new paper might be of interest to you.

The authors estimate the earnings advantage of workers that speak a second language, differentiating between native-born and foreign-born speakers. They evaluate this for 15 European countries, between 1994 and 2001. Their results are:

The authors also perform a calculation of the annual wage loss from low skill foreign-workers not speaking the local language (as wages belong to GDP, this could partly be seen as a GDP loss, but it's not a very decent general equilibrium exercise in my opinion). The results below: 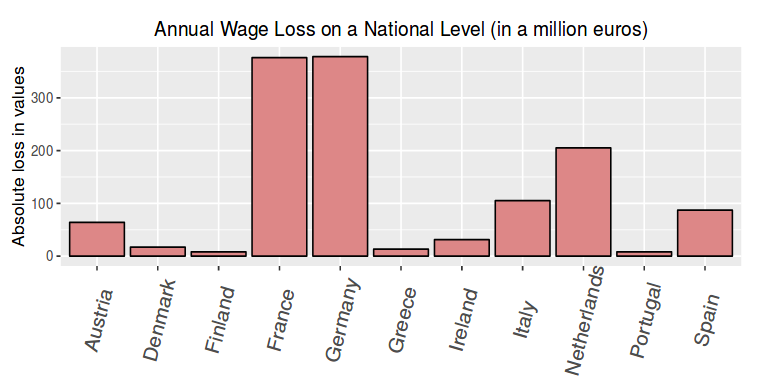 Not only the article itself but the references of the article might be of interest to you. For example:

"Ginsburgh and Prieto-Rodriguez (2011) found that for native workers, English skills are well rewarded in Northern Europe, but much less rewarded in Southern Europe (for example, less than French and German in Italy, etc.)

One of the best ways to study the benefit of speaking English, at least within an English speaking country, is by looking at the wage discrimination literature. Some, but not all, of wage discrimination turns out can be explained away by the ability to speak English. These studies are good to look at because of the controls for other factors. For example, it looks like the ability to speak English was a factor in this study, looking at before and after the impact of the IRCA in the US. The references I give of course are not generalizable to the whole world, because of their focus on the US. So I suggest looking more into the wage literature yourself.

Not the answer you're looking for? Browse other questions tagged reference-request education-economics demographics or ask your own question.

4
What is the classic paper that derives borrowing constraints from asymmetric information?
3
Correlation and Causality: Data comparison of educational spending and GDP growth
3
What factors allow manufacturing to succeed in a developed country?
80
What are some results in Economics that are both a consensus and far from common sense?
1
Does it make economic sense for only some universities in a certain area to pay their sports scholars?
2
What is the proper term for "contraction economics?"
0
Money transfers from A to B - in what proportions