Why do markets that are dominated by a single seller have a tendency to maximize profits at lower levels of output than their competitive counterpart? Why is the competitive market equilibrium price lower than the monopolist price?

The monopolist will restrict output to be able to charge a higher price.

It is true that if the monopolist reduced the price, it could sell more units, but the benefit of selling more units is more than offset by the fact that the monopolist would have to charge a lower price on all units that were previously sold at a higher price. 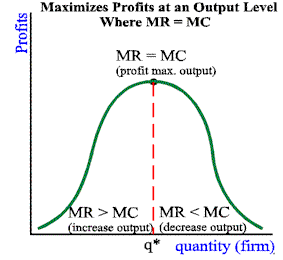 This is why a monopoly is undesirable from the consumer's perspective. Look at the chart above to the right of Point B. There are people (represented by the D curve) who are willing to pay a higher price for an extra unit of output than the marginal cost. Still, the monopolist will not produce that extra unit.

Not the answer you're looking for? Browse other questions tagged competition monopolistic-competition or ask your own question.