Should I stay or should I quit?

Is there an economic theory of quitting an activity? A theory that weighs the investment costs put into something and the opportunity costs of pursuing it.

I am aware of Fershtman and Gneezy Quitting in Tournaments paper that investigates the decision of quitting in the middle of a race or of a tournament. But, I am looking for a more general model of quitting something such as playing an instrument, a sport or even a job. Dropping-out from (grad)-school may obey the same investment-opportunity cost trade-off.

Update: I am looking for some explicit references modeling the exiting or quitting process, even if it concerns some decisions in particular without any generalization.

Edit: Here is why I picked @Ubiquitous' answer.

A relevant literature seems to be that on optimal stopping problems. There is a fairly technical Wikipedia article here and here's a book chapter.

In economics, such models have been used to think about how sellers learn about selling opportunities, investment in R&D, and optimal labor search strategies.

Check out sunk cost. Although this might seem completely counterintuitive, the investment you have made should be irrelevant to your decision to stay or quit, if this investment has already been made and cannot be recovered.

The above reference mentions that in the real-world, people often do not behave in this way. According to sunk cost theory, this is irrational, but this is only one theory.

This handbook provides a broad overview of different modelling approaches to choice theory. Here, I give just one example: discrete choice modelling.

Section 2 of this paper offers an example of a dynamic discrete choice model about educational choices. The decision tree is: 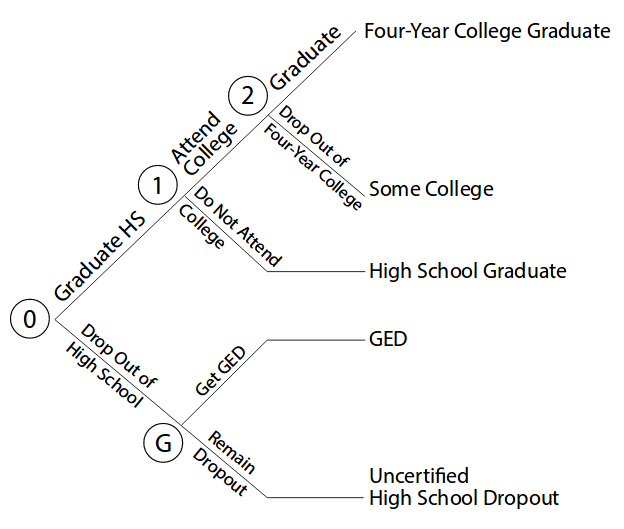 Individuals compare the return of each option, based on their ability and other observable variables.

The discrete choice literature is massive, and includes anything from modelling labour participation (e.g. here or here) to marriage/divorce (e.g. here) to corruption (e.g. here). See the handbook above for more references.

I'm reminded of the law of diminishing returns. https://en.wikipedia.org/wiki/Diminishing_returns The idea is the more you put into production, the less you get out of it. I originally stumbled upon this theory while looking for a mathematical model to model the increased demand for addictive substances, but noted the harmonic series https://en.wikipedia.org/wiki/Harmonic_series_(mathematics) also modeled it, where the second chocolate bar, cigarette, or dose of heroin is only half as good as the first, the third even less, the fourth, etc.

But more salient to what you are looking for, investment into graduate school, in terms of time and money, naturally comes with greater cost, compounded by that diminished return on investment lost by decreased life time earnings in terms of raw years. This could be applied to the "worth of skill" in terms of enjoyment of a highly skilled musical instrument player vs. a skilled musical instrument player, as the number of pieces of music and number of people you can impress first opens very wide, then the limitations become more precise, and the scarcity of musical challenges increases so that a finer and finer list of musical rivals and musical challenges exists. With respect to both a musician and a graduate student, or a marathon runner, in addition to losing the time invested, there's also competition.

Rising in a given devotion forces you into the category of competitive X, such as competitive gambler, competitive skier, or competing against other graduates for the same job. This manifests either as literal reduction of wages, being over qualified or having to compete with a dozen other Ph.D students or a hundred scientists seeking the same grant money. That may be counter intuitive at first, but because the demand for extreme specialization decreases with the increased level of specialization, the supply of rewards for that increased specialization also decreases. With gambling or cheating gamblers, the risk continues to increase and the skill of rivals increases to to financially dangerous levels, as notoriety results in an endless sequence of people actively trying to bankrupt or arrest the gambler. Bank robbery theory is the same way, as criminals often talk about "just one more job", assessing their risk vs. rewards and concluding (usually after arrest) that they should have quit while they were ahead.

Opportunity costs are extreme for some of these models too, as a skilled musician, for example, may impress at 3000-5000 hours of practice, but need 7000-10,000 hours of practice for the average person to appreciate any difference, and 20,000 hours of practice for a subtle improvement beyond that. With a marathon runner, the more you practice, the older you get, and the closer to "peak" you reach, and the more frequent the opportunities for injury, such as the recent Usain Bolt run. Boxing has a similar diminishing returns effect as injuries compound and performance decreases - that was a central theme of Rocky. Football Salaries are exceptionally high with a similar peak and injury calculated into the risk assessment.

Diminishing returns are most poignant though with the college graduate. You are assumed to have X number of years working, and every year in school is a year where you not only are not earning optimal wages, you are also building debt that will compound. Since work experience also increases wages with time, and since student loans have interest rates, there is a point in which a person's life time earnings actually start to drop lower. At one school I was attending, the tuition total was around $50,000/year, and to complete everything through graduate school was going to total half a million dollars and take a total of 10 years. As starting age was a constant and the growth of returns depended on the time from graduation to the time of retirement minus the growth of loans, the model for staying didn't pan out, and quitting was more fiscally sound.

Seeing Ubiquitous's answer, I want to offer a concrete model I learned originally from an Exercise in Jianjun Miao's "Economic Dynamics in Discrete Time", which looked at McCall's (1970) job search model. It asked to describe the model as an optimal stopping problem.

Consider an unemployed worker searching for a job, where each period he is unemployed, the worker draws one wage offer from a cumulative distribution function $F(w)$, where $F(0) = 0, F(B < \infty) = 1$. The worker may then reject the offer and receive compensation $C \geq 0$ or accept the wage $w$, which for now we will assume is received forever (no firing or quitting yet). You cannot accept past offers. The worker is risk neutral., so $\mathbb{E_0} \sum^\infty_{t=0} \beta^t y_t$, where $y_t = w$ if you accepted and $c$ if no offer has been accepted yet.

You can then express the question of when to accept what wage as a dynamic programming problem:

denote the integral part as $Q$, the value function for an unemployed person receiving $w$ as an offer. So then there is some reservation wage where you accept if you get offered the wage or above.

Now when you take this original model, what happens if we allow for quitting? No worker will want to quit since the solution is time consistent. There is no reason to quit the job if you found it optimal to accept a job in a previous period. So the model as is can't account for quitting.

Some ways you can tweak the model though to change the optimal reservation wage over time is to change $C$ to be time varying. Maybe if you have more security over other periods, you might quit to look for a better job that will take you. You could also change $F(w)$ to be time varying. Maybe over time the wages available to someone of your skills rise. In Joanovic's matching model, "tenure" makes your wages increase over time, so that could affect the decision to quit. Maybe your agent isn't risk neutral and their risk preferences change over time.

McCall's model is a nice place to start if you want to tweak with different variables to try and model different reasons for why workers quit, and you can imagine many different extensions have built on it in the literature.

Not the answer you're looking for? Browse other questions tagged microeconomics reference-request behavioral-economics or ask your own question.

4
What graph theory textbook should I use?
1
Have any economists ever argued that the notion of opportunity cost should be done away with?
1
Because Sunk Costs can encode information, should Sunk Costs really be ignored?
7
Why should the statistical value of life exist?
0
Where/What should I search to find the big companies annual paid salary information?
3
Basic question about why supply/demand should move to the equilibrium price?
3
Should the "value function" be "utility function" in prospect theory?
3
Why utility should be bounded (or unbounded)?