Here is a problem in evolutionary game theory: (So the term I am using should be familiar for people in this field)

The game is called 'Clever Mutants' which is a symmetric two-player game: 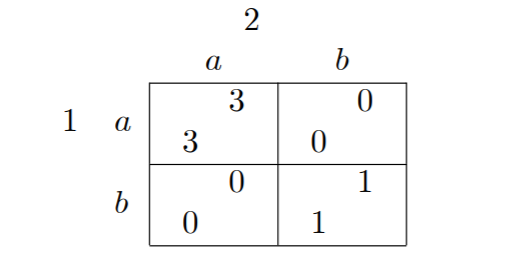 Now, suppose that mutants have a 'secret handshake'. That is, suppose that mutants can recognize other mutants and play different pure strategies against normal and mutant opponents. For example, a mutant could play $b$ against another mutant but play $a$ against a non-mutant. Argue informally there can no longer be an $ESS$ (Evolutionary Stable Strategy) in which only $b$ is played.

I don't know how to argue for that statement, even informally. Can someone help me, please? Thanks so much.

The "secret handshake" idea was first formalized in economics by Robson (1990).

Suppose initially the equilibrium is $(b,b)$. Since the normal population cannot recognize the mutants, they'd always play $b$.

Not the answer you're looking for? Browse other questions tagged game-theory or ask your own question.