What makes statistics economical reports so varied and different?

Search for Iran's GDP in Google, and what you will see is an image representing GDP of Iran, compared to other neighbor countries. It gives us the value of 393.4 billion USD (2015).

Now in that page simply open some results. From Wikipedia, from World Economics, and other sources. You see values from 300 to 1.3 trillion Dollars.

Values are not coherent with each other. As an engineer who is not an economist but understands figures and diagrams, I think these values are so varied that they can not be used in researches as reliable information.

I'm working on a proposal, and I need information that can be trusted. What makes such a bold and universally known economical value so varied across data sources?

Regarding the general question in the title, the reasons why "the same" variable vary across sources depends very much on the particular variable you are talking about. Personally, one of my first shocks when I started working after my undergraduate was the high number of ways the same conceptual variable studied theoretically (e.g. inflation) could be measured in practice. These alternative definitions might refer to slightly different phenomena, or might reflect different set of assumptions by those computing the statistics. Depending on your ontological position when it comes to economic concepts (e.g. is there such a thing as "inflation" out there?), you can argue that some assumptions are better than others. But this does not deny the fact that there are potentially many ways to measure the same variable, and different institutions/individual might prefer one over the other.

Focusing in the case of GDP for Iran in particular, there is the "original" GDP (as coming from official or primary sources) in local currency (notice there are several definitions of GDP too, and in the case of Iran, one with and without oil production). For international comparison purposes, this metric needs to be transformed into e.g. current US\$ or PPP US\$, process which involves some assumptions (e.g. which exchange rate to use?). Again, different institutions might use different metrics and prefer different assumptions. As said below, for data coming from countries using the Islamic calendar, there are further complications when translating to the Gregorian calendar.

Let us dig deeper in the case of Iran's GDP. First, you need to start with the official data (or primary source), available in the website of the Statistical Center of Iran. If you select the file for GDP at current prices (this file), you get the quarterly data for GDP in current Iranian currency. Notice however, that this data corresponds to the Islamic year, which is different from the Gregorian calendar used in most of the world (and used in the websites you mention). The former starts around the 21st of March of the latter. This is not exactly the end of the first quarter of the Gregorian calendar. Since quarterly data is the minimum frequency of the Iranian GDP, there is no exact way to convert quarterly Islamic-based GDP into annual Gregorian-based GDP. This tells you immediately that the translation exercise is by definition an approximation.

One reasonable approximation is to use the last quarter of an Iranian year and the first three quarters of the next Iranian year to produce a metric of the Gregorian-based year GDP. For 2015, this is:

To translate this into $USD, which is the metric of the World Bank data, you would need to assume something about the exchange rate. Do you use the average over the quarter? Over the year?

For example, the same official statistics website above offer a measure of GDP in USD for the Gregorian calendar (see here): 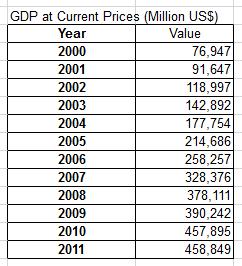 Unfortunately, they do not mention which exchange rate conversion was used.

Meanwhile, the World Bank offers a slightly different one: 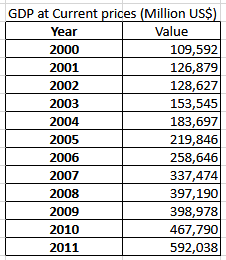 The notes for the latter states:

Did they use a different conversion rate? It's very likely.

Regarding the IMF data, which is reported in the Wikipedia article (particularly in the graph here), this is measured in PPP terms (and the data is highly consistent with World Bank data of GDP in PPP; see here). PPP adjusts GDP figures not only by the exchange rate but also by a measure of the relative cost of living of Iran with respect to the US. This inflates the GDP of Iran (see PPP rates here).

There are plenty of questions in this site about PPP. For example, see here and here.

Not the answer you're looking for? Browse other questions tagged gdp economic-measurement or ask your own question.

4
What is the relationship between inflation and imports/exports?
2
What is the difference between aggregate supply and GDP?
0
Who gathers the production/use data that makes up GDP? And how?
1
Historical GDP of world economies back to 1945: What are the most complete and reliable data sets?
0
What is low unemployment and low gdp growth symptomatic of?
1
What does it mean when we talk about “same basket” exactly for both GDP and CPI?
1
What does annualised GDP shrinkage of 75% and growth of 54.6% mean?