I have been reading about various explanations for the British industrial revolution. A strand of research lead by Allen (2009) tries to provide an incentives based explanation whereby high wage and cheap energy (coal-based) economy of Britain induced labour-saving and capital-deepening technical change. That's, low cost of capital relative to high wages encouraged innovative activities which lead to the substitution of expensive labour with machines i.e. mechanisation of manufacture, textiles, agriculture etc. and this transformation sustained the productivity growth. 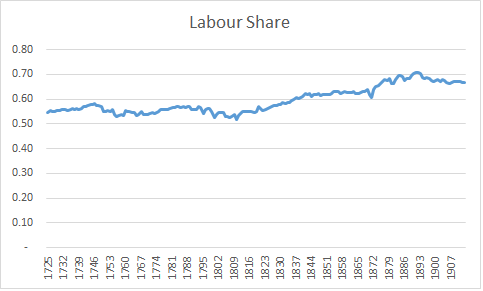 The data does not show any support to Allen's hypothesis, which, if true, I would expect the aggregate wage bill to go down in the 19th century due to labour saving and the share of capital to go up due to capital deepening.

Any thoughts or suggestions as to why the wage bill increased despite the efforts to save labour?

According to Allen (2001), real wages expanded throughout the 19th century in the UK. You seem to imply that they did not. The graph below shows that the UK (London) had higher wages+cost of living than the rest of Europe (except the Netherlands) for several centuries, whereas the rising productivity in the 19th century (because of industrialisation) enabled the possibility of rising wages (see more graphs and tables in the paper). 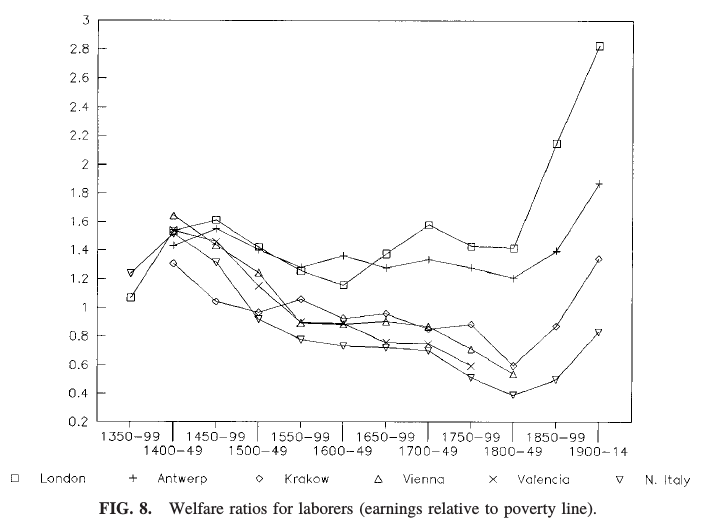 The high real wages in the northern Europe were the result of high nominal wages. These, in turn, reflected a growing productivity advantage that these economies enjoyed during the early modern period. [...] The advantage of northern Europe, therefore, did not lie in cheap labor but rather in high productivity: Exporters in northern Europe could successfully compete against those in the south and pay a higher wage only because their productivity was higher. By the same argument, the eighteenth century rise in English wages above those prevailing in the Low Countries or, indeed, anywhere else on the continent, attests to rising productivity in British manufacturing (cf. Temin, 1997; Berg and Hudson, 1992). The English labor market was so inflated in the late eighteenth century that even the winter wage of men in agriculture exceeded the wage of craftsmen in many parts of Europe. This premium became even greater during the industrial revolution. English construction wages leaped up again in the first half of the nineteenth century, and for this period we know that the wage advance was general. The only way that Britain could pay the highest wages in Europe and dominate export markets as it did was to have the most productive manufacturing sector. Wage history indicates the mid-nineteenth century preeminence was built up over several centuries.

A recent piece by the Bank of England presents a long series of data on different variables, including labour productivity and wage growth. The graph (below) gives further support to Allen's analysis. 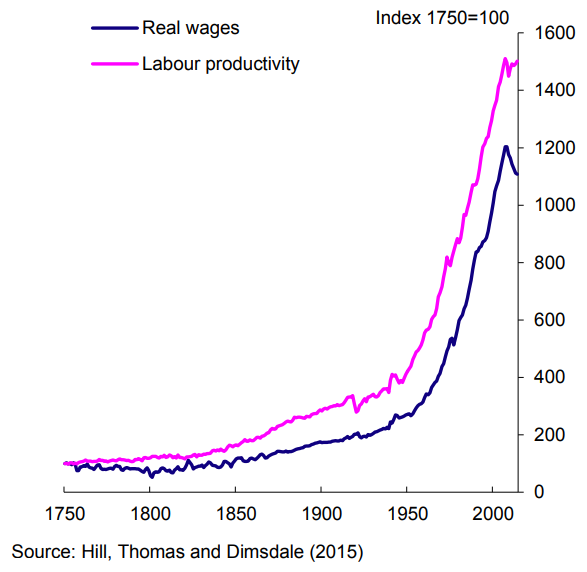 Thus, even in a period of high capital deepening, if real wages (and employment) are rising because of Hicks-Neutral technical change (on top of labour-saving technical change) a rise in the labour share over that period is possible. This can also be seen mathematically.

In a competitive market, the real wage is:

Adding capital to the right-hand side produces:

Capital deepening means $\frac{L}{K}$ falls. In a world with a mild degree of Hicks-neutral technical change (growth in $A$, as you would expect in the industrial revolution and Allen argues), it is reasonable to expect $\frac{K}{Y}$ is falling. Therefore, the term inside the parenthesis is falling. In the case of $\rho<0$, i.e. relatively low substitution between capital and labour (as is the empirical regularity, at least in recent decades; maybe different around the industrial revolution?), such biased plus unbiased technical change leads to an increase in the labour share.

Notice that in the case of $\rho=0$, the CES degenerates to the Cobb-Douglas function, in which case the labour share depends only on $(1-\alpha)$ and not on the capital-labour ratio.

Finally, the above is a highly ad-hoc, not general equilibrium analysis. I just wanted to make the point that the equations allow for labour-saving technical change to expand the labour share.

Not the answer you're looking for? Browse other questions tagged macroeconomics economic-growth directed-technical-change economic-history or ask your own question.