How does the self-corecting mechanism put the economy back to long run equilibrium following a negative shock on the stick-wage SRAS?

According to some lecture notes, apparently it is possible for the economy to return to long run equilibrium if via the self-correcting mechanism if there is a temporary shock to the stick wage (horizontal) SRAS. I believe the situation can be graphed as below (SRAS shifting to SRAS1).

The problem is I don't see an explanation as to how it will return to long run equilibrium ($Y_f$), other than to let labour markets adjust itself over long periods of time?? 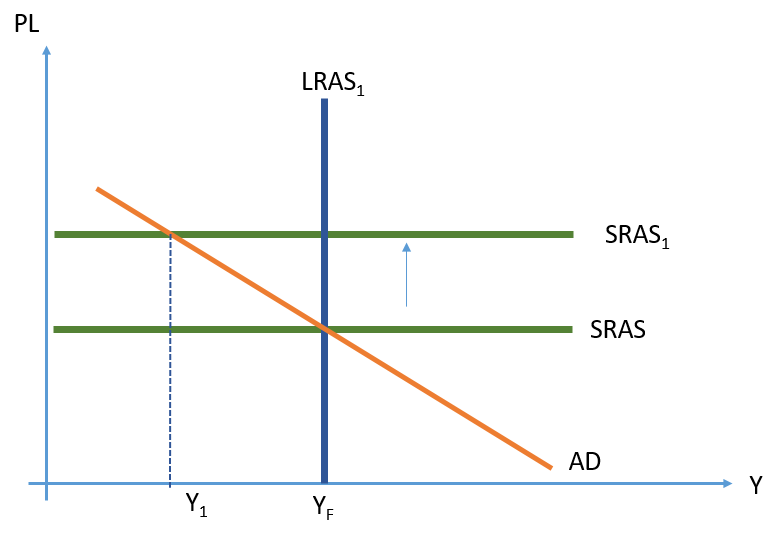 The SRAS wage price being bumped up temporarily means that employers are forced to pay more for labour. From the graph, you can see aggregate demand is much lower at the higher wage price (SRAS1) however the stickiness of wages & employment means that employers have been forced to pay more in wages but cannot immediately adjust the 'supply' by firing employees. Likewise workers will not likely be willing to accept pay cuts, so in the short run the market will be pushed off equilibrium. However, given a little more time, the firms will find ways to let go of employees, bringing the market towards point Y1. This is 'automatic' in the sense that workers are expecting wages of SRAS1 and firms only want to pay for Y1 amount of labour. Once the employees have been laid off to reach Y1, there will be unemployed workers who are willing to work for less (since otherwise they get nothing and we know the position of the LRAS of labour implies a larger available work force than point Y1) and their negociation with firms will push the market back to equilibrium at the lower wage price.

To give a real life example of this, (I know it's micro and this is a macro effect but it helps to build an intuitive sense of how this works) I know of a factory that had a strong union that pushed continuosly for wage increases despite the factory being the least efficient and cost-effective in the firm. So when they threatened to strike, the firm gave in to their wage demands however the firm also invested to build capacity in the other more efficient factories. Doing so took about 2 years.

Finally, once the firm was sure it could handle losing the output from the 'bad' factory, it gave an ultimatum, the workers would have to be more efficient at a lower wage or it would shut the factory down. The workers refused, and the factory closed. Over the next year, the workers realized that nobody was hiring for the wages they wanted and after a little over 12 months most of the workers were hired back at the lower wages the firm wanted in the beginning and the factory re-started. From start to finish it took 3 years for the wage to 'equilibrate' at this firm.

Not the answer you're looking for? Browse other questions tagged macroeconomics long-run or ask your own question.

0
Why would the economy return to equilibrium at full employment after a supply side shock?
0
Why are the concepts of short-run and long-run equilibrium exclusive to aggregate supply and demand and macroeconomics?
1
How saving and investment influence growth in the long run?
2
How does the money supply grow in the long term?
1
How does the economy of a city work?
1
Is it possible that the minimum point of a short run cost curve does not touch the long run cost curve?
0
How will economy find long-term equilibrium in AD-AS model in case of a negative supply shock?
0
What is the long run equilibrium in layman's terms?