What does it mean when the natural rate of unemployment is greater than the actual rate?

According to this graph: 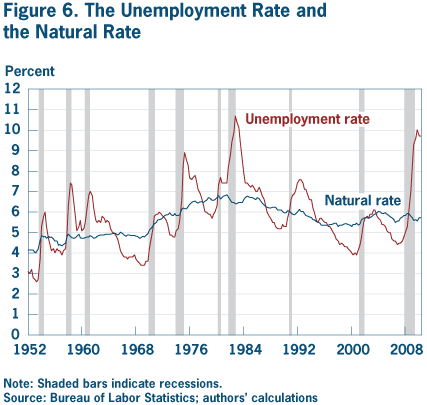 Why is this the case?

An economy could report actual unemployment below the natural rate in multiple circumstances, one such being a shortage of labour across the economy. (usually due to an economic upturn). In that case employers may try to reduce the time workers take to switch jobs and they might be temporarily less stringent in their hiring requirements causing some 'structurally unemployed' workers to get picked up. To cope with the labour shortage, firms may also encourage retired or serially unemployed workers who have stopped looking for jobs (who in both cases are excluded from the labour force) to gain employment thus these people may go from not being counted in unemployment statistics to increasing the population of employed workers and therefore influencing the unemployment rate downward.

Another effect that should probably be considered is that real unemployment can be directly measured via surveys and the natural rate is estimated indirectly based on assumptions of what the equilibrium rate of unemployment 'should' be. There is no direct way to validate whether or not a particular methodology is 'the most correct' and when we are presented with only a graph like this we are trusting that the person compiling the graph did their work correctly. If their assumptions were incorrect then the graph is wrong and there isn't much point pulling our hair out to figure out an explanation for the results of the graph. In your case it looks like the graph is coming from a textbook so you're probably expected to believe that the calculation is reasonable and the answer is something lile the above. In real life graphs tend to have hidden assumptions that very well may be wrong (either intentionally or incompetently) so if something doesn't look right it's almost never a bad idea to start asking questions to validate if the result is truly different from your intuition or if somebody made a bad assumption.

Not the answer you're looking for? Browse other questions tagged macroeconomics gdp unemployment or ask your own question.