Do governments issue debt at low r to pay debt with high r?

I have a question. I know governments do debt rollover from time to time. But, to me it seems logical that governments do this when the interest rate of bonds they have issued in the past is higher than the one they could get now. This way, they pay more expensive debt with cheaper debt. To me this seems like a no-brainer. But is this what they do?

With current QE and low interest rates, are governments doing this? I think they are not. Why?

The phrase governments "do debt rollover from time to time" is an understatement. The entire stock of Treasury bills is rolled over continuously, as well as the coupon debt. For example, a 3-month Treasury bill needs to be rolled over four times a year.

As for the current situation, it is somewhat strange.

These two actions tend to cancel each other out. The only defense of the policy that I can offer in this context is that the central bank is the party taking the interest rate risk. (The central bank has nominally independent finances.) As a disclaimer, I think Quantitative Easing as a policy makes no sense, so I cannot come up with a good rationale for this policy mix.

However, the answer to your question is that we cannot think of the central government as being like a household or business. As the currency issuer, it has a very different perspective on finances, and minimising interest costs is actually not an important policy objective.

For example, it is extremely easy for the government to minimise interest costs: it just needs to set interest rates at 0% by legislative fiat. (Some may object that this is impossible; the experience with interest rate pegs during and after World War II show that the policy is feasible.) However, just because we can minimise interest costs does not mean that it is a good idea. In order for monetary policy to work, the government needs to have bonds that set the rate of interest at a positive level, which can then be varied by the central bank to help control the business cycle.

The primary interests of the government in issuing bonds are:

These competing demands imply a continued juggling act to balance out issuance at various maturity points.

Finally, governmental debt managers do not want to lock in their portfolio of issued bonds as long-dated instruments, as they can do nothing about them. Unlike mortgages, almost all government bonds cannot be repaid early. (The U.S. issued some 30-year callable bonds in the early 1980s.) If the debt is termed out, and the the government has a fiscal surplus (which happened for a brief period in the late 1990s), the government would end up with no Treasury bills outstanding and a surplus of liquidity. It would have to go into the private markets and lend to private sector entities with that surplus, which the government does not want to do. Hence, they need to have a sizeable amount of short-dated paper that can be run off in such a situation.

Debt rollover is a direct result of different bond terms combined with continued deficit spending. When issuing bonds, Governments give buyers the option to purchase bonds at different terms with slightly different rates. In my view this is less related to lowering the interest rate of historical bonds as it is ensuring different segments of the bond market have bond terms suitable for them.

In the U.S this ranges from a 1-month bond to a 30-year bond. Presumably buyers of the 1-month bond will have a different investment profile and financial needs than those purchasing the 30-year bond. Since this is the case, giving different bond offerings allows the government to issue more debt for better interest rates than it would be able to otherwise. However, a 1-month bond is obviously going to expire a lot faster, if the government doesn't have a surplus to absorb the debt and doesn't want to print money, it will have to roll over the debt to a new bond. The same idea carries over to the other bond offerings.

This is happening, to a certain extent. An OECD report highlights that:

In recent years, governments are extending the average length of their public debt and locking in low borrowing rates in a historically low interest-rate environment. Figure 1.12 reflects aggregate figures for government issuance of ultra-long bonds. Compared to precrisis years, government ultra-long bond issuances have increased significantly since 2009 as a result of increased borrowing requirements as well as maturity choice in issuance strategy. Specifically, the annual volume of ultra-long bond sales has almost tripled from 2006 to 2016, as the number of issues doubled in the same period. In recent years, several countries including Australia, Austria, the United Kingdom, 9 the United States, Japan, France, Italy, Spain, Canada and Switzerland have issued a number of securities maturing in 30 to 70 years. Mexico, Belgium and Ireland have sold 100-year bonds, which are called "century bonds". As a result, not only the volume, but also the average maturity of ultra-long bond issues has significantly increased. 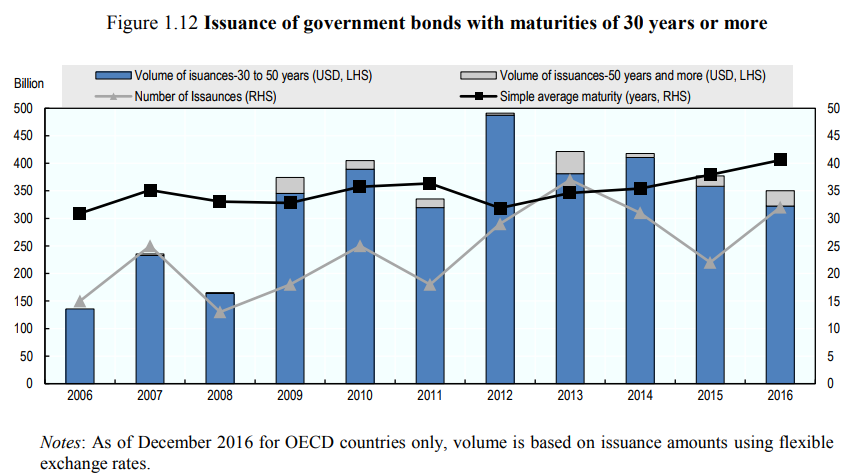 Not the answer you're looking for? Browse other questions tagged government-debt or ask your own question.

7
Why are nations engaging in austerity when bond yields are historically low?
8
Why do indebted governments fear deflation?
4
What happens to undated government stocks when interest rates dip below the coupon rate?
3
Could a hike in interest rates cause a country to be unable to pay back it's debt burden?
2
Government debt and Fiscal Theory of Price Level
1
Government debt constraint
1
How have central banks been injecting currency after crises since 2007?
0
How does IS-LM model reduced investor confidence?
3
Why is national debt bad if the central bank can keep buying bonds?