How can power/electricity prices be negative? 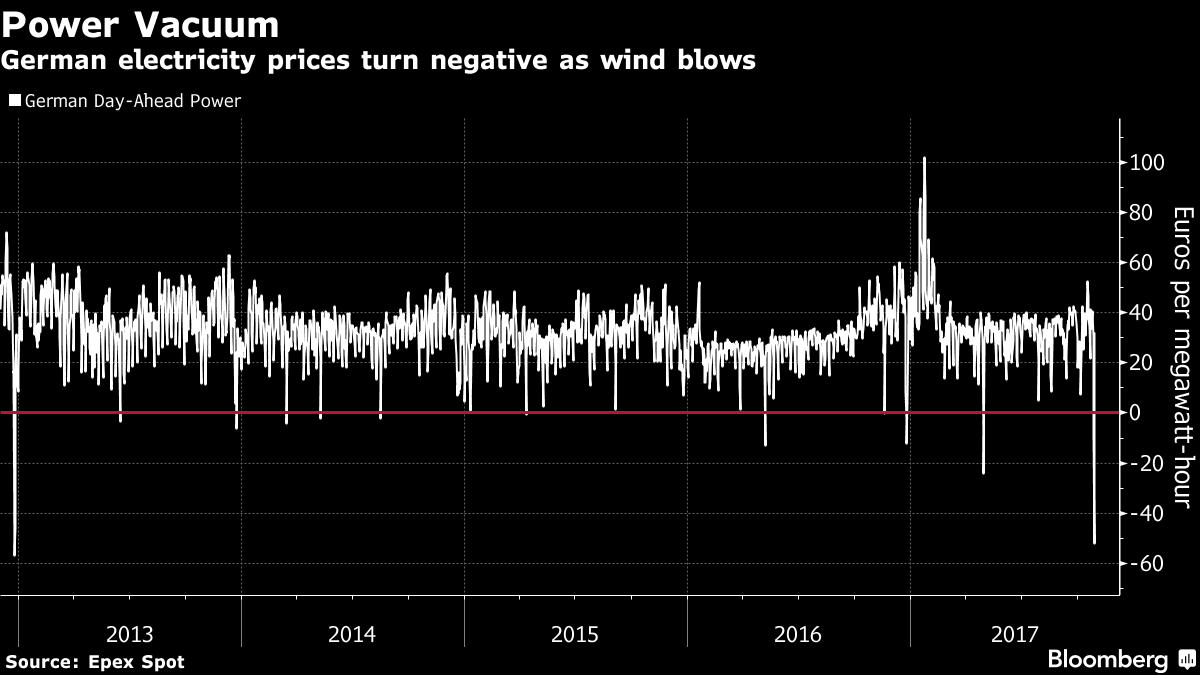 I understand the above chart to mean that consumers were actually paid to use electricity. (Please correct me if I'm mistaken.)

Yes, customers who were exposed to day-ahead wholesale market prices were paid to use electricity.

It is a combination of several different factors that make the day-ahead wholesale electricity market special.

Firstly, very few electricity consumers participate in it directly. So the demand side is very illiquid, with very low short-run elasticity - and it quickly becomes perfectly inelastic.

Secondly, there's very little time-arbitrage. The market for electricity at 0500 and the market at 1500 are two separate markets: there are very few arbitrageurs who can buy at 0500 and sell at 1500. That's because until recently, there's been very low rewards for doing so (more on this, below).

Thirdly, there are several suppliers for whom reducing supply would incur expense: so, for market-clearing purposes, they have negative short-run marginal costs. There are two ways that can happen.

Germany now has such a high combination of those two kinds of generators, that there are times when their combined output is greater than domestic consumption, and that's when prices go negative.

Fourthly, although Germany shares a grid with many other continental European countries, the opportunities for spatial arbitrage are very limited, because total German generation is much much larger than the interconnection power capacity to the rest of the grid: so that interconnection capacity strictly limits the amount of energy that can be arbitraged with other countries within a given trading hour.

Finally, though it seems strange, these negative prices are a good thing. They're a temporary condition that will only last for a transition period, as electricity markets decarbonise. At the moment, we've got transmission networks and market structures that were designed for, and built around, excessively-polluting suppliers such as coal and gas. We have to stop that pollution - the cost of it way exceeds the benefits. So, the industry has to change structurally, and markets and networks will have to change too.

Coal- and gas-fuelled generators have been very helpful for in-day markets, because they can rapidly change the amount they supply. So the near-absence of participation from the consumption side hasn't been a problem at all, until recently - and why the rewards for arbitrageurs were low. But now, there is an increasing number of hours when those very flexible generators no longer dominate the market.

So this isn't just Germany. It has happened, and will happen, elsewhere too.

As many have stated before me, you can't just throw electricity away if you produce too much—it has to go somewhere. If you put more power into the system than the resistant (or consumption) in the system, it is like spinning your bike faster while you bike downhill, the generators start spinning faster, and the frequency increase above 50 Hz.

The second problem is that many power plants just can't shut down. Nuclear power plants take days to turn off, coal plants hours. They, therefore, are willing to pay almost infinitely much to avoid having to ramp down production on short notice. 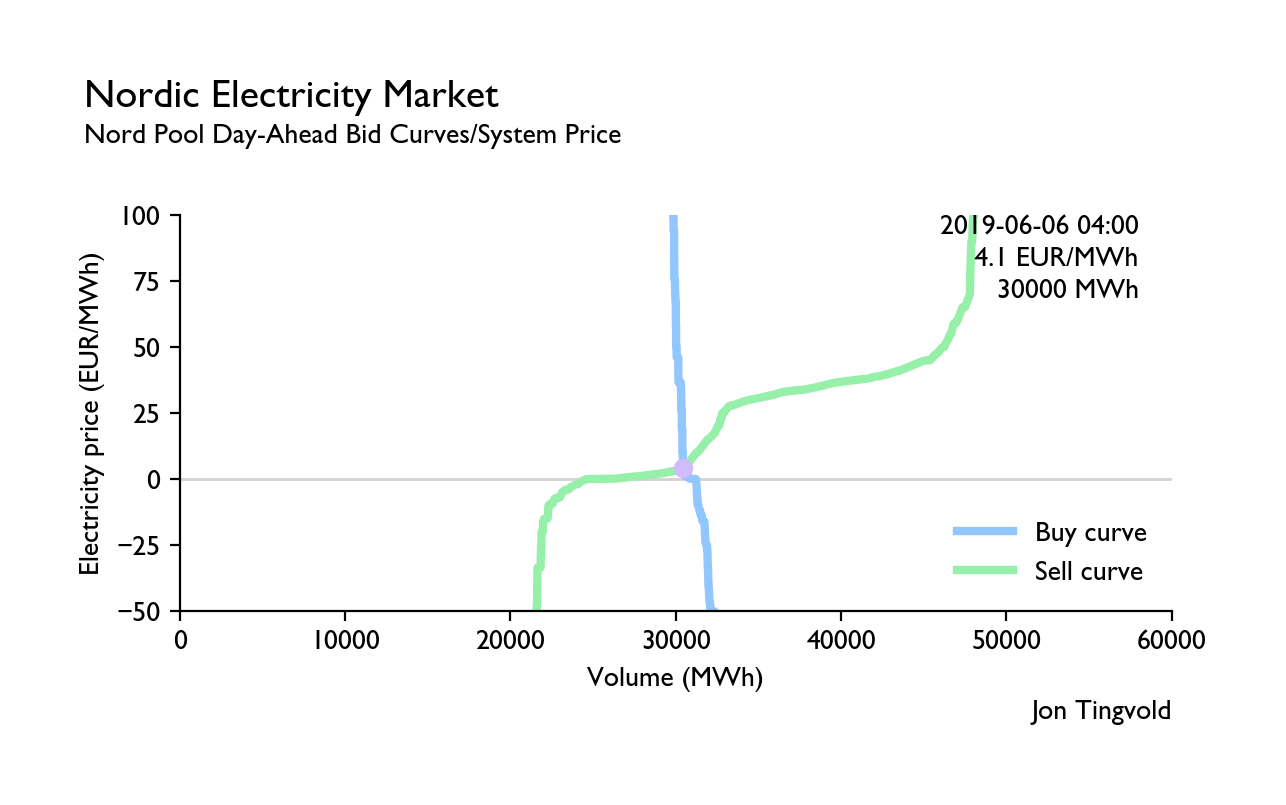 Here is a plot of the bid curves on Nord Pool (the electricity market for Norway, Sweden, Danmark, Finland, Estonia, Lithuania and Latvia) two weeks ago, when the price was especially low, just 4.1 EUR/MWh, for one hour, 4am, at night. (You can find a video/animation of how the bid curves vary in the same period on YouTube.)

You can see that over 22 000 MW (MWh/h) of the power provided are willing to produce power no matter how negative the prices become. Around 10 000 MW of this is nuclear power. The rest is probably coal, some other slow responsive thermal power plants, and some producers that won't be bothered with adjusting their production (small power plants, etc.).

Ca. 10 000 of the power provided, 6200 MW of which is wind, bid around 0 EUR/MWh. Since it is impossible to store energy wind producers and hydropower producers without reservoirs are willing to sell for nothing, however, they can turn off quickly if prices becomes negative. Ca. 30 000 MW of the power provided are regulable power, mostly gas and hydropower from reservoirs, that bid around 25–50 EUR/MWh.

Notice also how insensitive consumers are to prices. Demand is slightly higher if the price becomes negative, but it is almost nothing, only ca. 1000 MW.

In the extreme event that prices would fall below 22 000 MW you can easily see how prices would spike down quite extremely. In the Nordic market(*) where much of the production is regulatable hydropower, this is very unlikely. 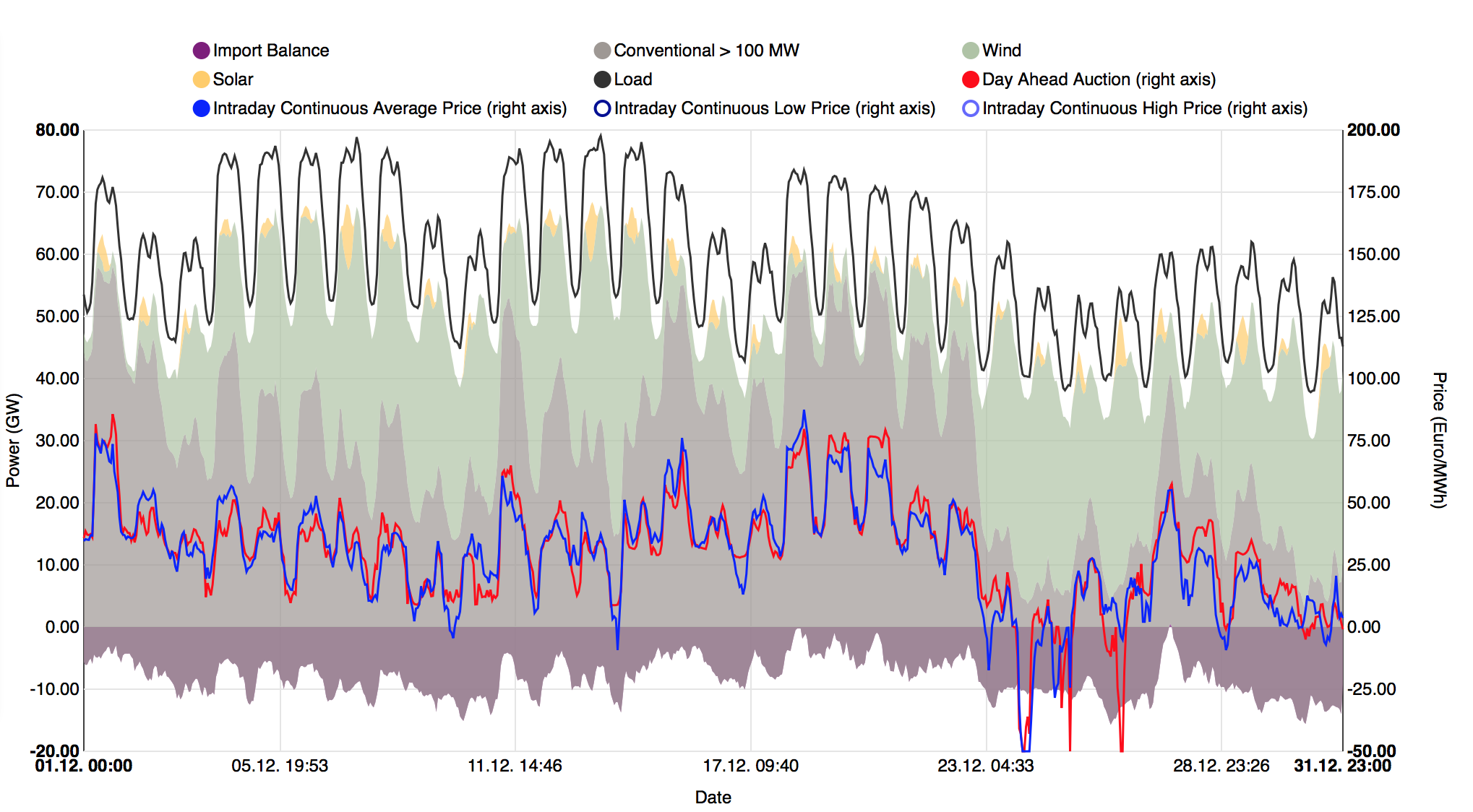 Spot price and power so in Germany December 2017

The problem in Germany is two folded. First, they have a lot more nuclear, coal, small power producers and other unregulated power sources, than in the Nordic market. So when energy demand is low and the wind suddenly starts blowing and generates 80% of the power needed, like it did on Christmas eve 2017 (see Chart), you get too much energy.

However, normally you would expect wind power producers to turn off their turbines, when the price becomes negative. The problem is, as I have understood it, that renewable producers are guaranteed a minimum price for each unit of energy produced. So instead of bidding 0 EUR/MWh, they too bid infinite negative prices. It's only when the spot price is negative for more than six hours, renewable power producers are not guaranteed the minimum price anymore.

Basically negative prices reflect that there is produced more electricity than the market asks for. In all other markets, this is not a problem as you can just refuse to sell, but for electricity, there has to be a balance. You can not stack up electricity in a warehouse.

So to give a bit background information, let us take Nord Pool Spot as an example: Every day at 12 CET suppliers and consumers provide Nord Pool Spot with bids on what they can sell and buy the electricity for per MWh the next day (from 00:00). Link to Nord Pool Spot

The wind power is the zero point. Once the windmill is up, it is (for simplicity) free to use, and you can shut it off if necessary. In other words, giving wind power away is a lost opportunity, but it does not include extra costs for the supplier.

In the negative, we have the forced production, this can come from @EnergyNumbers, third point. If it is more costly to reduce the produce the production of a plant than to pay someone to take it, you would rather do this.

Something that is not mentioned, is that plants typically also provide you with hot water. However, in older plants, the generator is always coupled to the output of the plant. Thus sometimes they have to fire up a plant to produce hot water, and thus also electrical power at the same time, giving them a forced production. Often the usage is high enough to take the forced production, but sometimes this is not the case and you will have negative prices.

This reflects the problem of electricity storage. With most other commodities, there is some way to store it ahead of future need, but in general this option is not so readily available with electricity.

Of course storage is possible. Traditionally this has been in the form of pumped hydroelectric storage, where the "free" electricity is used to pump water back uphill. More generally there are other forms of storage possible, and Tesla is famously planning to contribute with its Powerwall and Powerpack projects.

When grid storage becomes more widespread, it is possible that negative electricity price spikes will no longer occur. Price spikes will still occur, but storage may limit how extreme those spikes are, both in positive and negative directions. At the moment though, it is those negative spikes which allow rather inefficient pumped-hydro schemes to be cost-effective.

2
Ireland wholesale electricity prices are higher during the weekends
4
Why is the Market-Clearing Price also an Equilibrium Price?
4
The Fed pays 1.50% interest on reserves; so why are interest rates so low?
0
Increase in the price of skateboard wheels cause a decrease/no change in the demand of skateboards? (2 separate markets w/ 2 separate buyers)
2
Why are the gas prices so high in the US and why does it depend on OPEC+?