Is undervaluing environmental impact a subsidy?

This is in relation to a recent question on skeptics which to me seems to broil down to whether you accept that form of accounting, i.e. consider undervaluing environmental impact a hidden subsidy.

So, is it this a common or uncommon practice in economics research? Or is it somewhere in between, e.g. does it vary with the school of thought?

Yes, undervaluing environmental impact is a subsidy, within the context of the IMF report that you are referring to.

Here's what that report says in its abstract (my emphasis):

it focuses on the broad notion of post-tax energy subsidies, which arise when consumer prices are below supply costs plus a tax to reflect environmental damage and an additional tax applied to all consumption goods to raise government revenues.

It goes on further on pages 10-11 to define some aspects of the subsidy in more detail.

post-tax consumer subsidies represent the amount by which the cost borne by the consumer falls short of the total economic cost of consumption. This excess cost (or subsidy) is either covered by governments in the form of budgetary support or foregone revenues or passed to the society in the form of environmental damage.

Producer subsidies exist when producers receive either direct or indirect support that increases profitability above what it otherwise would be (that is, the support is not passed forward in the form of lower consumer prices). This support can take many forms, including receiving a price for the output above the supply cost, paying a price for inputs below supply costs, receiving preferential tax treatment, or receiving a direct transfer from the budget

This makes it clear that within the context of that report, undervaluing environmental impact is a subsidy. And that is entirely consistent with how "subsidy" is used within the field of environmental economics generally.

Fuel subsidies are different from subsidies in most other markets because of the substantial external costs of driving.

And Energy subsidies: How large are they and how can they be reformed?, Clements et al 2014:

The subsidy estimates capture both those that are explicitly recorded in the budget and those that are implicit and off budget ... Tax subsidies arise when energy taxation, which includes a corrective component for externalities and a component for revenue consideration, is below the efficient level. The efficient taxation of energy requires corrective taxes to capture negative environmental and other externalities owing to energy use.

And Fossil fuel subsidies in the Pacific island context: Analysis of the case of Kiribati, Peltovuori (2017)

Subsidy in this report is defined according to the definition of World Trade Organisation's (WTO) Agreement on Countervailing Measures (ASCM) (Uruguay Round Agreements, 1994). This definition has been recommended to G-20 by the Global Subsidies Initiative (The Global Subsidies Initiative, 2010). The methodology for quantifying fuel subsidies in this study is the price gap approach. In the price gap approach, a cost recovery price for fuels is first estimated based on the world free on board (FOB) market prices. All additional monetary and non-monetary costs such as transport, storage, distribution costs, and corrective taxes to account for externalities are then added on top of the FOB price. This cost recovery price is then compared to the actual price. The gap between the two prices is the amount of subsidy per price unit.

These pollution costs are included within the broader definition of subsidy as used by the IMF, because these negative production externalities are costs incurred by production, that the producer itself does not directly bear. Thus, those costs are not reflected in prices, leading to market failure and an unfair competitive advantage, of the same kind and market impact as if they'd received a cash subsidy on their directly-incurred costs. 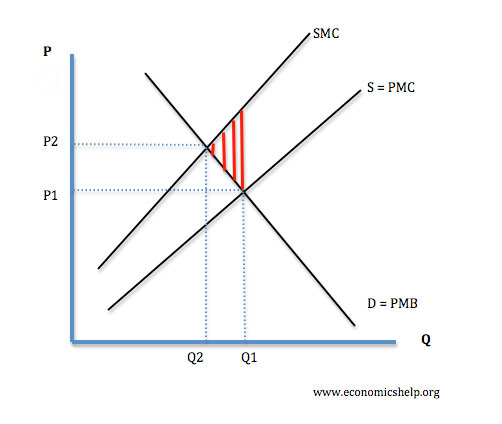 The deadweight loss from coal pollution is the red striped triangle: this comes about because coal producers do not have to pay for their pollution, leading to a competitive advantage, and an artificially high quantity sold Q1 at price P1.

Not the answer you're looking for? Browse other questions tagged environmental-economics subsidies or ask your own question.

5
Adjusting GDP for Environmental and Resource Impacts
9
Limits to Growth: Is environmental collapse by 2030 a likely scenerio?
2
Calculating the impact of a per-unit Subsidy given to Consumers?
4
How does the U.S agriculture subsidy not constitute export subsidies under the WTO?
0
Reference request about econometric analysis of Environmental Kuznets curve
0
Can there exist something that subsidises that is not a subsidy
2
Is my reasoning about economic growth and environmental sustainability correct?
0
How to show consumer subsidy (rebate) on supply and demand diagram?