Suppose there is a linear demand function $D(p)$ describing the demand of an individual consumer. This is derived from a utility function or is just observed, but let us assume it is correct. Now suppose that the product is available at price $p$, but the store insists that each consumer buys a minimum amount that is in fact larger than $D(p)$, but only by very little.
Say it is $D(p) + \epsilon$, where $\epsilon < D(p)/100$.

Can I say without additional assumptions that given the options of buying a quantity $q$ where $q \in \left\{0\right\} \bigcup \left[D(p) + \epsilon,\infty\right)$, the consumer will choose to buy $D(p) + \epsilon$?

My argument is that this will maximize her consumer surplus given the constraint on $q$. As I specified that this is a linear demand function and $\epsilon < D(p)/100$ you can do the math, but it is easy to see that the surplus will be positive for any continuous demand function given a small enough $\epsilon$.

Is this an accepted line of argumentation?

In most models it is accepted that consumers seek to maximize their utility. I am not sure however if one can argue absent a utility function that surplus maximization is the goal.
A workaround would be specifying a quasi-linear utility function supporting $D(p)$ but I would like to avoid this if possible.

In the constrained case, the consumer will either choose $(0, \tilde z)$ or $(x^*+\epsilon, z'$), for some $\epsilon >0 $ always exhausting its budget, so in particular, $\tilde z = I/p_z$. In order for the consumer to still choose to buy a strictly positive quantity of $x$, it must be the case that

Apply a first order approximation around $(x^*, z^*)$ without ignoring the remainders, we want

Simplify and re-arrange, we want

Note that the above take into account also the signs of the remainders, it is not just about their absolute magnitudes.

Now let's go back to our first-order expansions. We know that both candidate bundles yield utilities lower than $U(x^*, z^*)$, because they were feasible in the unconstrained case, and they weren't chosen.

Looking at the expansion of $U(0, \tilde z)$ we then conclude that we have

Performing the same manipuations as before we obtain here too that

This formalizes somewhat the notion that if $\epsilon$ is "sufficiently small", $R_{\epsilon}$ will be smaller in absolute terms than $R_0$, since the approximation to the same function will be "better", and so we will observe $x^*+\epsilon$ and not $0$. But it also tells us what the graphs in the other answer told us too, that there is not a single general answer to the matter.

It appears that the consumer faces an exogenous additional constraint in her optimization problem, which restricts the feasible set for the good in question, say $x$. We take this for granted: the consumer will buy either zero or at least what the store demands at the minimum, say $\bar x$. No other options are available. But this means that the consumer must solve again her optimization problem, incorporating this additional constraint and its effect on the feasible set - the "initial" demand function is not relevant anymore, because it represents a solution to a problem that has just been altered.

What will the result be? 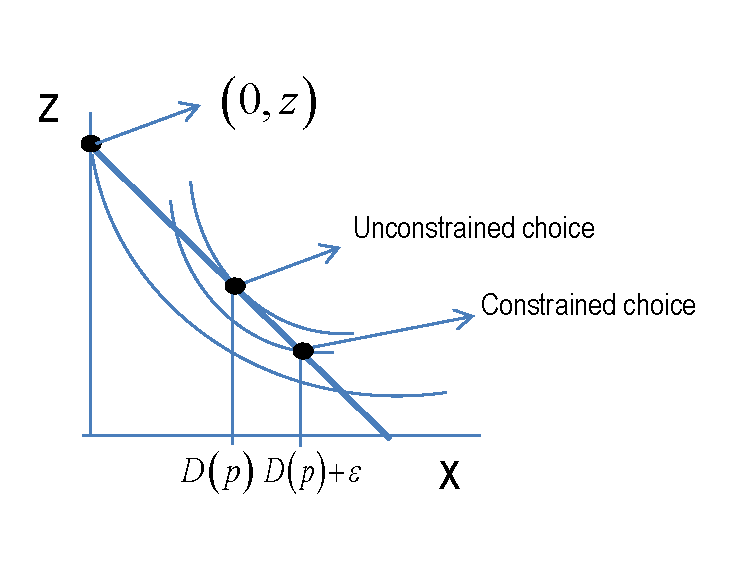 Choosing to buy zero will send the consumer to an even lower utility level, than the one forced on her by the minimum quantity requirement.

EDIT by denesp: What about this graph though? 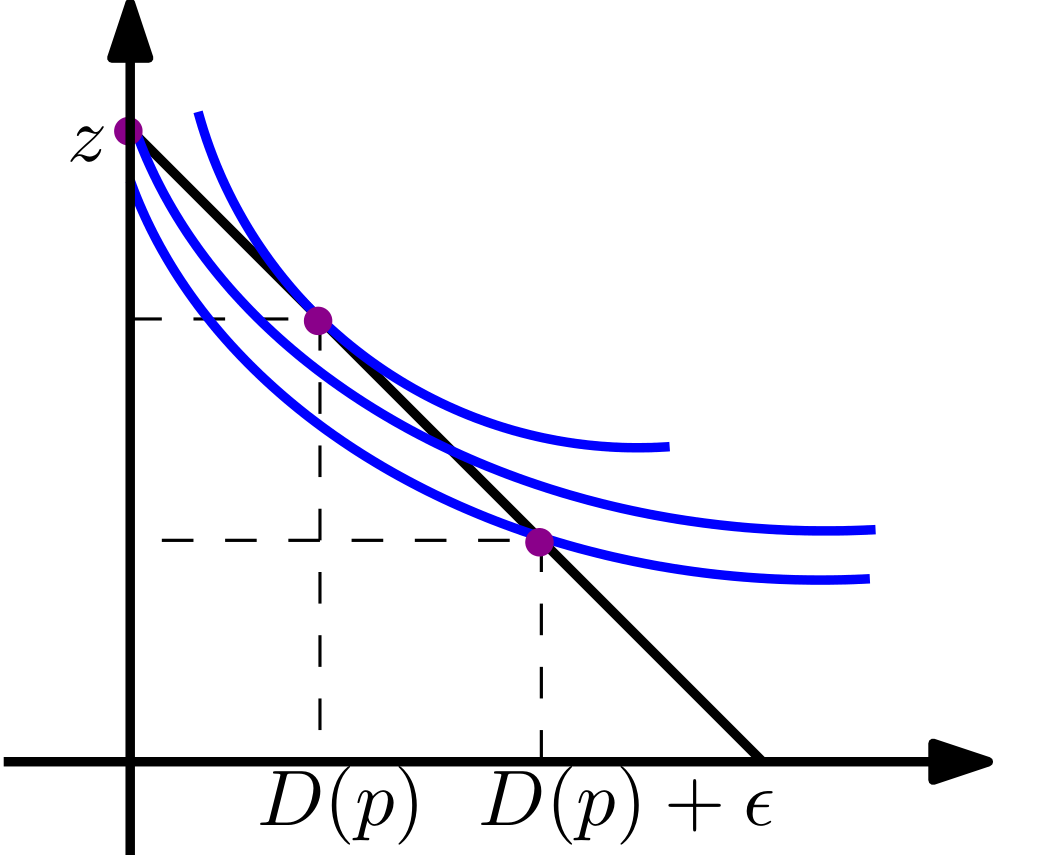 RESPONSE : It does tell us what we should expect after all: the smaller the quantity demanded in the unconstrained solution, and the larger the distance of this solution from the minimum quantity required by the store, the more possible it becomes that the consumer will choose to buy zero in the end. So it appears there is no single answer to the general question, even under "usual" preferences. Intuitively of course, if the distance is "very small" and the unconstrained solution is not "very small" to begin with we expect that usual preferences will lead the consumer to buy the bit more that the store requires.

Maybe all this could be made into a rigorous description exploiting the lengths measured on the budget constraint between, the zero bundle and the unconstrained solution, and between the uncostrained solution and the minimum quantity required by the store.

Not the answer you're looking for? Browse other questions tagged microeconomics consumer-theory consumer-surplus or ask your own question.

4
Equilibrium price and quantity - consumer and producer surplus
5
Stone-Geary utility function, derivation of Marshallian demand
3
Derive demand function from utility function with constant elasticity
3
Change in Consumer Surplus with Two Price Changes: Is it Path Dependent?
1
Consumer surplus with isoelastic demand
0
Numerical Question on a subsidized monopoly
0
Does utility in economics also refer to producer's surplus ? How to balance the consumer surplus and producer surplus?
3
Integral solution (or a simpler) to consumer surplus - What is wrong?
2
Calculating Consumer Surplus Given Table