Who determines the exchange rate and how?

I have almost no knowledge about economics. However, a question always comes in my mind. How exchange rate really differ? I live in Bangladesh. So how, why, who changing BDT and US Dollar exchange rate?

In many ways, it's no different to how any other price is set - by supply and demand. The only thing is, that because it's a transaction of money for money, there's some symmetry at play.

When you buy USD with BDT, the price you pay for your USD will go up if the general market demand for USD goes up, or if the supply of USD goes down. Similarly, it will go down if USD demand goes down or USD supply goes up.

Bear in mind that because there is an active international market for these currencies, then the relative values of each reflects a minute-by-minute shifting balance between buyers and sellers of each; and the exchange rates reflect all available information, as well as the market participants' future expectations.

Technically you are changing the BDT/USD exchange rate, or at least you're changing one of the reasons. If supply/demand changes, the value of a particular currency is going to change as well. But there are other factors - interest rates and political climate also affects the rate. To give you an example, Venezuela is now going through some rough times, perhaps not many people are willing to buy their local currency (VEF) today because tomorrow it may be not be worth the original investment, as as consequence the exchange rate BDT/VEF will increase: you can buy a lot of Venezuelan Bolivar with a few Taka. Each country then has its own policy to set exchange rates - basically there are two of them.

In this system the rate is fixed by supply/demand. Roughly speaking: a currency is worth whatever buyers are willing to pay for it. So, for example if (for some reason) many people in US are buying Euro (EU) then the demand increases, and so will the price, the rate USD/EU will drop and you will get fewer Euro for each US Dollar. Conversely, for Europeans the Dollar will depreciate as more USD were supplied to the market.

Usually countries with very mature/estable currencies have these systems (e.g. Canada, Switzerland, United States), allowing the exchange rate to adjust itself to local conditions (inflation, supply, demand, $\dots$). Although this may sound great, it actually has its drawbacks, for instance, lack of certainty may refrain some investors. One may argue that the fact that the economy is stable in these countries, then we're indeed certain of what's going to happen before an investment, but I guess that's a whole other story.

Below there's a graph of the evolution of the exchange rate for the Swiss Franc to USD: 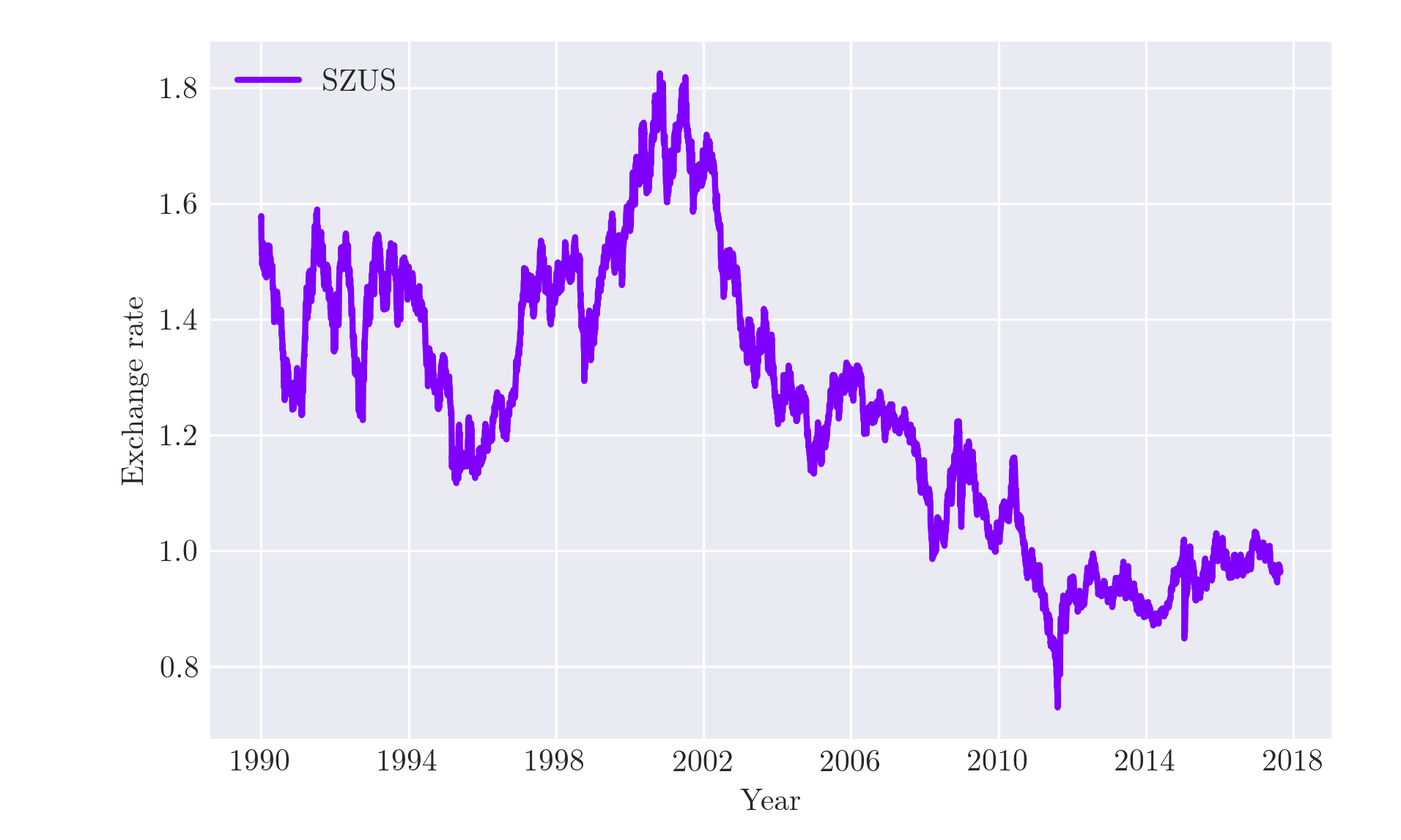 In the curve bellow I show the exchange CHY/USD, you can immediately see that in the period 1998-2005 (for instance) the Yuan was pegged to the Dollar: 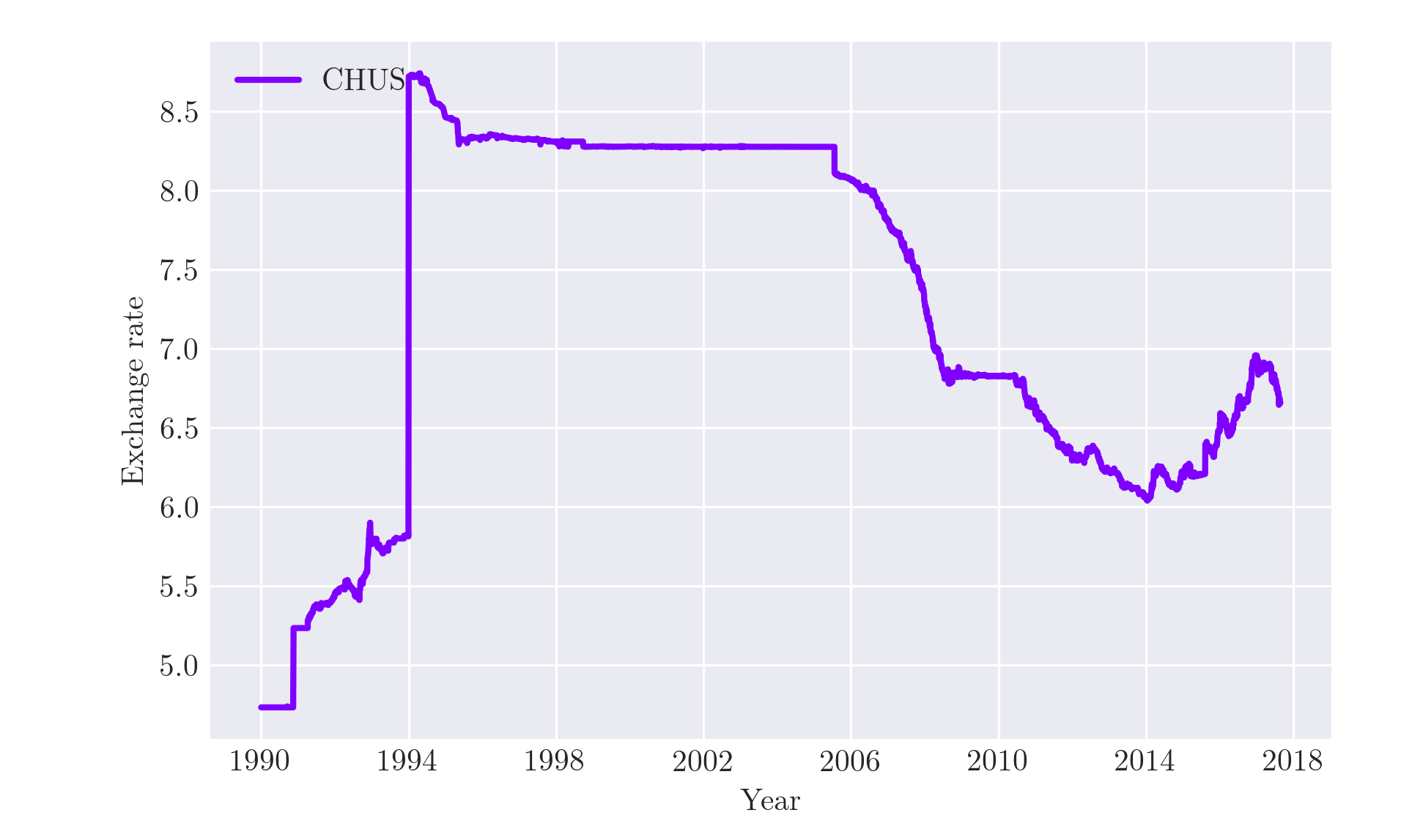 After 2005 the model is changed, and they decide the exchange rate from a basket of external currencies.

In practice all governments make local decisions to modify the exchange rates, for instance to help import/exports they can slightly provide supply/demand so that the rate is modified.

Not the answer you're looking for? Browse other questions tagged exchange-rates foreign-exchange or ask your own question.

1
How are the rates between two currencies (fiat and cryptocurrecies) determined?