Effect of a permanent increase in government expenditure in an open economy?

In Krugman & Obstfeld's International Economics, 8e, Chapter 16, an involved argument is given showing that a permanent fiscal expansion will not affect output even in the short run. It seems to me that this is a saddlepoint stability argument in disguise. Am I right in thinking this? Can someone please help me with a differential equation formulation?

The intuition for this result is pretty straightforward, and I think one can think about it in terms of saddlepoint stability in a phase diagram, although you don't need any serious technical apparatus - it's all conceptual.

Krugman and Obstfeld posit a model in which government expenditure does not affect the "full employment" level of output $Y^f$ (to which the economy must tend in the long run - note that proving this requires you to look at a phase diagram and rule out the explosive paths that fail to converge to $Y^f$). The money supply $M^s$ is also assumed to be constant. Together, these assumptions imply that the steady state price level $P$ doesn't change.

Now Krugman and Obstfeld, critically, also assume that you're already at the steady state price level $P$ when the permanent increase in government expenditure occurs. And even once the increase hits and the phase diagram changes somewhat, this $P$ is still the steady-state price level (i.e. the price at the unique fixed point of the implied system of differential equations).

In their world, $P$ is the only state variable. (Prices are sticky, but quantities and exchange rates are not; they're jump variables.) Since you're already at the fixed point's value of $P$, the other variables will immediately jump to their fixed point levels and stay there. (This is always true for models where the fixed point is a saddle and equilibrium is unique.) And since the fixed point for output is unaffected by the expenditure shock, this means we stay at the same output even in the short run.

Conceptually, the point here is that we only get nontrivial dynamics from a permanent shock if that shock changes the fixed point values of state variables. This happens, for instance, in the neoclassical growth model following a permanent TFP shock, because an increase in TFP raises the steady state level of capital above the current level of capital. But it doesn't happen here, since under Krugman & Obstfeld's particular set of assumptions there is only one state variable and it's unaffected by permanent changes in government expenditure.

The following is a trivial fact: in the short run, if we are producing at maximum capacity ("full employment of all factors of production"), we cannot produce more no matter what the demand for our product is. That's a tautological "conclusion".

Given this I find the exposition of Krugman & Obstfeld problematic:
Based on the 6th edition, I see Figure 16-16 page 459, where they picture the case of permanent fiscal expansion. 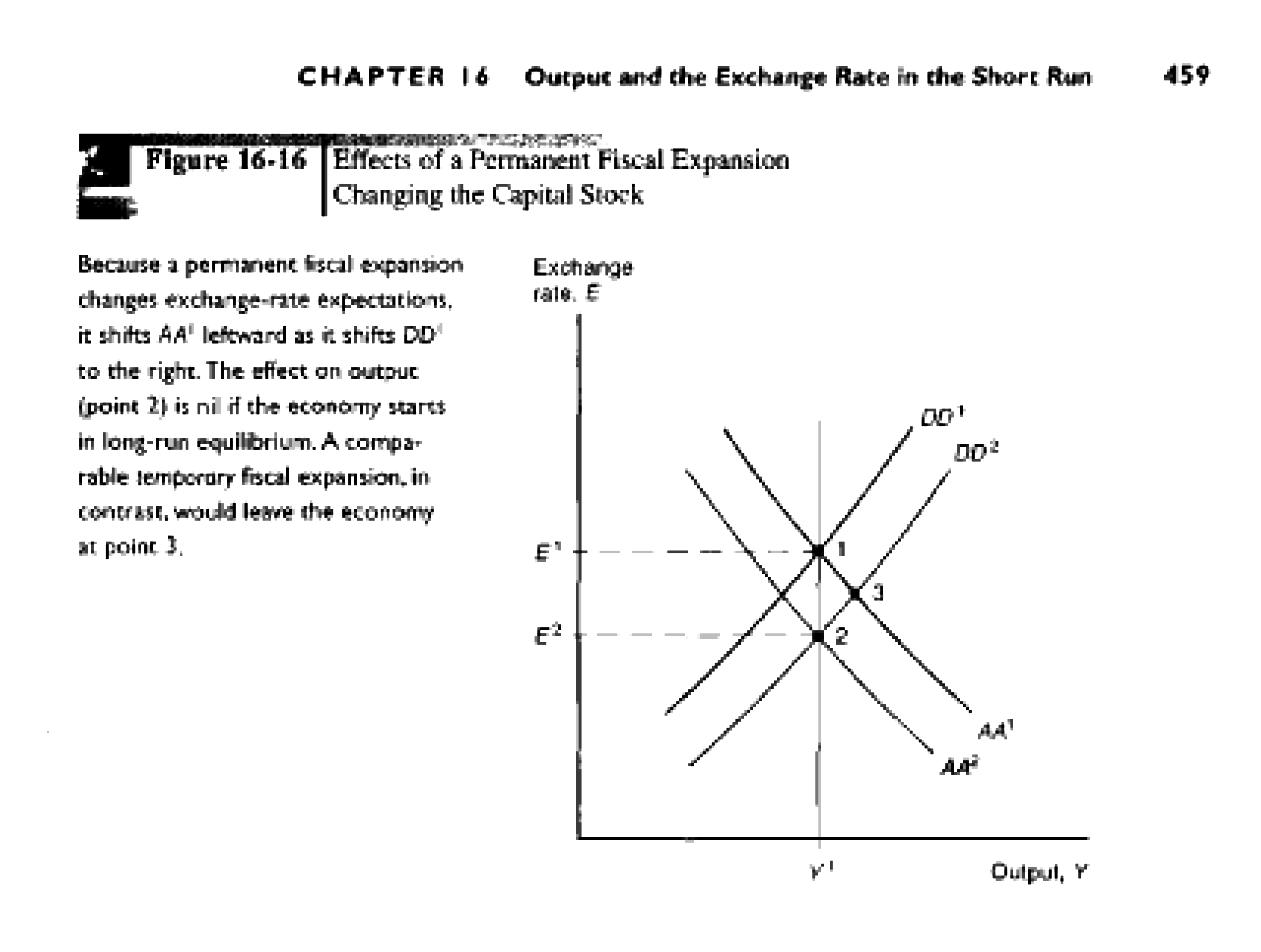 The legend says: "the effect on output is nil if the economy starts at long-run equilibrium". But reading the text below the figure, the main argument here appears to be not the fact that we are at long-run equilibrium (and so at full employment, and so producing at maximum capacity), but that the expansion being permanent and not temporary, it has a direct effect on the assets markets (through exchange rate expectations), that offsets the "tendency" to increase output. But tendency or no tendency we cannot produce more output in the short-run, because the authors, in p. 456, when they start discussing effects of permanent changes, they explicitly assume indeed that "the economy starts out at full employment".

But the authors comment (in the figure but also in the text below), that if there was no effects on expectations, the economy would have moved to a higher output level. This is inconsistent with the assumption of being at full-employment (of all factors of production).

Note that the word "output" is consistently used, which directly links to production, and not the word income which could perhaps accommodate international distributional changes, or the running down of possibly existent inventories. This is obviously a problematic exposition.

Not the answer you're looking for? Browse other questions tagged international-economics open-economy-macro or ask your own question.

2
Is Dollarization a good decision for a small open economy with an economic cycle that weakly correlates with the anchor country?
5
Teaching: from Microeconomics to Open-economy macro
0
Do I make correct conclusions about international trade (and ways to increase GDP) from the expedenture approach formula for GDP?