What famous company that turned a loss at its first year(s) but then became profitable? [closed]

In a discussion with a friend, he mentioned that a new company may fail to gain profits for several years before it becomes profitable. I asked him for examples but he did not know any. I though of Amazon, but I think they made "some" profit in their first year. Could you please tell me What famous company name that turned a loss at its first year(s) but then became profitable? It would be great if you have an easy reference for me to refer to. I am not in financial business.

It is very common for a company to have a loss (i.e. expenses > revenue) in the first year. Amazon is actually a very good example of that. It’s also a good example of ‘growth before profit’ strategy.

Amazon was incorporated on July 5, 1994, and begun service in July 1995. This means that not only it did not generate profit in its first year, there were also no sales. Even after the launch the company generated loss:

Amazon had stated from the outset that it did not expect to turn a profit for four to five years, and it duly delivered on its promise. The firm grew quickly but failed to generate profit, making a net loss of USD -303,000 on net sales of USD 511,000 during its first six months of trading. At the beginning of 1996, Amazon employed eleven people and moved out of Bezos’s home to a small warehouse nearby. By the end of the year, Amazon.com offered 2.5m titles online, although it still carried only a minimal inventory. By this point, the firm had 151 employees and relocated once again to accommodate its growing workforce. Sales for 1996 were USD 15.7m, with the company making a net loss of USD 5.7m.

Please see below historic results from Amazon’s first public annual report from 1997 (the year of IPO):

As for an easy reference, @denesp cited an interesting source on this. There are some slight differences in the data, so I thought I would cite it alongside with annual report data, which is more precise. 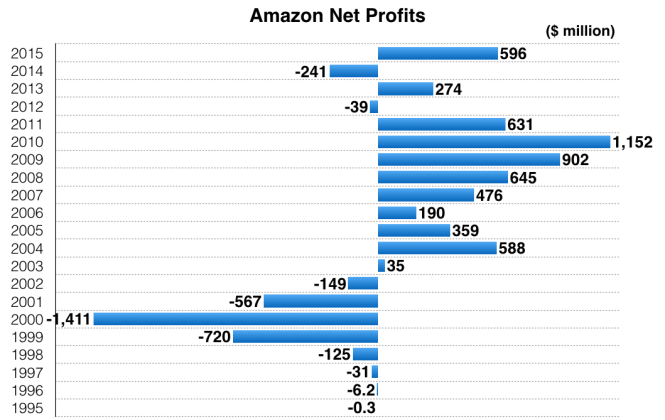 Not the answer you're looking for? Browse other questions tagged profits or ask your own question.