What's the term for an economic policy that has negligible effect for most, but a significant effect for a few?

I remember this came up around tariffs in the US on aluminum. They have a negligible effect on the price of an aluminum can, but aggregated across all the aluminum cans sold, it can have a significant impact for a handful of US aluminum producers.

While I tend to agree with the notion of Tragedy of the Commons as per the comments, I will provide an additional economic framework to answer your question. Perhaps this is something you already know, but is nonetheless useful for answering your question as per the welfare-economics tag. As to the exact name of the policy, I'm not sure there is a name for the policy, but the underlying economic concept can be characterized as a utility trade-off and that's likely how a policy maker would approach this.

Consider the following social indifference curve, I just made it myself, don't scrutinize it too much: 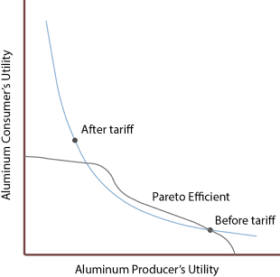 Assuming the First Theorem of Welfare Economics held before the tariff, then that point would have been on the pareto efficient curve which is the gray line in my graph. This curve is also known as the utility possibilities curve, which shows the highest utility one party can have without reducing another party's utility.

In your case, since the aluminum producers were worse off, then this is a utility trade-off. And we recall that society may be willing to trade off one group's utility for another's utility, sometimes on the grounds of equality, but for other reasons too.

Not exactly the name of an economic policy, but maybe you are searching for Public choice theory?

Diffused costs and concentrated benefits are famously described by Public choice as the results of rent seeking organisms able to effectuate political pressure to gain some form of regulatory capture or structural advantage over an otherwise free market. I'm not sure if I've heard a formal name for that kind of policy, without a judgement of the intentions embedded in the name that is.

2
What's the term for consumers not being able to pay their mortgage?
1
What would happen if total welfare were evenly distributed?
2
Economic term for relation between drug and companion diagnositic
2
What effect does a wage ratio cap have on the efficency of allocation of labour?
0
What's the term for the debt you have to pay today?
3
Is there any academic source that uses the following 'standard broad' definitions of externality?
3
How long into the past can we trace the effect of institutions?