How can China shield its public from the effects of a trade war?

I found an interesting read in the NYTimes today. It read:

The Chinese government also has much greater control over the economy, allowing it to shield the public from job cuts or factory closings by ordering banks to support industries suffering from American tariffs. It can spread the pain of a trade war while tolerating years of losses from state-run companies that dominate major sectors of the economy.

I could not understand what that meant. Could anybody explain it?

Barry Naughton is an authority on the Chinese economy. He offers evidence on China's government control over the economy in a nice paper called "Is China Socialist?"

China's government controls an unusually large proportion of national income flows. He argues that these income streams have grown dramatically as a share of GDP since the mid-1990s. He shows how the Chinese government steers the economy because it sees a strong economic performance as a core part of its political legitimacy. China's government has some tools to "shield the public from job cuts or factory closings" because of American tariffs.

Beyond the tools of funding direct government programs and ownership, the Chinese system has two distinctive mechanisms through which it attempts to foster development: 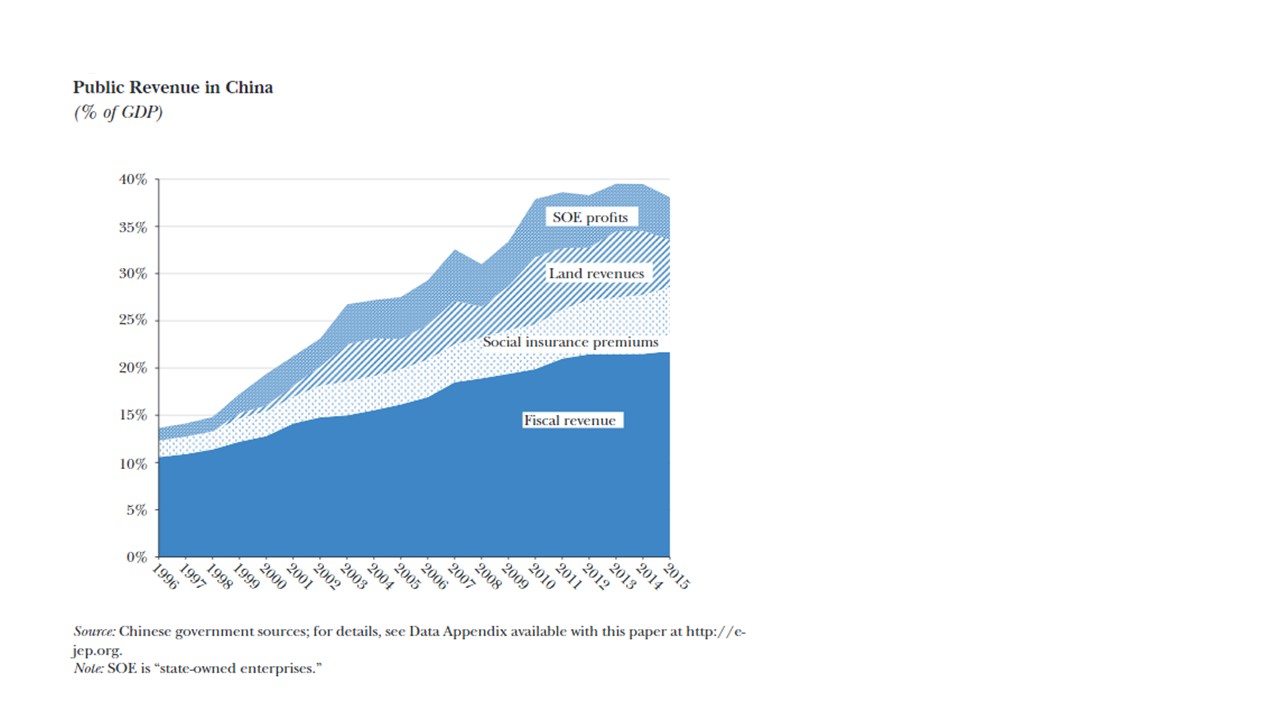 The above Figure illustrates an expanded concept of government revenues that includes four main components:

These four components help Naughton providing an index of government control of resources, which tripled as a share of GDP between 1996 and 2013. This index gives an indication of the overall size of the Chinese government. For instance, all land in China is publicly owned: urban land is owned by the state, and housing is "privately owned" only in the sense that households hold long-term leases, typically of 50–70 years. The financial system in particular is overwhelmingly dominated by the state-owned banks, which generate substantial profits.

The Chinese government can force banks to lend to factories experiencing job cuts, or to subsidize failing businesses. They can also shift production (due to their control) to sectors not impacted by the trade war. Spreading the pain however means that in order to do this, their central bank may need to increase liquidity, which can lead to an inflationary scenario. But instead of one sector impacted by the tariffs, the pain can be spread to everyone via inflation, which they feel is marginally better than an entire industry shutting down. So if a semi conductor firm is impacted by the tariffs for example, the government can issue loans to that firm to keep production going in-spite of the reduction in demand in America. The firm can find other buyers in other countries and can be sustained after the initial “shock” of the US tariffs. In America, it is unlikely that the government will force banks to lend money to failing industries, although it is still possible for our government to manipulate production obviously. We just don’t to the extent that China does.

Not the answer you're looking for? Browse other questions tagged international-trade free-trade china or ask your own question.

4
How much of the Greece's public debt is created by its trade deficit?
2
How is it possible that shipping of eBay items from China to US is 'free'?
0
Understanding the effects of government deficit on international trade
4
How can a RTA have a trade imbalance with itself?
1
Trade in services between the US and China
3
China - US Trade War: Holes in this analogy?
0
Where can I find the statistics of import crude oil to China?