What are the (immediate) effects of changing a good's price on consumer and producer surplus?

Say the price of a good is the equilibrium price. Now make it more expensive. I know that after a while the price will adjust to the equilibrium again, but what will happen before that? I'm trying to use an example but there are things I can't fill in:

Now make the good \$30. The quantity demanded falls to 15 and the quantity supplied rises to 25. Now, the consumer's surplus is the triangle I marked in blue, $\frac{1}{2}(40-30)\cdot15=75$ (because only 15 items will be sold), but what about the producer's surplus? Is this the triangle I marked in red? I think not, because that seems to imply that the price is only \$10. But if not, what is the producer's surplus, and why? 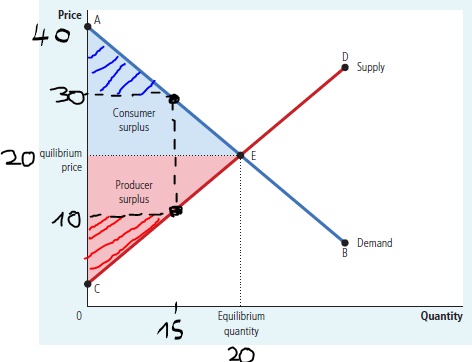 Thanks in advance and my apologies for the possibly confusing phrasing.

I think that answer to this question lies in misunderstanding the definition's of consumer and producer surplus.

The consumer and producer surplus are actually (following Mankiw Principles of Economics, 8th ed, pp 135 and 140

consumer surplus: the amount a buyer is willing to pay for a good minus the amount the buyer actually pays for it

producer surplus the amount a seller is paid for a good minus the seller’s cost of providing it [where Mankiw later in chapter explicitly states cost is here to be interpreted broadly as "the value of everything a seller must give up to produce a good", including the opportunity cost (or more broadly s wilingness to sell)].

You will note that the definitions above talk about price people pay (i.e. actual market price) not 'equilibrium price'. Some lecture notes or textbooks will include the word equilibrium in the definitions but that is only because virtually all analysis using Supply-Demand is an analysis of some equilibrium.

where $D(q)$ is arbitrary demand curve, $p_m$ is price consumers have to pay in the market, and $q_m$ quantity sold at the market.

$$PS = p_mq_m - \int^{q_m}_0 S(q) dq $$ wher $S(q)$ is some arbitrary supply curve (also if we would want to be even more general we could allow $p$ to be different for suppliers and consumers e.g. situations with taxation where there would be wedge between price consumers pay and price per quantity suppliers get due to the tax wedge).

Consequently, in your case the consumer and producer surplus can be properly visualized as shown on the tikz graph below I made: 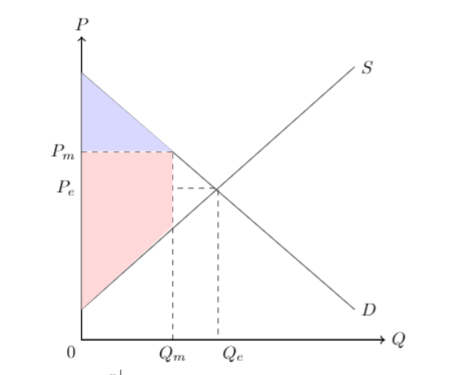 We can also calculate the area of that trapezoid, although to do that we need to know what is the price at which $Q_S=0$ (or explicitly know what the supply and demand equations are). In your question you don't state what the price at which supply is equals zero is but if you would provide it we could calculate it (also you seem to have made some mistake when copying down the problem as your demand does not lie on a line since it is given by points $(0,40);(15,30);(20,20)$ - which simply mathematically cannot lie on a single line - I originally planned to go all the way deriving the linear demand and supply equations based on the points but this mistake in problem set up makes it impossible ).

Why is total welfare maximized in equilibrium?

I won't be providing a rigorous proof of this as that would require a lot of calculus and this problem is long as it is, but I encourage you to take a look at proofs provided in MWG, Microeconomic analysis pp 328 or Varian, Microeconomic Analysis pp 224 if interested.

However, the reason why the welfare be easily seen graphically by the following thought experiment: would the total surplus be larger if $P>P_e$ or if $P<P_e$? The answer is no as you can see visualized in the two figures below. As in both figures below the total surplus area will always fit within the big triangle given by area below demand and above supply clearly the total welfare is in both situations lower than the total welfare in a situation where $P_m=P_e$.

I see a lot of these posts are very complete, and I think a more direct answer might be beneficial here.

The supply curve represents the amount that producers are willing and able to sell at. Producer surplus is the space between the existing price and the supply curve.

The demand represents the amount that buyers are willing and able to buy at. Consumer surplus is the space between the existing price and the demand curve.

The CS and PS are bound to be below the observed Q (that's to the left!), since no one receives anything for units that have not been exchanged in the market. They also must stay above 0 also.

As quantity increases from q = 0 to q = qe (equilibrium quantity) the price rises at each point on the supply curve S(q).

The producer surplus is defined as the area in the rectangle pe x qe minus the area under the rising supply curve AS(q) as quantity goes up from q = 0 to q = qe. When you get to qe you stop doing the calculation so there is no meaning associated with data points to the right of the equilibrium point with respect to producer surplus definition.

I don't know why the terms consumer surplus and producer surplus are used in this context. In a counterfactual world the limits of the calculation might be less than or greater than the equilibrium point, and then consumers would spend less or spend more, and producers would sell less or sell more, but in those counterfactual models one must move the supply and demand curves to a different point of intersection to recognize sales at the same supply and demand price.

In reality goods sell at price times quantity. If the producer drives down the price sufficiently consumers tend to buy in greater quantity. Early adopters of high definition TV or electric cars are willing to pay more so sales occur at higher prices and lower quantities. Producers use the learning curve and invest in fixed costs to drive down prices and increases quantities produced, and demand goes up as prices come down over time. All during this process the supply and demand curves are moving around and do not represent a static calculus solution.

Not the answer you're looking for? Browse other questions tagged microeconomics supply-and-demand price consumer-surplus producer-surplus or ask your own question.