I am doing an essay on how a sovereign debt rating downgrade to junk status affects the economy. I wanted to use a theoretical framework to think about it, and seeing as an increase in the interest rate is involved, I decided to use the IS-LM model. Please tell me if the following is correct or not. I think it's a bit unconventional to shift the LM curve when money demands shifts, but the reason why I do that is because output was not the driving force of the shift in money demand. As I understand it, if output increases, that increases money demand, which is a movement along the LM curve. However, in this case, investor confidence affects the interest rate directly, without an initial effect on output. That is why I have shifted the LM curve upwards.

I presented the model as follows. Investor confidence drops with the news of a rating downgrade, so financial investors sell their bonds, which increases the demand for money, and decreases the prices of bonds. Because the prices of bonds decrease, interest rates on those bonds increase. Also, new bonds will have higher interest rates because they are seen as more risky. This is shown graphically in the money market model below as the first increase in money demand from $D_{M_1}$ to $D_{M_2}$. (I find it a bit confusing to think about foreign investors demanding more money (like M1), because I think they would want to sell the rand in exchange for their own currency, but I think this is true for the domestic economy.) 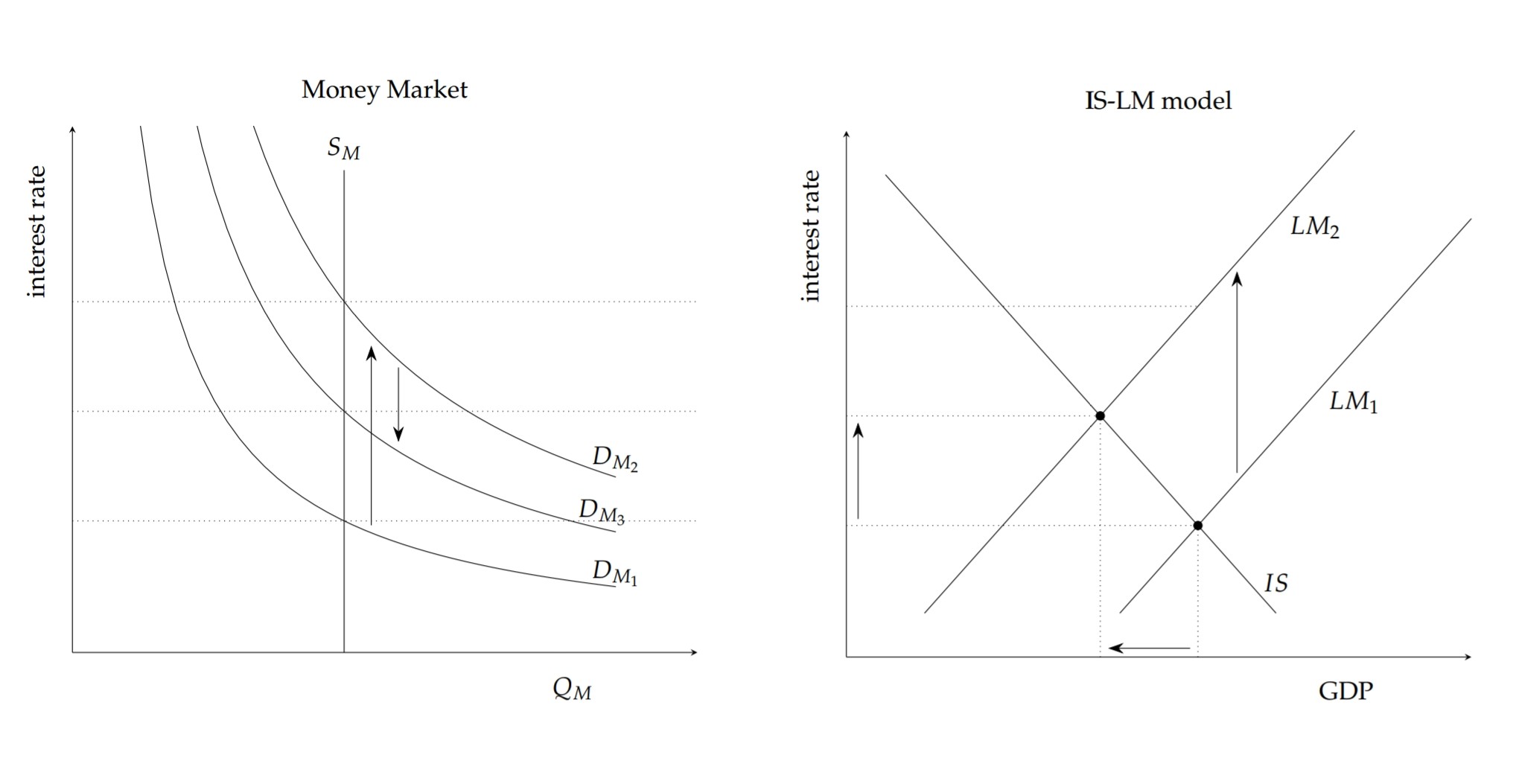 Because the money market is the basis of the LM relation, this shifts the LM curve upwards as the interest rate increases (shown as the increase from $LM_1$ to $LM_2$). Higher interest rates lead to lower real investment (i.e. investment in capital, land, labour and enterprise), government spending and consumption. This is equivalent to a movement upwards along the IS curve. The IS relation shows equilibrium in the goods market, which is given by $Y=C+I+G$. $I(i)$ is a (decreasing) function of the interest rate, and the interest rate increasing is what causes real investment to drop. It is a negative relationship because higher interest rates make it harder to borrow money to finance investments. In our situation, government spending decreases because the cost of credit for them increases, but rising Treasury bond interest rates also raises other interest rates throughout the economy due to competition, which then reduces private investment. The result is a decrease in the growth rate of output. The drop in output actually dampens the increase in the demand for money, because income decreases. So, the hike in interest rates is attenuated as output growth slows down. This can be reflected in the money market as a downwards shift in the demand for money curve from $D_{M_2}$ to $D_{M_3}$.

I presume that reduced investor confidence is a fairly standard problem to model, yet I'm not so sure about how I've done it.

I studied maths not economics so I won't comment on your graphs or theoretic models. In my experience as a rates trader, some economic models have their place but their inherent assumptions do not capture the practical market dynamics. I'll comment on the parts of your question I disagree with. Hopefully you appreciate a devil's advocate.

Firstly, a "a sovereign debt ratings downgrade" by a ratings agency has little value in the world today as a binary event. Most financial practitioners have made up their mind about the credit quality of issuers through independent or public research before ratings agencies update their databases. Ironically, one possibility is that this may indeed be a classic "sell the rumour, buy the fact" scenario, whereby reasonably large speculators sell the bonds preemptively, profit from general declining markets before the ratings downgrade and then use the liquidity and market wide focus generated by the event to exit their positions, and in fact the bonds may actually increase in value slightly due to this. This is classic Jessie Livermore style of trading (Reminiscences of a Stock Operator). There will doubtless be managed funds whose rules preclude investing in junk status bonds so demand for the bonds overall will likely decline overall although I expect more over a period than specifically because of that binary event.

The notion of "bonds" is a very broad term. If an issuer is downgraded the impact may be greater for various different maturities. The UK in the wake of the financial crisis was under considerable pressure due to its reliance on the financial sector and its government bonds underwent considerable re pricing, but the riskier, longer dated bonds suffered considerably worse that the much less riskier, shorted dated bonds, so in that scenario money market bill rates fell but longer bond rates rose.

When I think about the currency wide issue of money, if you have a reasonably large amount of sovereign debt held by investors that is sold those investors then have only a set of options available to them with respect to that money:

The first of these is just an asset reallocation and weakens sovereign bond prices relative to other assets in the economy. Your argument about government financing is true and the GDP output would be expected to decline, further as confidence also becomes a factor. The second would weaken the spot FX rate and the cross-currency basis swap levels. Indirectly this threatens to increase inflation since import prices will be affected by the currency movement. However, a weaker currency might tempt outside speculators at some equilibrium point. The third is difficult; no asset manager will deposit funds unprotected with a bank (particularly a domestic one) and the alternative of receiving back sovereign bond collateral is unappealing, so the repo rates will probably be increased in line with the rates on the bonds themselves, although this is another form of interest rate that does have significant impact and is not necessarily the same the bond rates. Indeed there will also be curvature to this as well.

As an example in 2017 the German government bond curve had 0-1Y yields at -70bps, and a repo rate often at similar levels. But the 20y-30y bond yields were at +100bps whilst the repo rate might be at -100bps. This may sound like arbitrage is possible, but it actually isn't - there is no scenario you can gain without running risk, and those different risks were considered and deemed to be worth the values potentially attainable by those who dared.

Finally I will point out to you the transmission mechanism. A central bank presides over its own currency and attempts to influence its economy by changing its deposit rate. However, a central bank is inherently connected to the government. I do not consider it wise to treat the two as separate entities. As a national bank, whose fortunes are intimately tied to the government, you would probably be better off buying and holding the sovereign debt if the short dated bonds offered considerably more interest than the central bank deposit rate, since from their point of view a government failure or a central bank failure might be one and the same. If you consider the holdings of Italian sovereign debt by Italian banks you will recognise this strategy as a kind of moral hazard. So the transmission mechanism is likely to remain in place for the short dated bonds and be ultimately tied to the deposit rate.

I appreciate there is no general conclusion to this thread, and some ideas are not necessarily coherent or consistent. I just found it an interesting question and thought I would explore my own thoughts in raw form. Possibly you find them useful.

What about framing your question in terms of the Mundell-Fleming model, which is an extension of the IS-LM framework for a small open economy? Or I would maybe suggest framing it in terms of the AS-AD model which does not assume the price level fixed and is useful to think about medium- to long-term effects on the economy?

Remember that in an “IS-LM” type of framework, the interest rate is set endogenously. A drop in investor confidence has an effect on the equilibrium interest rate via the IS curve (shifts on the left) only. Indeed as Attack68 has rightly pointed out, and which does apply quite well in such a setting:

Firstly, "a sovereign debt ratings downgrade" by a ratings agency has little value in the world today as a binary event.

I find the question interesting but I unfortunately do not have enough time to draft a nicer explanation. Anyhow, I hope that it helps and is somewhat clear.