Could leisure be considered a Giffen good?

One of my microeconomics fellow students asked this and it got me thinking. The leisure demand curve is a mirror of the labour supply curve. In the section where the Income Effect is greater than the Substitution Effect, would leisure be considered a Giffen good as well as an inferior good? Because the price of undertaking leisure is your wage.

I have two sources here:

EDIT:
From the link:

An increase in wages (say, from \$10/hour to \$11/hour) has two effects. It makes leisure more costly--each hour not worked means \$11 less income instead of \$10. That is an argument for working more hours at the higher salary. But at the same time, the increased wage means that the producer is wealthier--and is therefore inclined to consume more leisure. It is possible for the second effect to outweigh the first, in which case the increased wage causes a decrease in hours worked, as shown in Figure 5-4. This is called a backward-bending supply curve for labor; the backward-bending portion is from F to G (and presumably above G). The result, in the case of a single producer, would be a supply curve for goods that sloped in the wrong direction; for some range of goods, higher prices would generate less output instead of more. 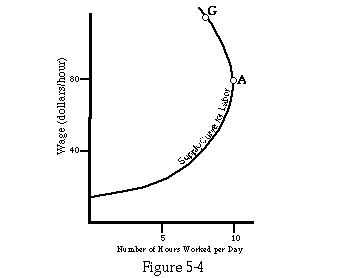 This is not the first time we have seen a conflict between income and substitution effects. In Chapter 3, the same situation generated a Giffen good--a good whose demand curve sloped in the wrong direction. I argued that there were good reasons not to expect to observe Giffen goods in real life. Those reasons do not apply to the backward-bending supply curve for labor.

One of the reasons was that while we expect consumption of most goods to go up when income goes up, a Giffen good must be a good whose consumption goes down with increasing income--an inferior good. Indeed, it must be so strongly inferior that the income effect of an increase in its price (which, since we are buying it, is equivalent to a decrease in real income) outweighs the substitution effect. Our labor is something we are selling, not buying; an increase in its price (the wage rate) makes us richer not poorer, and so inclined to buy more leisure. So the backward-bending supply curve for labor only requires leisure to be a normal good.

Suppose now that the wage someone receives goes up, (Diagram II). Obviously, this also increases the cost of leisure since the opportunity cost for not working is the wage you don’t get. So, since leisure has become more expensive, the worker increases his working time. This is the (negative) substitution effect. At the same time, there is also an income effect coming from the fact that since your wage increased, your whole wage income increased$^2$.Thus, the income effect will tempt the worker to increase his/her leisure. Be careful here: Leisure became more expensive but the income effect is positive. Remember that when we were talking about a normal good X, an increase in price would have caused both effects to be negative. I’ll explain this contradiction later.

An increase in the wage will cause the budget line to pivot upwards to the new position MoM1. The consumer now is on the new indifferent curve $I_1$. As you can see, he has both increased his leisure and his consumption! Let’s decompose this effect. The substitution effect will make the worker work more, $Q_0$ to $Q_2$. However, the income effect will push in the opposite direction, $Q_2$ to $Q_1$. Since the I.E. over weights the S.E., the consumer will increase his leisure. 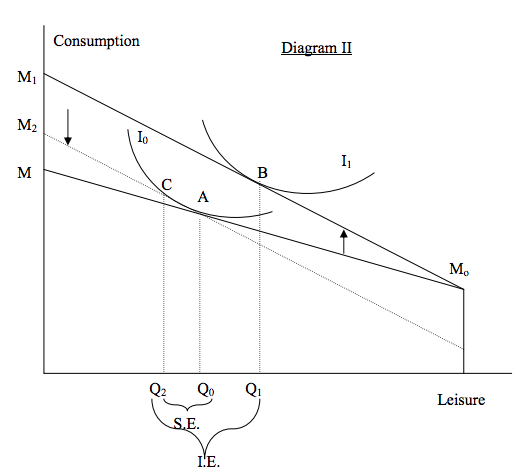 This worker’s reaction was actually determined by the IE, since the SE would always motivate the worker to work more. For a different worker, the IE could have acted in the same direction as the S.E. Clearly, this depends on where the indifference curves lie on the diagram, their shape (preferences) and the level of non wage income. Suppose a worker possesses a very significant source of non wage income. Obviously, he would react more smoothly in a wage increase than someone who relies solely on his wage income.

For a particular level of wage, a worker would be indifferent between working and not working at all. This wage is called reservation wage and depends on the level of the non wage income, keeping preferences constant.

Finally, few comments on the contradiction I mentioned before:

Now in X’s position we have Leisure, assuming that leisure is a normal good. If its price increases (increase in wage) then leisure becomes more expensive so the worker would want to consume less of it (work more). On the other hand the income effect motivates the worker to increase his/her leisure instead of reducing it (as it was the case with good X). Who is wrong here?

Apparently none! In the conventional model of goods X and Y we are concerned with people who consume the goods and do not sell those goods. In contrast, an individual not only consumes leisure but also “sells” it to an employer (in which case it is called work time). Thus when the price of leisure increases, it may become more expensive to consume but at the same time the consumer benefits from selling it at a higher price! Thus, the income effect can be either positive or negative depending on consumer’s preferences and particularly on how much leisure he sells in relation to how much he consumes.

In (2)[Diagram II] it seems that IE>SE but optimal choice of leisure is increasing. Seems that leisure is normal here.

First, let's define a Giffen Good. A Giffen good is a consumption good or service where demand increases as the price rises. That is, the price elasticity of demand ($\frac{\partial \ln (X)}{\partial \ln (P)}$) is positive. That's pretty unusual because normally raising the price of a good makes you poorer (which usually makes you demand less of everything) and by raising the relative price of that good you usually demand less of that good in particular.

Does any of this logic change with leisure? For hourly or commissioned workers, working more hours raises your salary (by $w$ per hour) and reduces your consumption of leisure ($\ell$ falls by $1$ per hour labor supply increases). In this setting, leisure is simply a good where the price the wage. What happens when the wage goes up 1% ($\frac{\partial \ln (\ell)}{\partial \ln (w)}$)?

If it is true that this is a Giffen good then there should be regions where labor supply falls with the wage. This hypothesis is the backward bending supply curve of labor. Intuitively, we know this effect cannot be very strong over lifetime income because we are 7x higher income per capita since 1870 (Kitov and Kitov) in the West but hours worked has fallen about 38% (Whaples) suggesting such an elasticity would have to be 0.063.

My impression is the profession is skeptical that this is an important effect in rich countries.

The "backward bending" supply curve of labor is now [n.b. circa 1973] accepted as a matter of course by most economists. It has no doubt been perplexing to observe that the most commonly employed types of utility functions do not yield such curves under the usual textbook analysis of the problem. Particular preference maps have been found that generate backward bending curves; however, they are nonparametric, leading to difficulties of estimation, and upon closer examination seem to imply counter-intuitive results. We will show that taking into account the wealth position of an individual on the one hand and survival consideration on the other greatly expands the variety of shapes that can be derived for the supply curve from some simple utility functions. The use of a specific simple utility function also implies some severe restrictions on the form the supply curve can take, rendering it test- able. Empirical evidence is shown to sup- port the conclusion that the supply curve is monotonic. We will also show that the notion that the aggregate supply curve of labor slopes down rests, in part, on an error of aggregation, and that the empirical evidence usually cited in support of the negative slope, when correctly interpreted, cannot be so construed.

Assets, Subsistence, and The Supply Curve of Labor AER, Barzel and McDonald (1973)

Evidence may be stronger for a backward bending labor supply in subsistence circumstances:

According to the textbook model poor people would work least. In practice, the opposite is often observed in less industrialized countries, but also in wealthier countries especially during economic downturns. People in impoverished circumstances appear to be working longer hours as wages fall to maintain income constant; they display a negative labor supply elasticity. These observations, however, have been somewhat of an embarrassment for the neo-classical theory, which contends that labor supply elasticities are usually positive when people respond to economic opportunities. That evidence has therefore tended to be dismissed in the literature as resulting from “irrationality” (culture of poverty), or from limited consumption opportunities (quantity constraint), in short, as being an exotic curiosity of “backward” regions.

23
What are Giffen Goods?

0
Why is the social value curve NOT the supply curve shifted downwards?
5
Does a Robinson Crusoe economy have a substitution effect and an income effect?
0
Trying to show result of prisoners dilemma simulation through supply/demand graph
2
A question of deriving an industry supply curve from cobb-douglass production function
4
Labour Market: simple macroeconomic modeling
2
Difference between Giffen and inferior goods. Why aren't all inferior goods Giffen goods?
0
Why is the labour supply independent of the wage in this case?
1
Reason behind the decomposition of price effect into substitution and income effects
1
Without knowing the Slutsky equation and income/substitution effect, how can I show a certain good is inferior or Giffen?