I have heard constant complaints, particularly from teachers, that (United States) schools are underfunded, and that budget cuts only stand to exacerbate this problem. My own high school couldn't even afford a library.

Nevertheless, it seems that in inflation-adjusted dollars, school funding has only increased—and greatly at that. We see charts like this: 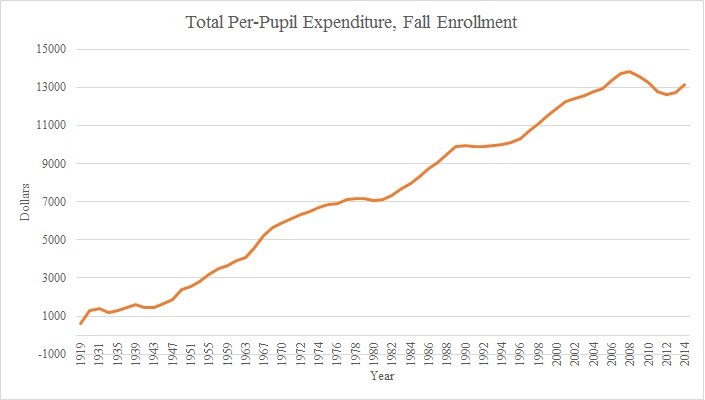 We can point to the last section of the chart and call it a funding cut, but this hardly seems significant given the overall trend.

I initially was going to ask about this disparity, but further research turned up a plausible explanation: the rising cost of education.

In this graph, we see that the cost from 1970 to 2010 has basically tripled (while from the previous graph in the same time the expenditure has only doubled). This would explain why schools complain about being underfunded.

However, this itself seems like a problem. Both these charts are inflation-adjusted. We clearly see that education cost is rapidly outpacing inflation.

Why should this be? It doesn't seem that we're educating better for that higher cost. As you can see (also on that chart), student achievement in reading and math is basically the same, and science has actually declined a little.

Here I haven't been able to find clear answers. Is it additional administrators increasing costs? Are the benchmarks we're using to measure achievement changing, so that it only looks like educational effectiveness is constant? Are we spending more on technology for no good reason? Are my sources just wrong?

Note: this could fit on politics or academia.stackexchange as well. I'm asking here because I'm interested in the underlying economic explanation, before I get to policy or practical matters.

Browse other questions tagged education-economics united-states or ask your own question.

26
How do Gini coefficients correlate with the cost of higher education?
3
Correlation and Causality: Data comparison of educational spending and GDP growth
0
Income Elasticity of Demand for Higher Education
1
Global Education Indicators - dataset
3
Pricing Education
3
Is there any work on equality in a market versus friction?
1
Education Spending Ratio