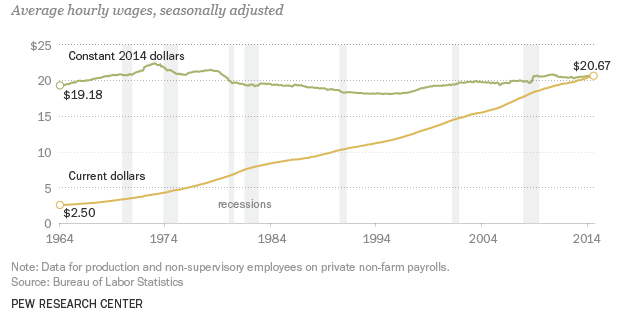 The reasons for this are many and varied. 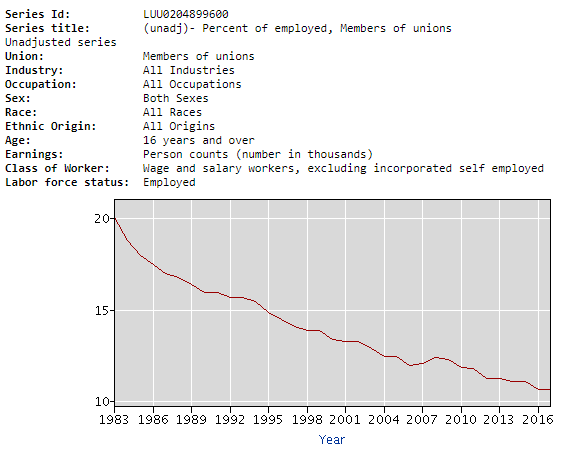 (source: data roundup via https://www.bls.gov/news.release/union2.nr0.htm with the same chart in a more accessible article at https://www.bloomberg.com/news/articles/2018-01-19/union-membership-rate-in-u-s-held-at-record-low-of-10-7-in-17 ).

The reasons for this too are many and varied.

I think the causal relationship between the two is weak, but I'm wondering if there has been any research on whether or not there is a relationship, and to what degree.

Repeated, in question form: What is the relationship, if any, between declining union membership and real wage stagnation? Thank you.

The UK has a report on union membership: https://www.gov.uk/government/statistics/trade-union-statistics-2016 . One table lists "Trade union membership, UK, 1892 to 2015-16" in absolute terms; the series counting percent of employees only starts in 1989. But it shows that absolute membership peaked in 1979 and has been declining since. 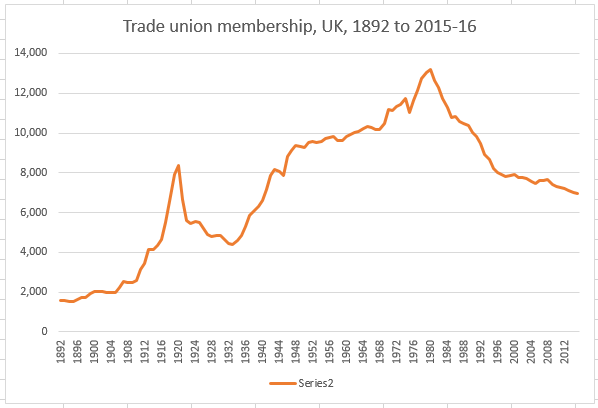 In contrast with the United States, ever since the (absolute) union membership peak in 1979, real wages have increased in the UK (actually shown is since 1980), although they did take a dip after 2008. 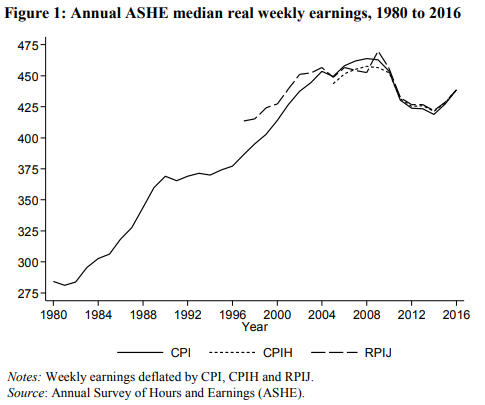 (source: "Real Wages and Living Standards in the UK" )

My understanding is that theories and empirical methodologies demonstrating the relationship between declining union membership and wages risk overestimating the causality of the relationship.

Anyone who argues that businesses do NOT, in a relevant share of cases, endeavour to suppress union formation, activities or recruitment, whether individually or collectively, is either ignorant or a political shill. (Things are not nice 100% of the time in the other direction either.) This should be recognized, in order to proceed with rational discussion of the economics of the issue.

However, factors like increased international competition in lower-skilled jobs from a very large international labour pool (which is much more accessible to producers than in 1950 or 1980) can be one reason that the causality of declining union membership can be overestimated.

Also, mechanisms of tacit collusion between businesses can act to hold down wages as well, for example with various agreements which prevent an employee from working for a competitor for some number of years after they leave (e.g., Google and Apple could both force employees to sign such an agreement as a condition of employment, thus holding down wages for both firms, which both account for a substantial share of employment in their specific areas of activity). This could be another explanation for some portion of wage stagnation that would be difficult to frame as resulting from declining union membership per se.

Between 1) international competition and 2) a proliferation of methods to suppress wages unrelated to union formation or membership per se, it should suffice to say that significant effort for robustness must be demonstrated before any empirical work can be taken seriously when discussing causality between declining union membership and 50 years of stagnant average wages.

The risk, then, is that an inadequate methodology which involves a) under-specification of a model, and/or which b) includes inadequate robustness checks, could indicate that declining union membership caused stagnant wages, when theoretically this could be a false positive when other factors explain both the declining union membership and also stagnant average wages.

The direct correlation is tricky.

Reason 1: Employees in the union have significantly higher wages than those not in a union. There is not really any debate about this. But...

Reason 2: Employees without a union in the vicinity of an employer which allows/has a union sees a significant decrease in their overall income.

So, overall it may have no net effect.

I hope this helps!

Not the answer you're looking for? Browse other questions tagged wages united-states or ask your own question.

5
why is real wage divided by marginal product of labor often called real marginal cost?
3
Wage regressions: Nominal versus real wage
5
Minimum wage vs wage subsdies
3
Who really benefits from economic growth?
11
Productivity vs real earnings in the US — what happened ca 1974?
5
Has US real median personal/household income been stagnant since the late 1970's/early 1980's?
2
How is real wage growth achieved?
36
Did real incomes drop significantly since the 1950s?