Why does capital initially reduce and then rise with an anticipated future decrease in taxes in the RCK model?

Consider the version of the RCK model where there is a government that runs a constant balanced budget.

Draw a graph of changes in the phase diagram that characterizes the dynamics of the economy, and heuristic graphs of the time paths of the following variables:

The memo gave the following: 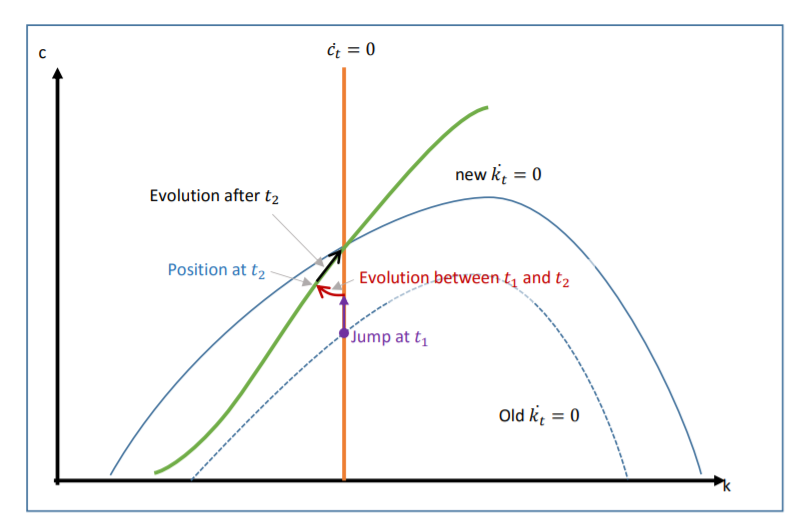 Why do the time paths of capital and the real interest rate look like that?

When the economy transitions between time $t_1$ and $t_2$ (the red line in the phase diagram), capital reduces (because of the leftwards movement). That is why the green line showing the path of capital over time goes down initially. Because capital reduces, the marginal product of capital increases (as seen by $r$ increasing in the time path between $t_1$ and $t_2$.

Then, the economy is on the saddle path, and gradually returns to the new balanced growth path, which is a point with the permanently lower tax rate (and thus permanently higher consumption spending). When this gradual change happens (shown as the black arrow in the phase diagram), capital increases (movement to the right), so in the time path, the green line goes back up to the initial level. Because capital returns to its initial level, the return on capital also decreases to its initial level.

Consumption initially jumps up because disposable income over time is discounted, according to the formula $$\int_{t=t_1}^\infty e^{-R(t)}(W(t) - T(t)) \mathrm dt $$ where $R$ is the discount factor, $W$ is the wage and $T$ is tax, so even though disposable income doesn't decrease immediately, the anticipated decrease in the future affects current consumption. Other than that, the anticipated permanent change in government spending puts consumers on the new saddle path.

Not the answer you're looking for? Browse other questions tagged macroeconomics consumption government-spending balanced-growth or ask your own question.

1
What happens to effective consumption and capital in the Ramsey/Cass-Koopmans(RCK) model when technological growth decreases?
1
Why does decrease in fixed taxes accompanied by a decrease in Government Spending of the same amount will decrease GDP?
3
Effect in the Ramsey model of a decrease in population growth
0
Why the GDP does not decrease even when we are saving from our income?
1
Income gap in Ramsey model
2
Why are we using exp(.) as the functional form in the household maximization problem inside the RCK model?
7
Is there empirical evidence on usability of Cobb-Douglas production function?
0
Why does the aggregate consumer spending decrease due to to lower expected future disposable income instead of MPC?
2
Why does a rise in the savings rate result in an increase in the capital stock intuitively?