Edward Luttwak published an essay in 1994, titled Why Facism is the Wave of the Future; he wrote in this essay:

and partly because computer networks allow managers at the next level up literally to oversee, right on their own screens, the work that their underlings are doing or not doing, thereby giving it the same transparency as assembly-line work, with the same immediate visibility of inefficient procedures, inefficient habits and inefficient employees – for all these reasons the long-awaited, long-delayed increase in the efficiency of office-work has finally arrived, exposing hitherto more secure white-collar workers to the work-place dislocations, mass firings or at least diminishing employment prospects that have long been the lot of blue-collar industrial workers in mature economies.

I've heard the term 'precariat' banded about a bit in the UK for the past few years, which sort of tallies with this projection; but can firmer figures be put on this phenomenon?

the long-awaited, long-delayed increase in the efficiency of office-work has finally arrived

Actually, so far opposite has turn out to be true. The article was written in nineties, in time of boom of productivity. Contrary to expectations, technological advances did not bring higher efficiency of work. As a matter of fact, the productivity has stagnated, as shown in the data below (note that the chart presents all nonfarm labour, including services, office support, admin., etc.).

Not only software did not boost the office productivity, it is also one of the major factors of the stagnation - after all there are more distractions than ever in today’s workplace (social media, online games, etc.).

It seems that software designed to monitor employee productivity is not widely used. There are lots of time management apps (like TimeDoctor or WorkIQ, to name the few), budgeting apps, workflow apps, but it cannot be said that they expose 'white-collar workers to the work-place dislocations, mass firings or at least diminishing employment prospects'.

With that being said, there are plenty of white-collar occupations that can be completely automated (for example bank tellers, bookkeepers, basically all the white collar jobs that include collecting and processing data), but that’s another issue. This is one of the main factors why employment in services in US, understood as % of total employment, never went back to the levels prior to the crisis of 2008. 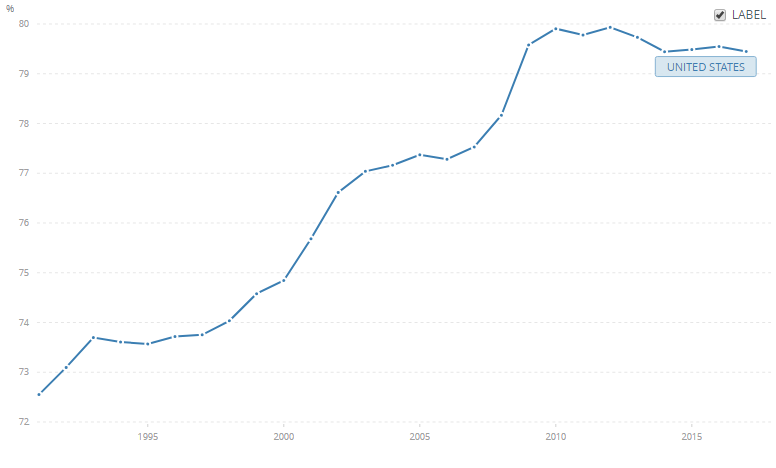 Precariat is something different, but related to the loss of job and overall lack of security in life. It was highly used in public debate amids of the crisis in eurozone (you can read one viewpoint from Guy Standing, who popularized the term).

** As a side note, I used U.S. data, since USA is deemed to be pioneer in technological advances in services, but Japan would be another interesting example.

Not the answer you're looking for? Browse other questions tagged political-economy or ask your own question.

13
What happens if the "control variables" are also endogenous?
7
Are state owned enterprises really inefficient?
3
What is the loss of productivity of not using the international system of measurments (SI)
1
What have been some trade-offs that the U.S. has made?
4
What are the factors that drive openness in developed vs developing countries
3
How many major economic systems are there?
2
What are the Economic reasons and explanations to make a referendum?
3
What are the logistic implications of using bottle caps as currency?
1
What was the Summers memo of 1991 sarcastic about?