Oscar Tabarez, the current football manager of Uruguay National Team, have urged, after his good results, his governement to raise, as promised, the Education Spending on GDP Ratio to 6%.

It is a very good resolution indeed and it makes me looking how my country, France, is ranked. Someone, could help to understand why France (i'm french) has a low level in comparison with Mexico, Brazil or Argentina and is one of the last country of OECD.

Are we more efficient with Public Expenditure ?

It is large issue but any comments will help me.

My work focuses on the Economics of Education, although from a more micro perspective. I can honestly say it's a complicated question and there are many people working on optimal education spending.

First, a bit of simple math. Let $EdExp$ be education expenditure, $GDP$ be Gross Domestic Product, $E_{students}$ be enrolled students, $S_{pop}$ be school-age population, $N_{pop}$ be non-school age population. One can decompose Education Expenditure by GDP ratio in this way:

Note this isn't a "made-up formula", it's an accounting identity. This is true in the US, China and in a tribe of herdsmen. I'll translate its terms to english. $\frac{EdExp}{GDP}$ is Education Spending to GDP ratio, which Tabarez thinks should be 6%. $\frac{E_{students}}{S_{pop}}$ is the enrollment rate, the fraction of people who are school-aged and attend school. $\frac{S_{pop}}{(S_{pop}+N_{pop})}$ is the dependency ratio, the fraction of the population that is school aged. Lastly, $\frac{EdExp}{E_{students}} \times \frac{(S_{pop}+N_{pop})}{GDP}$ is education expenditure per student divided by GDP per capita. This is the proportion of average income that is spent on the average student.

Countries like France have high GDP per capita and low dependency ratios, which means they can sustain high expenditure per student without having to compromise a large share of GDP on education. Uruguay and Brazil, on the other hand, have high dependency ratios and somewhat low GDP per capita. Enrollment rate isn't very high too. So, in order for these countries to sustain high expenditure per student (which is what ultimately counts), they need to reserve a larger share of GDP for education.

That's one part, the one having to do with demography and aggregate spending. I'd like to talk about the one some of my research is concerned with, spending efficiency. Uruguay is not an extreme case as Brazil, but it shares many problems with its northern neighbor.

Out of the ~6.5% of GDP that Brazil spends in education, only about 1% goes to public fundamental/elementary schools. About 1% goes to public high schools and the rest goes to public universities. This is just terrible. You can't spend 2% of GDP on dozens of millions of students and then 4% on 1 million of them and expect the first system to have reasonable quality. Then, we have the institutional problems. In most states, schools aren't allowed to pay bonuses to better teachers and many poor municipalities can't even hire trained teachers because of low pay, depending on self-taught locals to teach. Access to federal resources such as financing for new materials and data to better understand your school's demands is somewhat easy but mostly untrained, unqualified school managers don't know what to do with these resources.

In the cities and school that do have somewhat qualified personel and more money, public tenure rules in Brazil make it impossible to fire low productivity teachers and managers and even promote the good ones. Leading to overall lack of incentives.

On one hand, spending matters. It's hard to imagine schools giving good education if there aren't blackbords, chairs and basic equipment in it. On the other hand, poor institutional design and lack of incentives can make tons of money go to waste.

As a rule of thumb, anything in the 4-5% education spending to GDP ratio is reasonable. More than that means mostly resources going to waste if there aren't serious attempts to create better incentives and improve school management.

As a richer country, with higher GDP, France simply spends more and for more years in education, which yields higher results.

Using your source, which can display the expenditure in % of GDP or in USD/Student, you can see that the higher levels of Mexico actually translate into 3.000 USD per student, while france spends 10k per student. 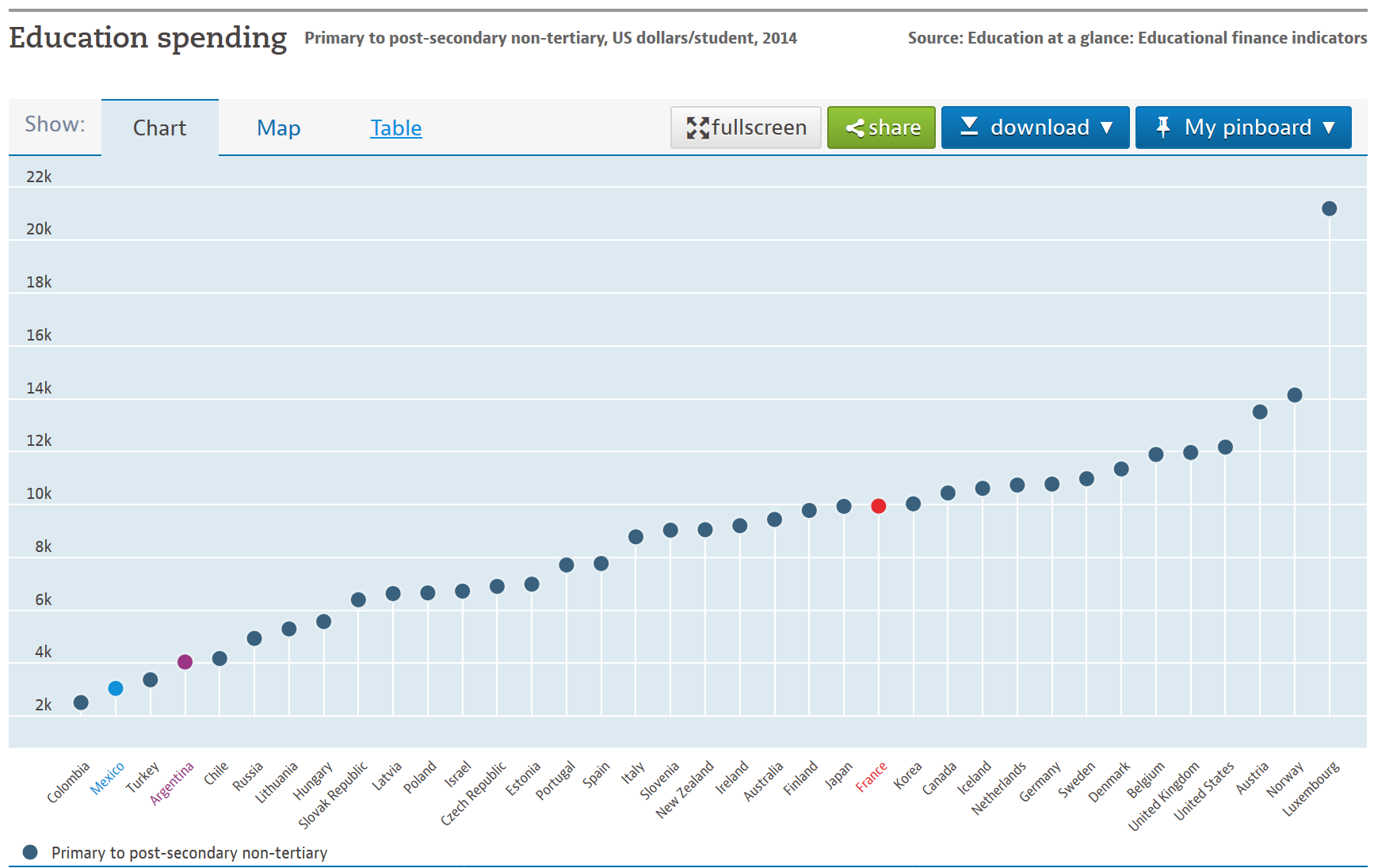 Another way to look at it is to see the education expenditure as % of GDP per capita, and seeing it over the years. It demonstrates how France has maintained its expenditure higher than the other countries you mentioned. 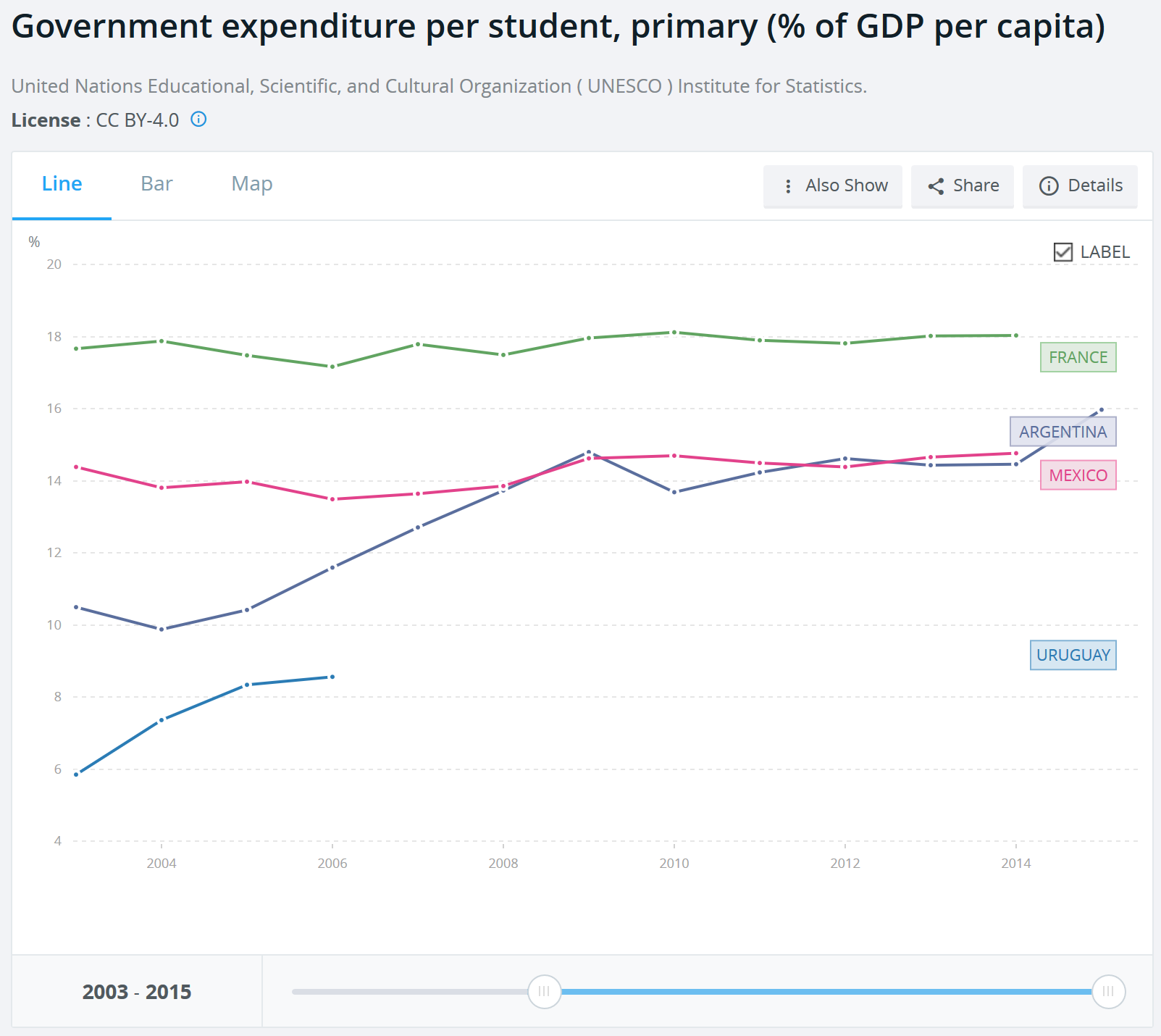 And all of this goes on top of the factors mentioned by Pedro in the other answer, such as different demographics and dependency rates.

None of this seems to be related with efficiency of public expenditure.

Not the answer you're looking for? Browse other questions tagged education-economics or ask your own question.

4
Is education a part of the U.S. exports component of GDP?
0
Income Elasticity of Demand for Higher Education
1
Global Education Indicators - dataset
3
Pricing Education
5
Why is everyone suggested to specialize their education?
3
Does mathematical education imply a better salary?
3
Does education have any value for most people's work?