Under what conditions is a monopoly undesirable?

First of all, I realize that "undesirable" is an ambiguous term. So, to clarify, when is a monopoly undesirable under the following metrics?

Are there any criteria that I'm missing? Also, if we take into account potential general equilibrium effects (like the effect on wages), does the analysis change?

Firstly, suppose we take a utilitarian welfare standard that is linear in money. That is to say, suppose that both utility and profits are linear in the amount of money that consumers and firms have (but not necessarily linear in anything else). In that case, the Pareto standard and the utilitarian social welfare criterion coincide exactly! You can see a nice video of Jeff Ely talking about the intuition for this result here (look at the video titled "efficiency"). Intuitively, if both the utility and profits are linear in money then we can always maximise utilitarian welfare by implementing the Pareto optimum and then constructing side-payments to support it.

Now, the answer to the question of when a monopolist is undesirable depends on the richness of the model that one has in mind. In a very basic textbook model of a monopolist, FooBar's criterion is a good one. We know that an ordinary competitive market equilibrium maximises total welfare (the shaded area in the below figure) with price equal to marginal cost (n.b. the supply curve and the marginal cost curve are essentially the same thing): 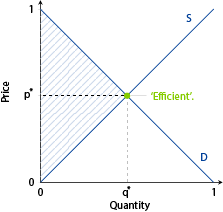 Since the profit that a monopolist makes from a unit is equal to difference between its price and its marginal cost, the monopolist will tend to set price above marginal cost. This results in a higher price (the green $p$) and a reduction in total welfare (given by the shaded area in this figure) and consumer surplus (the triangle between the price line and the demand curve): 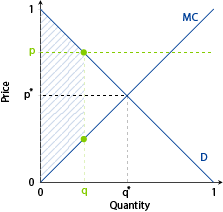 Since this kind of analysis is standard, it makes sense to think of the case in which a monopolist reduces consumer surplus and welfare as being a kind of 'default' and instead ask "when might a monopolist be desirable"? Here are some situations in which having a monopolist might be better than having very intense competition:

Those are a few of the most common ways in which a monopolist might be preferable to competition. I am sure there are others that don't come to mind right now. The main message is that you have to look at the specific market context to evaluate whether there might be any problems associated with intense competition. Most often the answer will be that there are not, and the usual assumption is therefore that monopolists are undesirable unless we have good reason to think otherwise.

First of all, a monopoly literally means that we have a single firm in one market. As economists, we do not really care about the number of firms in a market per se.

However, the firm being single means it gets market power. And this is where problems arise. It will, under no regulation, take the demand curve (for buyers of his good) and the supply curve (for intermediate goods it uses) as given and extract rent from both ends.

This directly implies that consumer surplus is reduced, since under typical assumptions the monopoly will supply a smaller quantity at a higher price.

For Social Welfare, note that free markets with imperfect competition typically yield inefficient outcomes, that is adding up consumer surplus and producer surplus gives you a smaller sum than in the economy with no market power.

Finally, Pareto Efficiency is somewhat irrelevant to the market power, as long as market power comes with the ability of perfect discrimination (see the comment). It is relevant for the type of economy, where I have assumed free markets throughout this answer. Under free markets, if there was any resource "free for grabs", someone would have taken it. Hence, the extent of market power does not affect Pareto-efficiency, the general existence of markets and their potential regulation does.

Addendum: Note that I have assumed free markets (zero regulation by governments) throughout the answer. If the government was to enforce by law the optimal outcome, the amount of market power becomes irrelevant to both consumer surplus and social welfare in general. It could do this for example by forcing the monopoly to supply the optimal quantity of goods, or creating a subsidy which would incentivize the firm to supply exactly that quantity.

Under perfect competition, the producer faces a "demand curve" that consists of a single point; where price equals marginal costs. This party then has to produce and sell at the "going" price dictated by the market (or not at all), in order to remain in business.

In a monopoly situation, the producer faces the WHOLE demand curve (which is basically the definition of a monopoly). This means that the producer can produce anywhere along the demand curve that s/he wants, not just at a market-determined price. This allows the monopolist to appropriate some of the consumer surplus. "Price discrimination" is another possibility, if the monopolist is allowed to charge different prices in in different markets (based on "local" sensitivities).

Not the answer you're looking for? Browse other questions tagged labor-economics industrial-organisation welfare-economics or ask your own question.

2
What Is Social Security Invested In?
9
Are obstructed views a negative externality?
0
What is a good way te represent analytically two markets with different price elasticities of demand?
0
Understanding the elasticity of demand for a monopoly
2
Clarification about demand elasticity and monopoly
4
General equilibrium effects of affirmative action policies
1
What is an Economic Sector?
0
Could a “Japanese-style strike” work as it's supposed to? Under what conditions?
0
How to graph a monopoly that does not exhibit the properties of a contestable market?