How can countries be in so much debt?

You regularly hear in the media how countries are billions or even trillions of US dollars in debt. How does a country get so far in debt, and who is it in debt to? How can countries of the world operate owing such vast amounts of money? 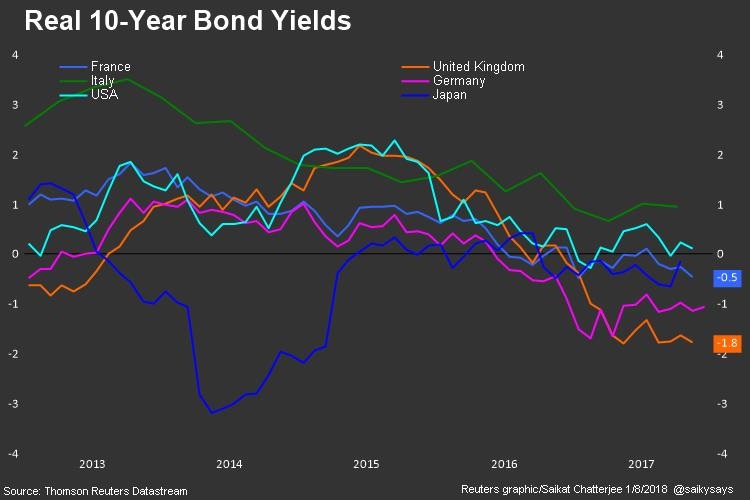 Negative real borrowing costs add fuel to markets that are already on fire, limiting the downward pressure on bonds, keeping corporate spreads on the tight side and pushing stocks to new high after new high. [...]

For investors, it’s a chicken and egg scenario. They’re crying out for policy “normalization” - higher rates and less central bank “interference” in markets - but are enjoying the asset price boom that’s in large part a direct consequence of central bank largesse.

E.g. news from July this year:

Greece is scheduled to end nearly a decade of external help this August, after implementing more than 400 policy measures demanded by creditors. The yield on the 10-year government bond has fallen about 30 basis points in the wake of the recent debt deal. It moved from standing at about 4.2 percent to 3.9 percent. In contrast, Italy’s 10-year yield currently stands at 2.668 percent and the U.S.’ at 2.85 percent.

5
Learning about Debt and Credit
3
Why does nation's total debt matter and not NIIP?
4
How much of Greece's public debt is created by its trade deficit?
9
What happens to a country with lot of debt?
3
When Does a Country's External Debt Become a Problem?
1
Is it possible to pay the internal debt of the country and to cover the budget deficit by increasing taxes?
2
Is it possible to repay the world debt? If not, why do we care?
1
Why does the United States' national debt matter?