This recent question about when monopoly is undesirable made me curious about when monopoly is actually desirable? I was reminded of an argument for the efficiency of monopolies when moral hazard effects create a backward-bending supply curve in competition, like in healthcare perhaps. But, for the life of me, I cannot remember exactly how this was justified or if I am just imagining the whole thing. Is anyone familiar with arguments like this?

Information is a funny thing, so I wouldn't be surprised if incomplete information made for strange results.

Edit: I am thinking of pictures like these. I am just having a hard time reconstructing the jump from a backwards bending supply or demand curve (I understand these--this is often taught in 101), I just don't understand the MB/MC interpretation below where it seems like you might get a higher equilibrium quantity with monopsony or monopoly. 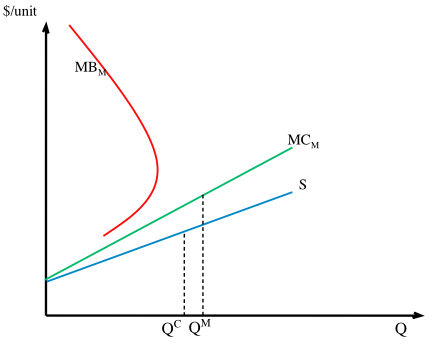 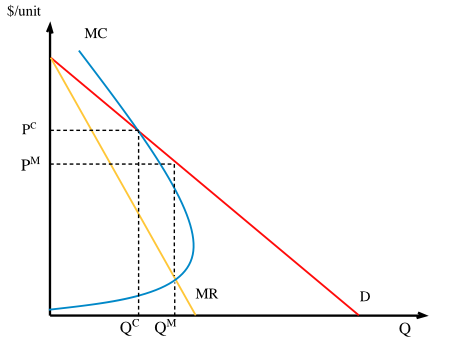 For these to make sense, MC and MB can't be functions of quantity unless I have a marginal cost in each direction? As in I could sell $q_1$ at a high price a low price, so am I approaching from above or below.

Example: think about commercial aircraft industry, dominated by Boeing and Airbus. Aircraft industry is seen as exhibiting increasing returns to scale, so monopolistic power those companies have (well, it is oligopoly, but that does not change the conclusion) may actually lead to cheaper quality aircraft.

Now there are people who really believe that all monopolistic powers are undesirable, but I believe those people are only minorities.

I haven't seen the model you mention (so this answer should be taken with a grain of salt!) but, intuitively, I guess the story would go something like this:

Suppose a firm is selling insurance.

Thus, supply first increases and then decreases with price.

I don't recognize your moral hazard example, but there are a couple situations where a monopoly is desirable.

A monopoly is desirable when the cost of entry is close to zero or good substitutes are available, and the economies of scale are always increasing. One might argue that Amazon.com, Google, and other internet companies are cases of this. The advantage of being able to always go to the same source for everything makes the economies of scale high.

A monopoly is also desirable when the economies of scale are such that it is cheaper to pay the monopoly premium than to split between two producers. The classic case of this is with law enforcement. The cost of covering one more house on a street decreases as you cover more houses. The cheapest price is reached when one agency covers every house on the street. This would also apply to fire and ambulance services for the same reason.

Of course, if it is worth paying the monopoly premium, then it is generally worth paying the central planning penalty as well. Thus most of these services tend to be provided by governments rather than private enterprises. Even when they are provided by private enterprise, as gas, electric, cable, and phone connectivity are, they are often highly regulated as utilities.

Patents and copyrights award temporary monopolies to encourage production. Ideally the societal benefit of increased effort should outweigh the monopoly penalties. Of course, we can likely find individual instances where this is untrue.

Trademarks offer a relatively permanent monopoly to encourage brand building and responsibility. Without trademarks, the name wouldn't indicate who was providing the good or service, so determining quality would be more difficult. The trademark loses value if it becomes associated with lower quality, so the trademark owner is incented to maintain quality. Hopefully we wouldn't offer them unless the benefit outweighed the cost.

A "backward bending" supply curve is evidence of a a supplier "monopoly." An example of such is a labor union, that has a "monopoly" on labor in a region, meaning that no one else can produce widgets for the monopolist; just as the widget producer is a monopolist because it has no competitors.

Normally, monopolies are frowned upon, because they have "too much" power, relative to other agents. On the other hand, if you have a "monopoly" that can move anywhere along the demand curve at will, and a labor "monopoly" that can confront the whole supply curve, maybe you have two operators with "countervailing" power that balance each other out.

Not the answer you're looking for? Browse other questions tagged information monopoly asymmetric-information or ask your own question.

11
Under what conditions is a monopoly undesirable?

1
How does the monopoly's deadweight loss affect market surplus and the economic pie?
2
Why is AC = MC in the monopoly?
7
Why don't consumers subsidize monopolies?
3
Effect of a subsidy on a monopoly
2
Asymmetric information assumption
0
Numerical Question on a subsidized monopoly
7
Robust asymmetric information?
1
Why there is no supply on monopoly markets?
1
Will there always be excess profit in the Cournot model equilibrium/monopoly