Empirical explanation on divergence between productivity and wages since the 70s

There is a well know graph, that shows a tight link between productivity and wages, until the 70s, and a break of the link since: 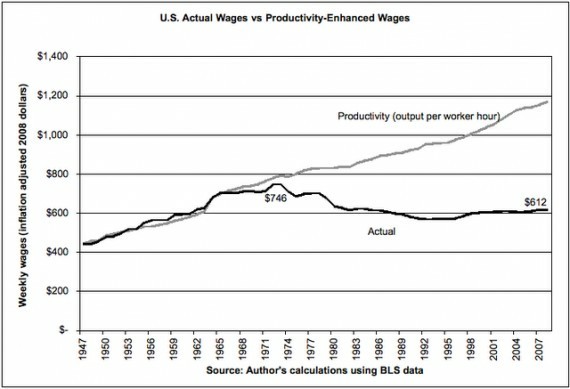 There's a lot of possible explanations for this, I keep hearing more of them:

There is a good article here

I actually thought of a possible reason myself: the decrease of competitiveness of the labor market as a result of mergers and acquisitions or the drop in power of labour unions, as said

This is sort of my field, tough I focus more on education. One explanation that seems to fit the data is that the american labor market now is incorporating benefits and variable pay, so wages should decouple from productivity if total compensation doesn't - and voi lá, that's whats happening.

One reason, perhaps, is that the character of the productivity acceleration changed circa 2000. Prior to that date, studies have suggested that the more important effect was an increasing ratio of capital to labor (capital deepening) as businesses substituted relatively less expensive information technology and communication equipment for labor. Since 2000, some studies suggest that the more important factor has been a re-engineering of business practices, which has increased the “skill bias” in the labor market, that is, the premium paid for higher levels of technical, professional, and managerial education and experience. For employers, variable pay solves, in part, the problem of monitoring the performance of such workers: Unlike traditional factory and retail service workers, whose hours at work are relatively easily monitored, many skilled professionals work at varied locations and times of day. Finally, increasing reliance on variable pay also perhaps is a type of risksharing arrangement between businesses and workers. If the recent productivity trend slows, reducing or curtailing variable pay may be less offensive to professional workers than reductions in base salaries. 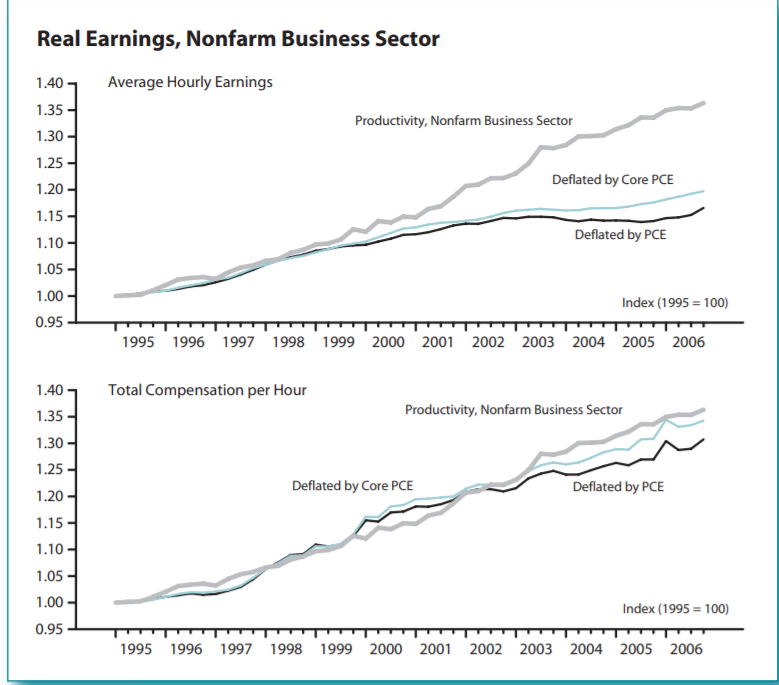 I doubt that there is data which thoroughly decouples the set of possible explanations (some of which you listed in your question). Many of these factors are so interrelated that attempting to decouple them in order to identify "the one root-cause" seems futile.

This circular dynamic illustrates some of these interrelations:

Similar chains of reasoning can be developed if instead of technology one takes globalization or a fiscal/financial cojuncture as starting point. Either way, economic agents will seek to maximize profits, which in an open economy can only be attained by competition and innovation. That inevitably leads to lower wages and higher productivity, respectively.

An economist's efforts to solve this chicken-and-egg dilemma would be uninteresting, more so where other real and emerging problems are not even marginally captured in the aforementioned circular dynamics.

Although there has been so much outcry about wage stagnation in the U.S. (and other countries), no one can reasonably refute that even with today's "stagnated wages" people in these economies have access to many more goods and services than with the growing wages in the first decades following World War II.

Not the answer you're looking for? Browse other questions tagged labor-economics wages productivity empirical-evidence or ask your own question.

6
Gali and van Rens: The Vanishing Procyclicality of Labor Productivity
3
Why the difference in productivity and wage trend in the UK economy?
1
Has worker productivity decreased since the election of Donald Trump?
0
Link between Productivity and Labour Force?
1
Marginal productivity, wages, and profits in neoclassical economics
1
Productivity and wages in a task-based model
0
The relationship between profit and wages
0
Is there contradiction between automation created resilience and the full employment (with high wages)?
1
The CORE team's writings about labour productivity, real wages, markup and the price-setting curve