Can a bank use its excess reserves to purchase stocks? If so, does this inflate the cost of borrowing for your average Joe since he has to offer returns (interest payments) that are competitive with stock market returns? Or, on the other hand, maybe a personal loan with collateral is competitive when you consider the low risk?

1st of all, banking regulation in different, in various countries, so there is no 1 accurate answer for all cases.

Having that said, In general, banks may buy stocks, but that won't be with any capital being held as a deposit reserve ratio, or Basel regulation recommendations. This is because a bank has to keep enough capital allocated per loan. Furthermore, when a bank recruits capital in order to lend it, it becomes its own debt, rather than capital. The bank lending money is its asset, which should be alternative to stock buying

When a bank buys a stock, its done from it Nostro account, dedicated for investments and is seperate from its "classic" activity

Of course diversions from the theoretical model do exist, in cases like the Sub-prime bubble of 2008. but, obviously,the large banks back then, in fully aware manner, broke their own business model rules, in a fraudulent way

Can a bank use its excess reserves to purchase stocks?

Central banks do buy private assets, in particular, equities, but also corporate bonds as well. What is the extent of it? Potential implications to the economy? overall economic system? moral hazard issues?

For over 8 years as of 2017 at least, central banks have been buying immense sums of sovereign bonds, corporate bonds and equities either directly like the Swiss Central Bank has been buying Apple and Amazon. Bank of Japan has been making huge purchases of ETFs, Exchange Traded Funds which is unprecedented in a non-crisis situation.

One study claimed upwards of $2 trillion in assets have been purchased by central banks around the world.

Central banks are funding corporations via buying directly from the issuer, the corporation. That's different than how its done normally.

At the marketplace they would have to compete, so central banks are overstepping the market by buying directly from corporations.

So yes that leads to distortions of valuations and price discovery and risk to name a few I can remember right now.

Are they not then picking winners and losers is a question that has been asked.

The central bank balance sheet has all the FANG stocks, Facebook, Apple, Netflix and Google. This is distorting the market.

The market is based on transparent information being available.

When there is information asymmetry, its considered illegal. The market requires a free flow of information if its going to have the necessary foundation for price discovery, risk assessment and so on.

So by continuing this behavior the banks are robbing the market of information and when you do that, then you've crippled all the other participants from being able to make an accurate assessment.

When you strip out information from the market it makes it more fragile and more unstable, its no longer an open market, but intentionally favoring a few large cap stocks.

Planned protection buying in a crisis is acceptable, but this has been going on in a recovery, answering why that is would be just speculation on my part.

So more to the point of the second part of your question regarding the average Joe.

For Generation Xers like myself and Millennials, our income is lagging, much higher student loan debt. So I have a zero funded IRA, despite being frugal.

Generation Xers and Millennials do not have any money to buy equities and Baby Boomers are starting to draw on pension funds. Who is going to fund the retirees? My generation certainly cannot and neither can Millennials.

Japanese central bank already owns 30% of the entire Japanese equities market as of summer of 2017. Thats a significant percentage, what happens when it goes to 50% or higher? How will that affect the average Joe in Japan?

This behavior is raising the risk in the equities market. What is the consequence of that in a crisis situation? More buying by central banks in a market crash? What if central banks start selling? That in itself would create a crisis because they are now a buyer of size. 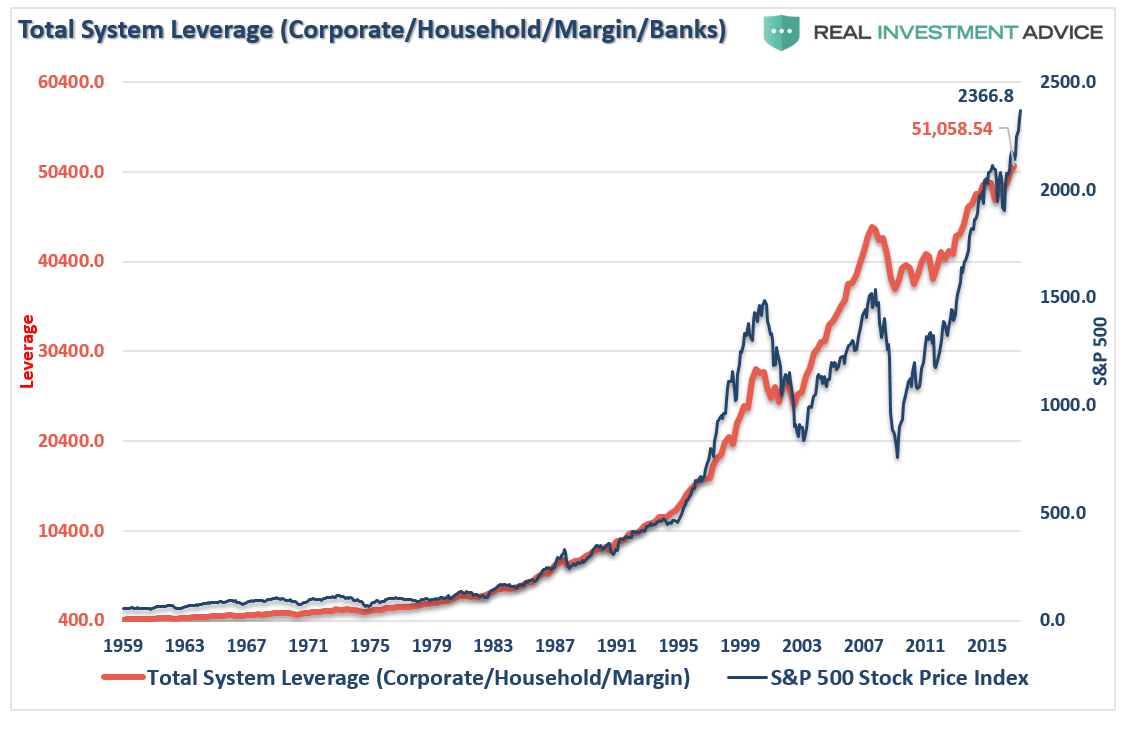 Central banks have generated a tremendous increase in total financial system leverage (credit/liquidity) and yet GDP has been in a downtrend since I was in elementary school.

In general, this creates a widening divide between the sales/profits and productivity economy that the average Joe exists in and the stock market.

If you observe carefully, the narrative of our healthy economy is no longer how many jobs are being created or how many average joes bought homes and so on. Instead, you hear everyone is doing great, just look at that stock market, obviously the stock market doing great is not representative of our incomes because we don't own equities of any real significance, at least I don't.

In the long run however, the stock market will lose its signaling capacity as more and more people are becoming aware of the contrast between what the stock market signals and what the real-economy is displaying. Eventually that leads to a loss of trust in the idea that a market is an open, transparent market. If that trust is lost, central banks will lose the whole belief from the general public that the stock market represents the real economy.

7
What does Varoufakis mean by 'banks can make up money' in 'Talking to my daughter about the economy'?
0
If central banks become shareholders, where can investors go?
2
Do institutions buy debt with credit?
1
Why do banks loan at APR < 6%, when they can invest that principal in ETFs?
1
Why do commercial banks buy government bonds at negative interest rates instead of keeping cash?
3
Can banks 'create' money on their own or do they need help from other banks?