The convexity of an indifference curve results from the fact that the absolute value of its (negative) derivative, which is the marginal rate of substitution is decreasing. But why do we say that it's convex to the origin?

What is an implicit function that is convex and concave to the origin?

I think what people mean when they say "convex to the origin" (or to any point $p$) is that the function is convex when looked at in a new basis, namely the basis resulting from a rotation such that the new x axis (call it x') is, up to a constant, tangent to the IC and the distance $|p-IC|$ is minimized by that point of tangency ($w$). 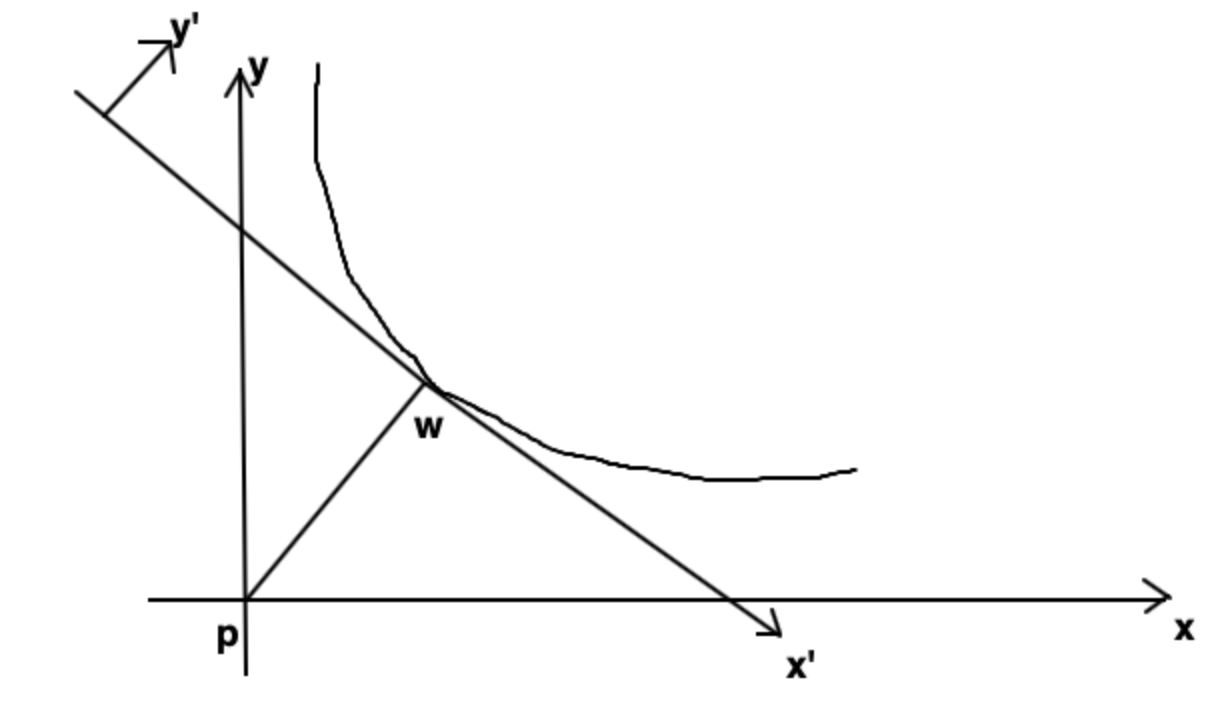 The expression tries to convey a visual notion of convexity. It is "convex to the origin" in the sense that if we "stand" at the origin, the point $(0,0)$, and "look towards" the graph, we will perceive it as convex.

In contrast, if we stand "above" such a graph looking towards it, taking "our" position as being the origin, it will be concave. This "relativity" I suspect comes from physics and the arbitrariness of the origin of the coordinate system there.

I too have pondered this question.

I found a neat definition from the book 'Existence and Optimality of Competitive Equilibria' by Charalambos D. Aliprantis, Donald J. Brown, Owen (see page 9). I quote it here:

"Mathematically, a 'convex to the origin' curve is described by saying that if $A$ and $B$ are any two points on the curve, then a ray passing through the origin $O$ and any point $X$ on the line segment $AB$ will meet the curve at most at one point $D$ between $O$ and $X$". EDIT - this should read 'at exactly one point $D$ between $0$ and $X$ as opposed to at most one; the author appears to have made an error. 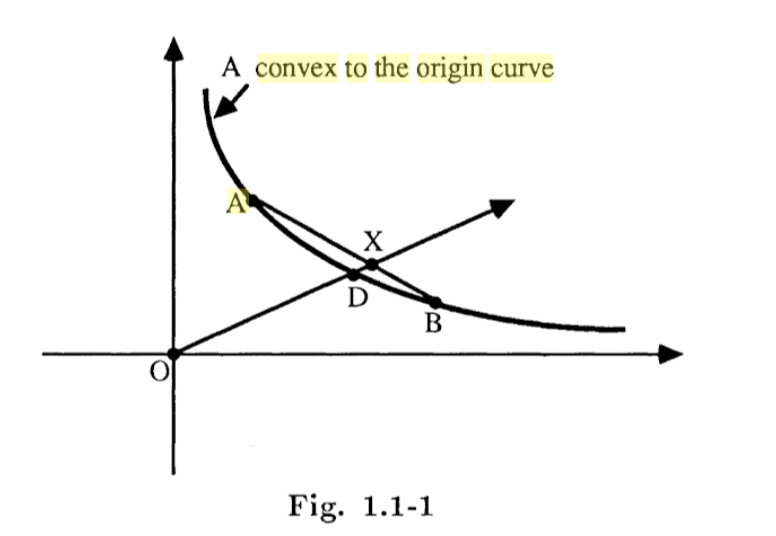 Under this definition, a curve shaped like the left-half of a U-shaped parabola, but never reaching a point at which its derivative is 0, is the type of nice convex to the origin indifference curve we dream about as economists. If we were to allow the slope of the indifference curve to become positive after some point then it will be possible to find draw a line from the origin that crosses two points of the curve, in which case the curve would not be convex to the origin.

Giskard is right, the definition would need to be amended to exactly one.

Note: this answer is more mathematically complicated than an undergraduate level, but I will try to give intuition as well.

I think it's easier to think about this problem in terms of preferences. A preference relation $\succsim$ over a set of alternatives $X$ is convex if $$x \succsim y \Rightarrow \lambda x + (1-\lambda) y \succsim y$$ for every $\lambda \in (0,1]$.

Basically, what this is saying is that if I like x more than y, I also like any bundle which is a mix between them better than y. So essentially, if I'm at y, then I'd like to get as close to x as possible with respect to y.

To visualize this, consider being at some value on an arbitrary indifference curve for convex preferences (e.g. Cobb-Douglass utility function). Pick another point which is on a strictly higher indifference curve. Then I can draw a straight line between the two bundles, and everything on that line is better than where I started. Graphically, this should be obvious, as everything between the two points should also be on a strictly higher indifference curve. Mathematically speaking, this is the same as saying that the upper contour set for x, $\{y : y \succsim x\}$ is a convex set for every x.

Look at this function below: 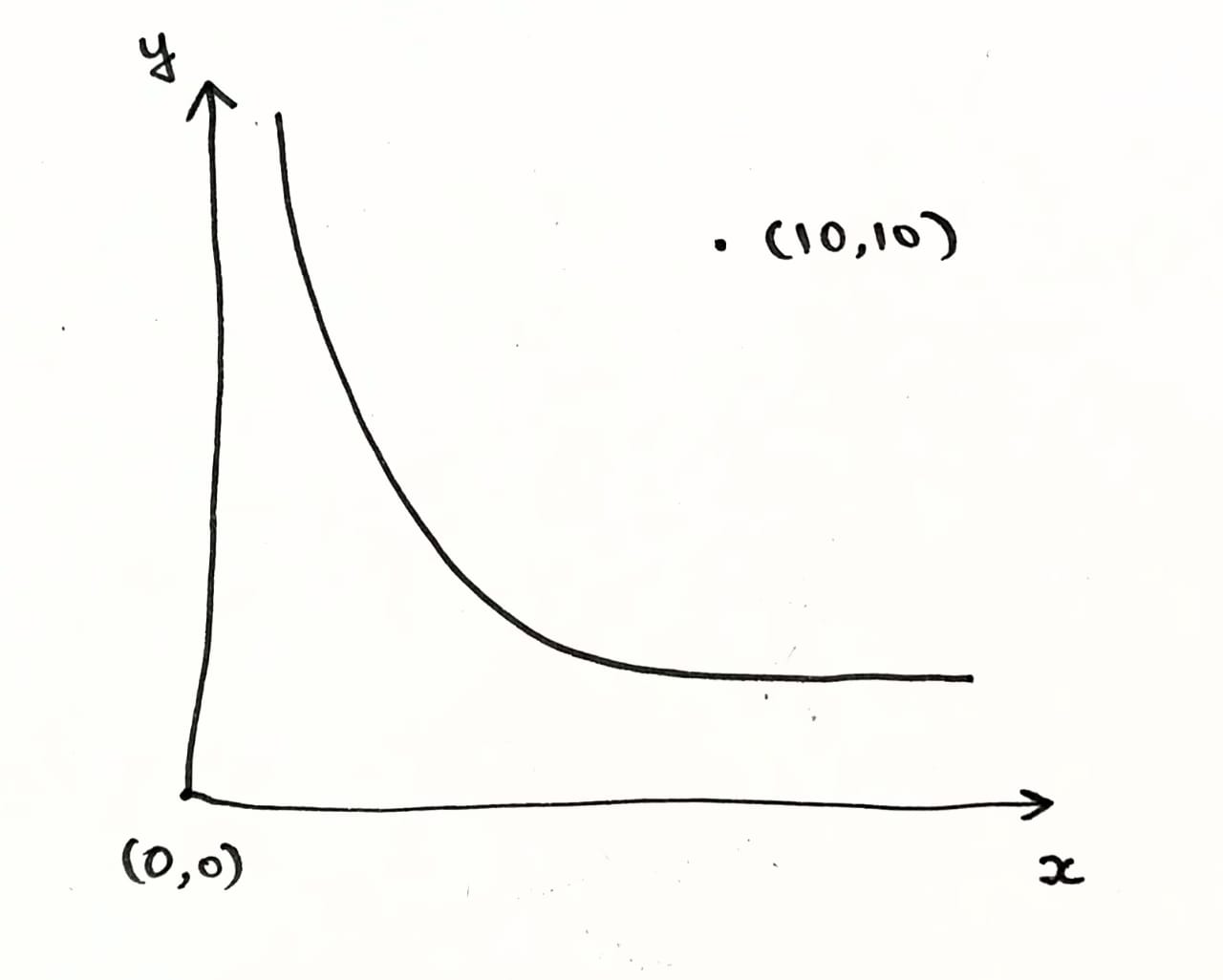 3
Marginal rate of substitution
7
Convexity of the Market Demand Function
1
Relationship between convexity and a perfect complements type utility function
1
Pure exchange economy with free and non-free disposal
2
Proof of monotonocity of preferences
0
Does quasi-concave utility function imply convex indifference curve?
1
How to describe a utility function in words?
4
Convenient S-shaped production function (i.e. with IRS and DRS) to derive a discontinuous demand for labor