Why does a reduction in money demand lead to a rightward shift in the LM curve?

In my textbook, it says Y must rise to restore money market equilibrium as the justification.

If the demand for money falls as the supply remains constant, there is excess supply of money. It is equivalent to an increase in the supply while the demand stays constant.

For a given Y (output/national income etc.) there is now a decrease in the equilibrium interest rate in regards to the previous LM curve. As money demand has fallen, people do not want to hold as much money as they would like. So they will transfer their money to the only asset available, bonds.

Important: There is an inverse relationship between the price of a bond and it's interest rate. 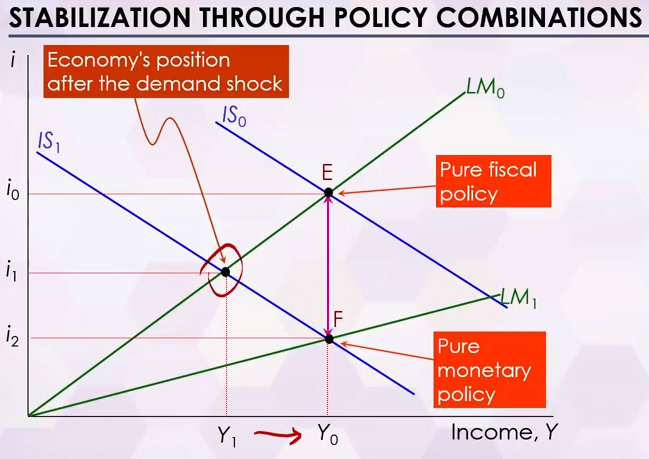 I always end up resorting to graphs to understand these problems, and the attached one might be helpful.

If the demand for money has fallen, it also means that there is less economic activity and economic income ($Y$) is falling. As the others have pointed out, this is tantamount to there being a surplus of liquid cash in the economy relative to what people want or need. You can see this decrease in demand for money in the graph, as we move from equilibrium point $E$, downwards along the $LM_0$ curve to the economy's position after the demand shock.

Next, we know that the interest rate will always move to balance the supply and demand of money (the theory of liquidity preference), so after the demand for money falls, the $IS_0$ curve will also shift downwards to $IS_1$ so that the interest rate will now meet our newly decreased $LM_0$ demand level at the point where those two lines intersect.

In other words, if you think of the interest rate as the amount of money it takes a bank to convince someone to give up the use of their cash assets (liquid and ready to be used now) by converting them into savings (which they can't use right away), we are now in a situation where people don't want or need to use cash for immediate economic activity (falling demand), so they're happy to convert all their surplus cash into savings bonds to get that high interest ($i_0$ level) payback later. Since there's too much cash in the economy relative to demand, it's far too easy to convince people to switch to bonds, so we don't need to use such a high interest rate as incentive, and hence the interest rate will drop ($i_1$, and we will reach a new IS-LM equilibrium as our $IS_0$ curve shifts down to $IS_1$.

The backdrop to all of this is that economic activity has slowed down. You can see this by looking at our new IS-LM equilibrium position after the demand shock, where the corresponding $Y_1$ position is less than what we had before at $Y_0$. We want the economy to get back to its activity levels before, however, so how do we do this given given the current interest rate ($i_1$) and money supply/demand levels? We can either use fiscal or monetary policy, but the question is about the $LM$ curve, we can just focus on monetary policy.

In this case, using monetary policy to stimulate the economy, the central bank could increase the money supply by buying back bonds. As it does so, the supply of money in the economy goes up further, shifting our $LM$ curve to the right. As the $LM_0$ curve moves to its new position at $LM_1$, our equilibrium interest rate drops further still ($i_2$) on the $IS_1$ curve to its new equilibrium point $F$, which should theoretically push economic income level back to its original point at $Y_0$.

There's a good video explaining all of this, which is taken from a two-part Coursera course on macroeconomics if you're interested (part 3 and 4 of the specialization).

Not the answer you're looking for? Browse other questions tagged macroeconomics monetary-policy or ask your own question.

4
Intuition behind the positive slope of LM curve : 'Income must increase'?
2
Why can't price level be negatively correlated with money demand?
3
Why must there be an equilibrium in the money market?
1
Monetary Policy - How can increasing interest rates cause higher inflation in the short term?
2
What is the effect of expansionary fiscal policy in case liquidity trap situation?
2
How does the money supply grow in the long term?
2
What does the Fed mean by “smoothening money market functioning”?