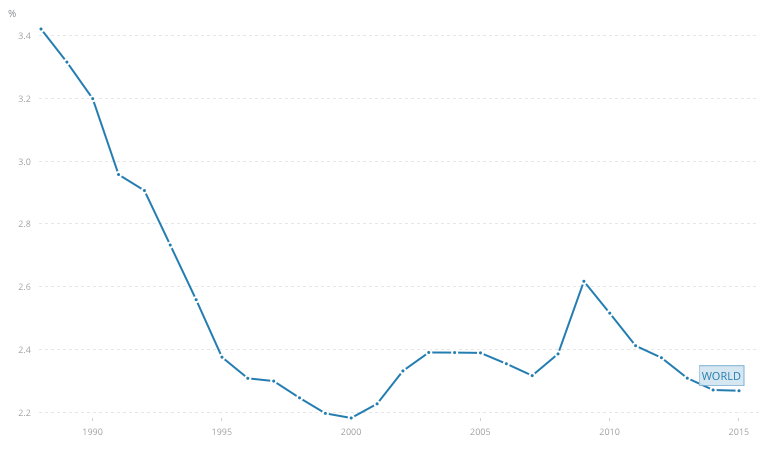 I am trying to find similar data over a much longer period of time. Over the last 3000 years would be ideal! Of course, I realize that such data might result from very rough estimations and might eventually be specific to a certain area of the world and arguably not representative.

Where could I find similar data over a much longer period of time?

This is a "there can be no adequate answer" answer, for periods prior to "imperialism as a world system." (Personally, I'd pick 1880s here, ymmv.)

Gross domestic product as a conceptual tool contains a number of assumptions about how economies function which are unsustainable prior to the generalisation of capitalism in the Marxian sense. While it might be possible to produce homologues for GDP in societies prior to "production" in the capitalist sense, these link poorly with the assumptions you wish to use GDP for. In societies without a generalised measure of value, production occurs in traditional manners. The state, particularly prior to Louis XIV era innovations, lacks the capacity to mobilise the economy to particular ends. This is to say, there is no "gross" productivity, and there is no capacity of a state to mobilise a percentage of productivity. The state acts as an agent amongst others in traditional relations of production to move portions of portions of social product to its ends.

Earlier the ability to talk about the state comes into question.

Apart from these issues of concepts of measure, there are issues with measurements themselves. Data series are incredibly fragmentary and difficult to interpret. Consider, for example, Measuringworth.com's data series on English wage/price series. The wages and prices originate in monastic records which were not typical of the relations between agricultural labourers and land controllers. Even the data points from "private" markets in labour here are suspect, 'with' or 'without' beer? 'With' or 'without' crofts being destroyed regularly? The customary nature of pre-capitalist economies makes data sets less and less meaningful numerically because of the number of externalities. Even if data points rigorously record the externalities ('with' beer, but 'with' destruction of waste communities of free peasants, and 'with' regular rapine due to civil war), other data points won't have adequate records.

The alternate way forward would be situational and context interpretive single case studies. To look at institutional stressor indicators due to war. Did dynastic families fail to reproduce, or were they subject to heightened baronial outrage; were peasant revolts common, what grains were eaten, etc.

We can't apply a stable category, due to categorical assumptions about capacity to mobilise economies and what is worthful being changeable. We can't gain equivalent data points, due to the complex structures of worth in the premodern.

6
Increasing prevalence of price discrimination
1
Energy Costs by Source over Time
0
What is a Labor Rate Index
5
Is there a reference that plots different countries' debt-to-GDP ratios over (long) times?
1
What's the highest percentage of output any country spent on its military?