Controlling for a variable in OLS - Stratification and Reaggregation. Simple Example

In his engrossing book "Naked Statistics" Charles Wheelan begins to explain how controlling for variables works by stratifying the sample. However, he stops short of explaining the reaggregation, leaving one intrigued by the stratification analogy but confused as to whether- and if so, how- it can be applied.

To be more specific, he is looking to isolate the effect of education on weight, by controlling for gender, height, and income. He imagines an experiment in which a number of people (constituting the sample) all gather in one place. Then the stratification begins:

What magic analysis would need to be performed using data of the people in each of these rooms, which then could be aggregated to obtain the regression coefficient which can be interpreted as the effect of the independent variable of interest on the dependent variable, after we control for the two binary variables? How exactly would the aggregation work?

While I found this question/discussion https://stats.stackexchange.com/questions/17336/how-exactly-does-one-control-for-other-variables interesting, controlling for a variable by its inclusion in a regression is insightful but not a very intuitive answer. Stratification and Reaggregation, if it is possible, shows quite a bit of promise of intuitive understanding.

Illustrative Example with Made up Numbers: On the left are the results of the simple regression of weight on education (after stratifying by income and gender) in each of the 4 rooms (each room with 15 people/observations), whereas on the right are the results of the multiple regression of weight on education, income, and gender (60 people/observations combined). 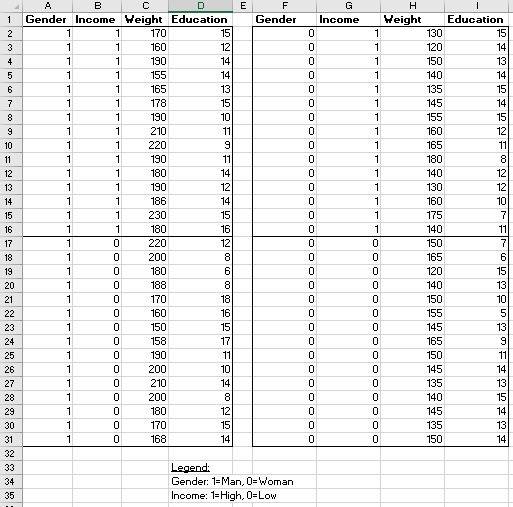 Browse other questions tagged regression or ask your own question.

2
How to get the effect of one dummy variable against many others?
2
Should the control variables in an econometric regression be correlated with both the dependent and the primary independent variables?
0
Can a complex interaction term mean more than what it's composed of?
0
How do I run a regression with the restriction that one set of parameters are proportional to another?
1
How do I obtain a correlation between two variables?
1
Log log regression with fixed effects and cross elasticity of demand