We know that in regular economies general equilibrium theory predicts a finite and odd number of equilibria, using the properties of the excess demand function and the index theorem.

How about the non-regular economies? From my understanding, these are the economies in which at least one price vector equilibirum generates a singular matrix of price effects. Geometrically, this can be interpreted as the excess demand function having a zero slope at one of the equilibria as shown in the picture below 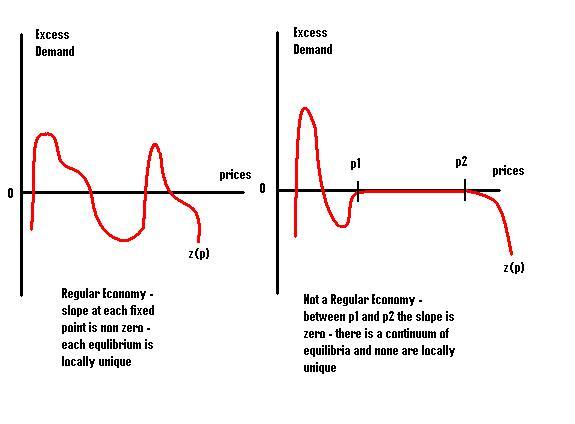 Can we say something more about the equilibria, in case they are a finite number? Do they need to be even, odd or there is no restriction?

@Afreelunch gave you the right intuition. Non-regular economies will exhibit an infinite amount of equilibrium points. Intuitively since there is no local uniqueness, the continuum can be expressed as an interval on the real line so there is an infinite number of such points.

Not the answer you're looking for? Browse other questions tagged general-equilibrium competitive-equilibrium or ask your own question.

3
Solving Ag=b with non symmetric A
3
Non-unique utilities in a competitive equilibrium
9
Competitive equilibrium in Leontief economies
2
Application of Intermediate Value Theorem for General Equilibrium
5
Could markets compute equilibria?
7
Pure exchange economy: Given an initial endowment are multiple equilibria possible?
7
How likely are the Sonnenschein-Mantel-Debreu results?
1
What guarantees that endowed agents have non-zero prices in an Arrow-Debreu Economy